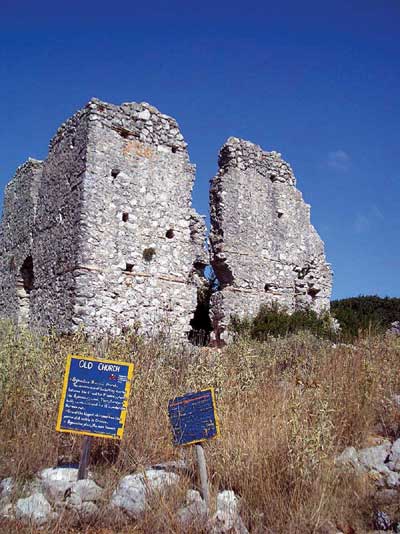 T here can be few places on earth that are more beautiful than the northern headland beyond Fiskardo on the Ionian island of Kephallonia. Within the arc of the medieval abbey located here, you can see Sappho’s leap to the north, the spindly western point of Lefkada; then, looking eastwards, up the straits to Nidri where Wilhelm Dorpfeld searched in vain for Odysseus’ palace, to the secluded islet of Skorpios where Onassis lived with Maria Callas, then Jackie O. Coming round, opposite Fiskardo, lies Ithaka, a long shank of land rising up steeply from the sparkling straits. Looking south, now, the fortified Hellenistic city of Ithaka sits out proud in the far distance, a place that Dorpfeld and his mentor, Heinrich Schliemann, also considered a contender for Odysseus’ home. Then to the right of the straits, the wooded slopes of Kephallonia, and finally, below the headland, the secret little harbour of Fiskardo, the island’s northern port in Greek, Roman, Medieval as well as modern times. This extraordinary arcing seascape was the last that the great warrior Norman, Robert Guiscard, saw. For here it was that he died in 1084, three years after a titanic sea-battle with the Byzantine navy in Albanian waters between Butrint and Durres.

Guiscard belongs to those legendary few who attempted to defy fate and conquer all before them. Described in the most odious terms by the Byzantine chronicler, Anna Comnenus, this impoverished northern Frenchman managed to capture Rome and a pope, as well as conquer most of southern Italy and Sicily. Byzantium, not unnaturally, was deeply intimidated by his self-possessed determination and, after losing Dubrovnik (Ragusa), fought doggedly to withstand his siege of Durres (ancient Dyrrachium), the Adriatic port at the start of the Via Egnatia, the trans-Balkan road that led to Constantinople. At Butrint Guiscard appears to have slighted the formidable western defences, traces of which we found in our summer 2004 excavations, before expelling the Byzantine castellan.

Fiskardo today is a little village serving yachtsmen from all over Europe. At night English, French, German and Swedish can be heard in the busy tavernas. Guiscard might have approved. The new Europe is as cosmopolitan as his was. Yet strangely no-one takes note of the great man’s connection with Fiskardo or even, more to the point, the fact that the port, though Hellenistic and Roman in origin (see Klavs Randsborg’s massive survey report on Kephallonia published in 2002 for more details), takes its name from the French warrior who died here. The sublime trail past the deserted lighthouse to the abbey itself is overgrown and unmarked. The stumpy twin towers and short nave of the main church are well preserved. Architecturally it is quite different from the Byzantine basilicas of mainland Greece in centres like Arta and Kastoria. Instead, its broad, low nave resembles the massive cathedrals of Apulia and Sicily, shrines associated with Norman pre-eminence.

A makeshift little sign tells the visitor that the church is Norman, but offers no word on its most celebrated associate. Instead, it commands one to visit the museum. Perched above the harbour overlooking a line of brick-built Roman mausolea along the shoreline (currently under excavation), the museum is in a brightly painted building resembling an archaic temple. Today, though, is a national holiday, so notwithstanding the influx of well-heeled tourists to Fiskardo, the museum is shut…

No better spot can exist as a final resting place. Perhaps the ghosts of Romans and Normans who ended their lives here are content with its dazzling beauty. Yet in a Europe whose citizens are striving to cross national boundaries, it is strange indeed that no Greek official has offered even the simplest of memorials to one of the greatest travellers ever to have passed and then stayed here. But, then, even for Byzantium’s modern heirs, the Normans remain implacable opponents.