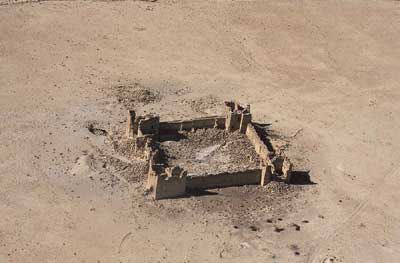 In the 1930s, the French Jesuit priest, Père Antoine Poidebard, astonished and delighted the academic world with the publication of his La trace de Rome dans le désert de Syrie (Paris, 1934). In the volume of plates, the reader could leaf through page after page of stunning views of lonely Roman forts, roads and frontier towns, all taken from early biplanes. At a stroke, Poidebard had mapped the frontier of Roman Syria – or at least a palimpsest of successive frontiers. In 1945 he looked more widely at Syria from the air (Le Limes de Chalcis, with R. Mouterde) and in the meantime he had stimulated the interest of the great British orientalist and explorer, Sir Aurel Stein, to do his own survey of Iraq and Transjordan in 1938-39 with the aid of the RAF (finally published in 1985 as Sir Aurel Stein’s Limes Report, eds D. Kennedy and S. Gregory, Oxford, BAR Int. 272. But then aerial archaeology across the entire region ground to a halt.

Both of us had the privilege of being taught at Manchester by the late Barri Jones. He had his own copy of Poidebard’s book which he generously lent students sharing his passion for aerial archaeology. Both of us, moreover, had a keen interest in the archaeology of the Middle East. After numerous attempts, persistent efforts paid off in 1997 and a revival in aerial archaeology began in a part of the world where it had been pioneered. In that year, with the support of Prince el-Hassan (brother of the late King Hussein) and Brigadier General Prince Feisal (brother of the current king and now Commander of the RJAF) we had the first of a series of annual flights which have continued to this day.

In most years we have been flown in helicopters of the RJAF (Hueys and Super Pumas) and to date we have flown 8 ‘seasons’ and a total of 82 hours. We have flown into every corner of the country from the panhandle in the east to the Jordan river, the Syrian frontier to the Gulf of Aqaba. The lasting impressions of observing this wonderful country from the air have been the density and variety of the sites and landscapes: the steep rise up from the Dead Sea (the lowest point on earth) to the deeply gorged limestone plateaux make a sharp contrast to the large areas of desert and the more rolling Mediterranean landscapes of the northwest. More surprising is the threat to the sites, often in remote areas; the bulldozer has penetrated everywhere and Jordan is a fast developing country, so our work may be recording sites for the first – and last time.

Sites of every kind and period have been photographed and we now have several thousand images recorded on colour slide film, black and white and colour print and on both 35 mm and medium format. In 2003 we were able to add some footage taken on a digital video camera. Access to the photographs is possible via the authors (in Britain or Australia) via the Council for British Research in the Levant (Amman), the Department of Antiquities (Amman), and in London through the Palestine Exploration Fund (from mid-2004). Film lists are available on the website: http://www.arts.uwa.edu.au/Classics/ archeology/apamea/index.html

Initially the objective was simply to record some 200 of the better-known sites representative of every period, from prehistoric ‘kites’ to Ottoman Pilgrim forts. That has remained an objective every year as we enlarge the list of sites for recording. We have also expanded our aims, however, to include experimenting with the technique in terms of seasons and times for flying, as well as systematic exploration of precise areas simply looking for sites or monitoring sites (particularly those areas under threat) and – in conjunction with old vertical coverage – mapping of specific features. One objective was always to integrate the archaeological research with the needs of a small developing country. The Nabataean city of Petra and the Roman Decapolis city of Jarash are well-known, but Jordan has much more to offer in its remarkable cultural heritage. How better to present that treasure house of material than through colour counterparts of the images with which Poidebard had delighted his readers 70 years ago? The outcome – after a series of academic and popularizing articles – is our book: Ancient Jordan from the Air (CBRL, London, 2004 – £30 plus p&p via Oxbow). The images here are a taste of what may be found in the more than 200 colour photographs contained in our book, many of them A4 in size.

The flying continues. We had an eighth season in May/ June 2004. A Workshop on Aerial Archaeology in Amman is planned which would be open to Jordanians and people from neighbouring developing countries. Hopefully, Jordanian archaeologists will join us in this work and make it a local, sustainable activity.

Acknowledgments: The authors are very grateful to the Royal Jordanian Air Force for their help over the years, to the Director General of Antiquities of Jordan, Dr Fawwaz Al-Kraysheh, and all the staff at CBRL in Amman. To all the funding bodies, especially the Australian Research Council and the British Academy. Finally without the indomitable support of Francesca Radcliffe the photographs would not be as available as they are and the recent seasons would not have been possible.