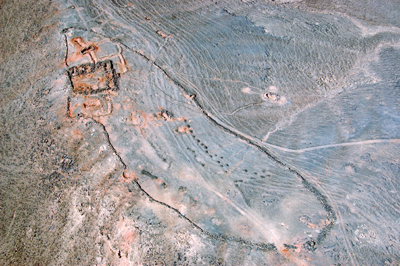 The Royal Flying Corps pilots based at Aqaba from 1917 got used to making do. The eyes of the brass hats in Whitehall were focused on the trenches of the Western Front. There, the European killing fields soaked up men and material at an alarming rate. But still they were prioritised for the pick of the kit; so while their comrades enjoyed detailed maps and aerial photographic cameras, the Aqaba pilots were left to plot enemy positions using a blank piece of paper and a pencil. But this lo-tech solution did the job, so well in fact that 90 years on, following their discovery in an archive, the plans are seeing service once more.

The Great Arab Revolt Project (GARP) is investigating the archaeology of the conflict that took place in southern Jordan from 1917 to 1918, when Arab forces, lead by T E Lawrence (Lawrence of Arabia), attacked the Hijaz Railway and the extensive Turkish Ottoman fortifications that defended it (see CWA 23, 27 and 39 for previous reports). Built on the orders of Sultan Abdul-Hamid II from 1900-1908, the railway was originally intended to ferry pilgrims from Damascus to Mecca. Never completed to its full length, ultimately its second military role became more important. Over five seasons, a small team of archaeologists has explored, mostly on foot, the 70 miles of railway from Ma’an to Mudawarra. Guided by the Royal Flying Corp sketch maps, the team has sought out Ottoman fortifications and campsites built to defend the railway at the time of the Arab Revolt. Within GARP this work has become known as ‘Walking the Line’.

During those long days on foot, we often talked about the benefits of flying, and viewing the archaeology from above. This remained no more than wishful thinking, until last season when long negotiations and the generosity of the Jordanian Royal Family allowed us to take to the air and reconnoitre the railway line from a military helicopter. So, in November 2010, I found myself sat in the shade by a security post waiting to be admitted to a heli-pad; realisation that the day we would fly across the desert had arrived was greeted with increasing excitement and trepidation. Our group was ushered into a compound where a chaotic medley of fire-engines, anonymous 4x4s, and armed guards were assembling. Then our transport for the day descended: the Puma had landed.

Before long we were strapped into seats by the open rear doors as the helicopter blades began to spin. The flight plans had been laid the previous day when I spent 20 minutes perched on a desert rock, trying to convert grid references into latitude and longitude, while overcoming a crackling and intermittent mobile phone signal. Now, I would find out if the message had got across, because, as well as taking photographs, I was to be the flight navigator, talking to the pilot through a headset that mercifully cut out the incessant penetrating din of the engines. In many ways, I had prepared for this flight a thousand times, pouring over the satellite images on Google Earth. But this time, instead of skimming over a virtual world, I was controlling a flight over a real landscape: the ultimate backseat driver.

We took off in a cloud of red dust. As the ground dropped away I urgently scanned for familiar sites, but this was a new environment. Landmarks that I could recognise easily on the ground or on Google Earth looked different from this angle, and it was only when a distinctive shape caught my eye that I finally orientated myself. Described by Lawrence as the crescent of Jebel Semnah, this distinctive feature was the site of an Arab victory over the Ottomans in 1918. Now that I had my bearings, we set course for our first objective of the day: Waheida. This is the site of three Ottoman hill-top redoubts, and also the great camp site of Emir Feisal’s Northern Arab Army. All along the wadi, faint stone lines mark the footpaths and tents of the army’s different tribal encampments. This site, although known to local Bedouin, had proven elusive and was only found as a direct result of the Royal Flying Corps’ sketch maps. I asked the pilot to fly around the hill tops and make two passes of the camp site before we headed back to Ma’an, for a flight over the Al-Hussein Bin Talal University to take some aerial shots for our Jordanian colleagues.

In Ma’an we picked up the line of the Hijaz Railway. Now we were following in the slipstreams of our RFC predecessors, guided by the same navigational landmark that had aided them, and seeking out the same targets. Following the railway south, we flew over the former Ottoman garrison of Ma’an Station and frontline trench system at the Hill of the Birds, our first area of investigation for the project five years ago; seeing it from the air illustrated the true extent of the Turkish defences. Further south, we passed a pile of white rubble – all that remains of Ghadir el Hajj station. Then I was told we needed to detour east to refuel. As the helicopter turned away from the railway, it lost height. Unaccustomed to flying fast and low over undulating landscapes, the whole experience became surreal as the pilot, singing Arabic verses, skimmed the desert floor, demonstrating his low flying skills, or perhaps just treating his unusual passengers to an experience they would never forget.

Back over the railway, the next familiar landmark was Bir el Shedia station, which boasts a collection of early railway wagons that often form the backdrop to our team’s group photographs. Beyond lay Makins’ Fort, a hilltop fortification that provided an Ottoman strongpoint between the stations, and protection for the otherwise tempting target of a large, multi-span railway bridge. The project named this feature after the RFC pilot who first sketched it on a plan in 1918; the local Bedouin name translates as ‘tent-pole camp’, after the poles the Ottomans cut from trees in the wadi below the fort walls.

Continuing to fly south, we passed several small fortifications that we surveyed two years ago, and flew over the remains of Aqabat Al-Hejazia station. Today, it is shrouded in white dust from the nearby phosphate works. Next came the site that we were all looking forward to: the hill-top fort of Fassu-ah Ridge on the dramatic Batn Al Ghul escarpment. This great scar in the landscape marks the point at which the stony grey limestone and flint desert gives way to an explosion of colour from red, yellow, and brown sandstones. For hundreds of years this was the edge of the familiar world for Hajj pilgrims heading to Mecca in their caravans. Once the escarpment was crossed, the pilgrims descended into a mysterious, shape-shifting world. Believed to be a realm of ghouls, it was known in the 19th century as ‘the strangling place’.

As we approached the escarpment, the striking panorama of Wadi Rutm was laid out before us. The Puma flew a left and then right circuit above the impressive fort that dominates a series of hairpin loops in the railway line. From the air, it was possible to clearly see the original Medieval fort at Fassu-ah Ridge, the outer perimeter wall constructed by the Ottoman forces in the early 20th century, and the complex system of walkways and footpaths that bring order to a chaotic landscape. Having completed the photography at Fassu-ah, we flew over the ridge and down into the sandy Wadi Rum, following the railway to our destination for the day, Tel el Shahm. En route, we photographed what has become the team’s favourite site, Wadi Rum Station. In previous seasons, we have undertaken standing building recording at this site and explored the Medieval Hajj pilgrimage route. At his point in the wadi, the three routes used by the pilgrims run parallel: the original caravan route with its prehistoric origins, the early 20th century railway, and the modern highway.

Arriving at Tel el Shahm we circled the hilltop fort where our colleagues were working, and landed close by. After a splendid Bedouin-style meal, we set out once more to capture video footage of the landscape, before flying to Aqaba, across Wadi Rutm, for another refuelling and our goodbyes to the pilot and crew. This was the most dramatic sortie of the day. Following the path of the setting sun and skimming across the sandstone peaks, it gave a real sense of what the RFC pilots had endured in 1918. Flying their primitive machines, they struggled to cross these peaks and return to the safety of the advanced landing-ground hidden in the valleys of Wadi Rum. But, thanks to the sketch maps, their work lives on.