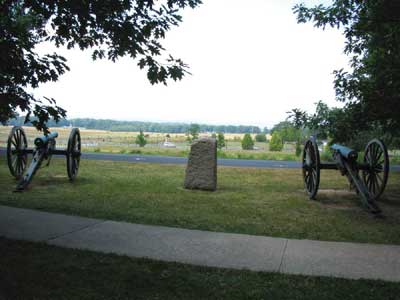 The Battle of Gettysburg in July 1863 set a brutal standard, ushering in modern warfare. But in the aftermath of the carnage, it has also become a benchmark for defining the motives for the battle as well as for charting the movements of the myriad maneuvering units. As early as the late 19th century, parts of the sprawling hilly terrain were purchased to be protected. Very soon, monuments were erected, marking the first stab at a form of museology for curious Americans as well as veterans. These first tentative steps led to the makings of the first visitor centre in the 1970s with a celebrated cycle diorama, an artistic innovation of the 19th century in which vast landscapes were reconstructed for public display. The National Park Service then set to purchase as much of this lush farming land as it could, demolishing the ribbon development drawn to the place – as so often is the case at cultural heritage landmarks. Down came a petrol station. Other mall-like buildings were erased too, returning the place to something close to those times of the epic battle. Now, the museology at Gettysburg is beginning a third iteration.This spring a new $135 million visitor centre opened, and this September the celebrated diorama was conserved and opened to visitors as well.

In 1863 Gettysburg was an undistinguished farming town in western Pennsylvania, much as it is today. Its fame rests on two brutal days in July when the confederate army, close to the zenith of its rebellion against the union, made a bold attempt to enter the heart of President Lincoln’s domain. Their arching movement was blocked on this battlefield in a struggle involving hundreds of thousands, and from thence onwards the confederate cause declined. The high water marks, as so often in great battles, focused upon two great – and extraordinary sacrificial – charges made by the confederates at Cemetery Ridge and Little Round Top. Both ended in carnage.

Today, the park is surprisingly understated, with few signposts and no obvious razzmatazz. The new visitor centre is tucked in woodland where the Union reserves were stationed during the battle. However, the car-parks are huge – sufficient to accommodate a thousand or more gas-guzzling SUVs as well as coaches. And in June, on two consecutive mornings, the place was full. The epic history draws family groups mostly and, as I was to hear repeatedly, all seeking some connection through their home militia with the soil where their ancestors fell. The architecture of the new building pays homage to the red-roofed barns that distinguish these farmlands. Inside, there is a huge concourse, an even bigger cafeteria oozing the aroma of fried foods, and a well-stocked shop with ample books dedicated to every conceivable angle of the three-day battle.

But the new elements are the theatre showing the 30-minute film – The New Birth of Freedom – and the museum/exhibition. Both are extraordinarily well done. The film, of course, strikes the American nerve with its theme of freedom, especially as it is narrated by the familiar voice of Morgan Freeman. Confronting slavery constitutes the start and close of the film, with the dizzying tactics of the battle filling the middle section. It strives to sucker you into the compelling drama, and, reeling, I stood up as the credits rolled to realise that not one Afro-American was present in the audience. The museum takes the same form, bookended by the issues that generated the conflict, then an exhibition of the archaeology and images of this titanic struggle. Few visitors bothered with the beginning or end; most were captivated by their home state’s history at Gettysburg.

With Barack Obama playing an historic part in the modern USA, the last five-minute film in the exhibit was more than timely since it reminded visitors of the problems for freed slaves after the civil war and the passing arc of a century before the civil rights movement in the 1960s. I noted, too, that the vanquished – aside from General Robert E Lee – were virtually airbrushed out in the ‘what happened to them afterwards’ panel. So, confederate President Jefferson Davis was incarcerated then freed. In short there was a confused aftermath for whites and blacks, which coalesced for the former in the determination to make the park as a memorial. The extraordinary photographs of the 50th anniversary reunion in 1913 form an appendix to the exhibit. In all, 50,000 grey-bearded veterans attended. At the 75th anniversary attended by President Franklin D Roosevelt there were 2,000 veterans with an average age of 93 years.