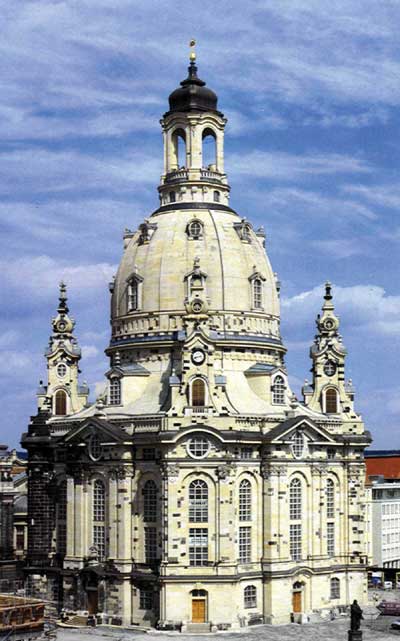 It is 9am on an April Monday morning and I am on the Augustus Bridge in Dresden. The swollen River Elbe slides beneath the bridge at alarming speed. The slithering mass of water having been generated by warm rains falling on the snowy mountains of Bohemia. And though Dresden’s spectacular skyline of domes and spires seem haughtily indifferent to the currents, the city’s feet are already soaked by the pewter coloured mire as the still-rising river laps over the lower terraces and garden kiosks.

For a Monday morning, the Augustus Bridge is remarkably empty – few pedestrians brave the slashing winds over the river. Only Augustus the Strong and his prancing horse, both heavily gilded against the weather and the vicissitudes of history, retain their determinedly sunny equanimity.

Having crossed the Augustus bridge, I reach the shelter of the Altstadt – the ‘Old Town’ and historic core of Dresden. (Though perversely the Neustadt ‘New Town’, on the northern bank is the site of the even older Slav settlement known as Drezdzany – or ‘forest dwellers in the swamp’.)

Everywhere in the Altstadt are cranes and scaffolding, and it feels as though the city is in a race to reinvent itself, much like many other European cities (and here I am reminded of Liverpool) that have experienced – and still experience – hard times.

Within the Altstadt, I enter a square full of builders’ portakabins piled three high. Buildings are shrouded by a great hoarding dominated by an image of a Porsche Boxter speeding through an unrealistically empty landscape. The hoarding triumphantly announces ‘Tradition und Innovation Wohnen, Arbeiten, Shoppen. Das neue Leben im QF (Frauenkirche Quarter) erleben’ [Traditional and innovative living, working and shopping. Experience the new life in the QF (Frauenkirche Quarter, or the quarter of the Church of Our Lady)’.]

Nearby a massive hole is full of cranes, lorries and earth-moving machinery. Another hoarding informs us that by 2007 seven exclusive Burgerhauser, will have arisen ‘mit historischer fassade’ [with historical facades]. The Dresden authorities have entirely erased the Cold War concrete block, housing the police station, which previously occupied the site, for something considered more appropriate to their current vision.

History can be an odd business. It is sometimes difficult to see beyond the façades. We elevate some events, characters or epochs into the searchlight of our collective memories where they battle, in the words of one Dresden historian, in ‘the interplay of memory, myth and reality’.

One such event is the bombing of Dresden on the night of 13th-14th February 1945.

Some facts are clear: 796 Lancaster aircraft of RAF Bomber Command, in two staggered waves to maximise chaos, dropped 2,646 tons of incendiaries and high explosives mainly on the city centre. A few hours later desperate survivors came under attack again from 316 US bombers. The resulting firestorm ravaged an area of thirteen square miles. The ‘Florence of the Elbe’ was a smouldering wreck. Thousands of people, mostly civilians, died by suffocation, incineration and explosion or were crushed by collapsing masonry.

For the Allies, Dresden seemed like the perfect raid: the weather conditions were almost ideal, their distraction tactics confused the Luftwaffe, Dresden’s civil defences were shambolic and its anti-aircraft guns had been moved to the Ruhr and the eastern front. The RAF’s ‘master bomber’ was able to circle the city almost languidly, choreographing the incendiaries into their deadly clusters.

For Air Chief Marshal Sir Arthur Harris the Dresden raid was not particularly out of the ordinary ‘One among many other highly effective operations’ he called it.

For Harris, Dresden was a similar operation to those carried out by Bomber Command on 69 other German cities between 1942, when he took over as Commander-in-Chief, and 1945. Statistically he was right: in Hamburg and Cologne greater proportions of the civilian population died and more buildings were flattened than in Dresden.

But Dresden is the raid everyone remembers. Why? Was s it because of guilt, successful Nazi and Cold War propaganda, exaggerated casualty figures, and regret at the destruction of a magnificent cultural centre within a few weeks of the end of the War?

There is one building that symbolises Dresden’s agony – the Frauenkirche. Ten years ago this baroque masterpiece was a massive pile of rubble out of which projected a couple of stark fragments of wall. Now, thanks to a potent mixture of local pride, determination and international financial assistance, the Frauenkirche has been magnificently resurrected; the Phoenix has risen from the ashes.

It would be easy to see this as a post-reunification triumph of democracy and capitalist energy following years of bureaucratic neglect during the Communist domination of the GDR until 1989. But the reconstruction of Dresden is not quite so simple.

As early as September 1945, when the city was under Russian control, restoration began on such iconic historic buildings as the 18th century Zwinger complex and Gemäldegalerie. Housing and hospitals were essentials but the major historic buildings represented the culture and identity of the city. The Soviet authorities were keen to emphasise their civilising credentials – in contrast to the barbaric Nazis and the ruthless Allies who had brought destruction to the city.

A few minutes walk from the Frauenkirche is Dresden’s Kulturpalast – not an architectural masterpiece perhaps but an interesting historical witness nonetheless. Today this Soviet palace for the entertainment and edification of the people advertises upcoming concerts – you can soon catch James Last and his Orchestra or Roger Whittaker. Dresdeners who once hosted Wagner now seem to prefer easier listening.

The Kulturpalast has five pairs of cast bronze doors – inspired by the Baptistry doors of the Duomo in Florence I suppose. They tell the story of Dresden from its foundation in 1206 (this year is the 800th anniversary) to its Soviet resurrection.

The two most prominent central doors (above) depict the shattered city of 1945. Dejected Dresdeners squat forlornly in the ruins, heads in hands until one of their number reaches hopefully towards a star that rises in the east. Happy locals welcome soviet troops, hopeful couples hold hands and doves circle above; beyond, the rectilinear blocks of a socialist utopia rise from the rubble.

This may be naïve propaganda to a generation with 60 years of hindsight (and experience of tower blocks) but it does reflect the post-war determination to create a modern city.

The Soviet authorities were not alone in taking advantage of bomb damage to rebuild for a new world. In Exeter, Plymouth and Coventry, in France and Germany planners admired the new and the functional; Le Corbusier’s disciples thought little of the old. Only major historic buildings might merit a new lease of life, if they could earn their keep as cultural centres for the people as museums, concert halls or theatres. The 1950 ‘Sixteen Principles of Urban Planning; out of Moscow via Berlin, set the framework for Dresden. The Plan took precedence over bourgeois aesthetics. At least in theory.

In practice the East Germans were quite architecturally conservative and retained damaged historic buildings where Western planners and developers often seized the opportunities to clear away such inconveniences. Communist East Germany came to make a virtue of conservation. As the newspaper Neues Deutchland declared in June 1950: ‘We are defending our national heritage against its destruction by imperialist American ideology and against its barbarisation by Boogie-Woogie culture’.

As a result of this attitude the GDR directed substantial resources towards the reconstruction of key buildings such as the Hofkirche, the Zwinger and the cultural complex along the Brühl terrasse. These were now symbols of German creativity. To mark the 750th anniversary of the city the East German Minister-President announced ‘Dresden must retrieve its old status of ‘City of Culture’. The GDR will help Dresdeners achieve this!’

But progress proved to be slow. The Semper opera house only reopened in 1985. The Frauenkirche remained a pile of rubble, an official memorial to the barbarism of war. As a result it was not cleared away, like the Sophienkirche, alongside the Zwinger, which fell victim to the increasingly hardline urban planners of the 60s GDR.

It is now 10.00 am on an increasingly chilly Monday morning and there is already a queue to enter the newly reopened Frauenkirche. While the column of mainly elderly Germans waits patiently, groups of young children play around the base of Martin Luther’s statue in the square. The bombing raid on Ash Wednesday left him toppled on the ground but now he is back on his podium, alongside Lutheranism’s greatest monument.

When Frederick Augustus-the-Strong came to the throne of Saxony he aimed to imitate his Roman namesake, the emperor Augustus, who rebuilt his city in marble. Frederick Augustus also had Louis XIV as a royal role model and his Grand Tour of Italy filled his head with grandiose architectural ideas. The Venetian domed church of Santa Maria della Salute could be recreated on the Elbe. The Frauenkirche, however, is a Protestant church, designed by Dresden master carpenter Georg Bahr in 1722 and completed in 1743.

Entering the church I am quite shocked. This is no monument to austere, northern Puritanism; it is like being inside a wedding cake or an opera house layered in gold, pink, cream, blue and pistachio. And, of course, everything is spanking brand new. This style of architecture is not to everyone’s taste, but, like an enormous ice cream, it inevitably makes people feel cheerful. Only the concentrically arranged pews, still smelling of new wood, are plain. Small brass plaques memorialise the donors: my seat, 20 in row 11, was paid for by Helga Hääs of München.

The unterkirche below, is a complete contrast – a series of plain, vaulted stone groins grow out of the original foundations. In the centre is a stone altar made by the British sculptor Anish Kapoor. This massive block of grey/black Irish limestone is rough hewn on the outside and polished on the top surface. A central void disappears into the rock itself – is this an altar, a font, a channel into the earth, a womb or a foundation stone? The rock is both hard and soft, tactile and strong. Everyone who enters while I am sitting sketching comes and lays their hands on the altar.

Climbing back up into the main church I am confronted by a congregation of about 1500 people waiting for the noon service. As they sit around a circle I can see almost all their faces. The newly built organ reverberates through the space. I always imagined Lutheranism would be gloomy.

Cynics have called Dresden ‘Disney-world on the Elbe’. Reconstruction is usually controversial; pastiche can so easily be the first resort of the unimaginative. At the Frauenkirche great efforts have been made to be archaeologically accurate, to reuse original material, utilise superb craftsmanship and stick to the Charter of Venice principles.

As a schoolboy in Coventry my first archaeological excavation was alongside the ruins of the medieval cathedral bombed by the Luftwaffe, and the magnificent new one designed by Sir Basil Spence. Coventry Cathedral has worn well. It remains to be seen how Dresden will develop; if reconstruction can breathe life into the city. But Dresden has come back from the dead before. In the mid 18th century Bernando Bellotto (Canaletto) painted a series of views of the city – typically elegant, stylish, well-ordered. And then in 1766 a shocking image of the city in ruins. The Prussians had arrived.

Thanks to invaders, bombers, fires, developers, idealists and egoists cities constantly have to reinvent themselves. It’s a brave person who predicts the formula for success. But at the moment a lot of cities are relying on history, culture, architecture and shopping – not necessarily in that order. Thanks to Augustus-the-Strong Dresden has the buildings and the magnificent museum collections to put it back firmly on the European cultural map.