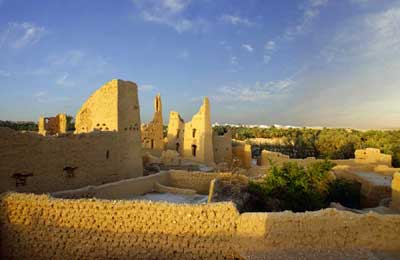 David Turner spent 10 years working in Saudi Arabia as a designer, multimedia director and documentary film maker. Here he takes us to one of his favourite Arabian sites: the sand-blown desert city of Diriyah, 20km north west of Riyadh.

Diriyah has a fascinating history. It was the seat of the first Saudi royal dynasty from 1744, but it came to a bloody end in 1818 when it was besieged in the Ottoman-Saudi war. Diriyah also lies conveniently close to Riyadh (where I used to live) so I was keen to seek out this forgotten site for myself. Situated in the centre of a verdant oasis, I discovered a city replete with spectacular mud-brick architecture and sultry palm-lined avenues. I think it is one of Saudi’s most spectacular yet ultimately little-known historic sites.

Be sure to visit the At-Turaif Bath House. Built during the site’s hey-day it is made entirely of mud-brick, all carefully protected with waterproof plaster. It was supplied with water from a near-by wadi Hanifa and must have been a luxurious oasis from the heat of the mid-day sun.

…and what should they avoid?

Avoid going at mid-day as it gets incredibly hot with temperatures hitting the low fifties in the summer months.

Be brave: go inside the mud buildings. But be sure to take a torch since they get pretty dark – and avoid walking in the centre of the rooms since floors are unstable and you could fall through. Then take the stairs to the roof to enjoy a spectacular view of the whole city – which is still remarkably intact – and of the vibrant oasis that surrounds it.

What else do you think may be hidden at the site

Evidence of the blood-fuelled siege that ended the life of the site? Certainly, a very simple burial ground with many unmarked graves lies on the outskirts of the city.

What element of its history most intrigues you?

The adobe construction of the city is most interesting. The entire city was constructed using wattle and daub made from straw and palm fronds. Once dried, this concoction is extremely resilient. The city has weathered many violent storms and still looks pristine. Many of the modern buildings in Riyadh fair less well.

What are your future hopes for the site?

As of 2009, the site is undergoing a renovation programme and will apparently be shut for the next couple of years. I hope that the renovations will be done in a sympathetic manner and I look forward to the possibility of filming at the site – since this is a very three-dimensional and evocative site.
The Saudis are working hard to create a tourist industry in the Kingdom so I would urge those interested in archaeological travel to consider visiting – because of the Kingdom’s general inaccessibility, most of the sites are remarkably untouched and free from jostling tourists.

What is your lasting memory about the area?

Despite what you hear, Saudi is ‘women’ friendly. I spent many hours guiding mixed groups of friends around the old mud city. We were never bothered. On the contrary, if we did ever bump into a ‘local’ they were always pleased that we had an interest in such a place and wanted to tell us more about it. I recall one old man insisting we drink tea with him deep into the night while he told us tall tales of the netherworld djinns of Diriyah…