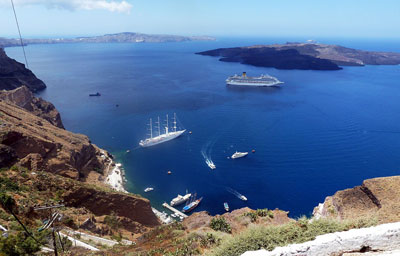 On the letters page of CWA 52, Martin Davie asked for more information about Thera. Well, Martin, I may just be able to help. As many of you will know, I am devoting my semi-retirement from Current Archaeology to writing a History of the World – well, isn’t that what everyone does in their retirement? – and have just finished the section on the Minoans, with a special page on Thera.

We revisited Thera just two years ago… by mistake. We had been to Crete to look at all the Minoan palaces, and were travelling on to Naxos for its idyllic sandy beaches. However, when we got to Thera – halfway between the two – the Greek Merchant Navy went on strike. So, we were marooned there for the night and following day. It was a welcome opportunity to take another look around Thera’s sites. Thera (called Santorini by the Venetians, or modern Thira) is a spectacular volcano where the rim and central core rise out of the water, but the rest of the caldera is covered by the sea. We were told the sea here is so deep that often tourist boats cannot moor, as their anchor chains are not long enough – though this may be a myth. Anyway, sometime in the 2nd millennium BC, the volcano exploded. I used to believe this meant the whole of the top blew off, and that the shape we see today was formed at this point. But in fact the explosion was nowhere near as dramatic and today’s shape has existed for a much longer period of time. The eruption in the 2nd millennium simply added a top layer to the present rim. It did, however, bury a city on Thera called Akrotiri. Akrotiri was extensively excavated by Spyridon Marinatos, Director-General of Antiquities for the Greek Minister of Culture, who worked there until his death, on site, in 1974.

We met Marinatos in 1968, when we first went to Greece on what was, in effect, a delayed honeymoon – see the special Greek issue of Current Archaeology #7, CWA’s sister magazine. He was a controversial figure because he supported the Colonels, who had carried out a coup d’Ètat and were ruling Greece at the time – though they later fired him, nonetheless. Sailing into Thera is always a dramatic experience, seeing the layers of ash that make up the vertical cliffs. From the narrow harbour, there is a steep zig-zag path to the top of the cliffs – or a five-mile drive along a more congenial road – into the chief town of Fira. Here, the major building is the magnificent White Orthodox Cathedral. I went in, and smelt a rat. The guidebook confirmed my suspicions – it was all rebuilt in 1975 after the earthquake of 1956 destroyed the Ypapanti Church that originally stood on the site. There are two museums in Fira. In the old Archaeological Museum one is not allowed to take photos, but there are some interesting geometric vases. And then there is a rather splendid Museum of Prehistoric Thera. Here you can see an extremely fine collection of vases and wall paintings from Akrotiri. These are, in fact, only the second best: the best are in the National Museum in Athens, which, sadly, attracts fewer visitors today since the opening of the Acropolis Museum. The site at Akrotiri was closed for many years, following the collapse of the new cover building in 2005, killing a tourist. But it reopened just after Easter 2012, and is definitely worth a visit.

But how old is Thera?

He was immediately slapped down, not least by O G S Crawford, the editor of Antiquity, who published the article with an editorial caveat. But that was Marinatos all over – he had lots of splendid ideas, most of them wrong. (I tend to forgive people with ideas, even if they are wrong!) The trouble is that the eruption can be dated quite precisely from the finds at Akrotiri. These belong to Late Minoan 1A (LM 1A) – a label derived from the dating system developed by Sir Arthur Evans at Knossos and based on the correlation of pottery types. Late Minoan 1B (LM 1B) has the well-known maritime style, and no LM 1B maritime vases are found at Akrotiri. However, the long-established traditional date for the LM 1A/LM 1B interface is 1500 BC, and this is where the problems arise. New scientific dating comes from ice-ring dating in Greenland, where the ice cores show traces of volcanic ash: one at 1623±36 BC, the other at 1644±7 BC. This was then taken up by Mike Baillie in his tree-ring dating. Mike is a palaeoecologist who has devoted his life to tree-ring dating. He noted that there were certain groups of years when the tree rings became very narrow, and he suggested that this was due to some worldwide event that caused a climate disaster. One of these was 1628 BC, which he argued was due to the eruption of Thera.

The trouble is that this causes rather a lot of problems for the traditional chronologies. A whole book has been devoted to the subject, A Test of Time, by Sturt Manning of Reading University (published by Oxbow). This begins splendidly with a good exposition of the problems, but as it goes on, it does get a little bit complicated. A key site is Avaris, or Tel el Dabaa, in Egypt. This lies in the Nile delta, and was the capital of the Hyksos, the invaders from Palestine who seized power in the delta region in the chaos of the Second Intermediate period. The site has been excavated for many years by the Austrian Institute, and, since 1966, under the direction of Manfred Bietak who discovered a palace with Minoan wall paintings. This he dated from Egyptian evidence and from imported Cypriot pottery to 1500 BC, and he has been the primary defender of the traditional late date. For my own part, I prefer to adopt my favourite posture and sit on the fence. However, I do note that the latest radiocarbon dates, including those on grains from the destruction of Akrotiri, favour the early date. The radiocarbon dates appear to be lining up with tree-ring dates, and I get the impression that there is a shuffling of feet by both Minoan and, indeed, Egyptian archaeologists to do the necessary adjustments. So there you are, Martin. I fear I have not really answered your question, but I hope I have given you some idea of the way I think the wind is blowing. Do go out and see Thera for yourself: it is a magical island. Though if you want to go swimming, remember that it is a volcanic island and, as such, does not have the golden, sandy beaches you will find on the marble/metamorphic/sandstone islands of Naxos and Paros.

Andrew Selkirk is Editor in Chief of Current World Archaeology and is writing his History of the World (www.civilization.org.uk).