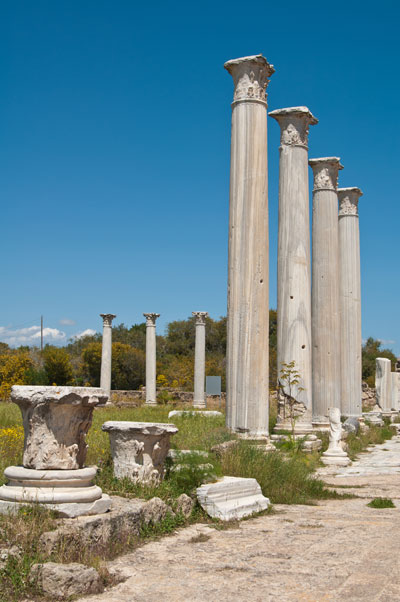 Basking in the eastern Mediterranean sun, Cyprus – legendary birthplace of Aphrodite and Adonis – boasts an astonishing wealth of archaeological treasures, including three UNESCO World Heritage Sites. From its absorption into the Hittite Empire c.1400 BC, this small island has been a melting pot of different cultural influences, passing from the hands of one great power to the next – the Assyrians, the Egyptians, the Persians, later Alexander the Great and his Ptolemaic successors, until it was annexed by another expanding (though not yet imperial) force: Rome, in 58 BC.

As Rome’s fortunes rose, so did those of Cyprus, enjoying relative peace and prosperity for the next 600 years. Roads and buildings sprang up across the island, many of which can still be seen today, from Paphos’ 3rd- to 5th-century mosaics to the ruins of Kourion, with its elegantly restored Greco-Roman theatre and the nearby sanctuary of Apollon Ylatis (‘Apollo of the Woods’).

Some of the most evocatively beautiful sights, however, are at the ancient capital city of Salamis that lies on the east coast of the island near the modern town of Famagusta – known in antiquity as Arsinoe. Salamis was levelled by an earthquake in AD 76, and rebuilt in lavish style by the emperors Trajan and Hadrian. Although by now the capital had moved to Paphos at the opposite end of the island, Salamis nonetheless became a thriving commercial centre. Its eventual decline was precipitated by a series of earthquakes in the 4th century, and sealed by 7th-century Arab raids that drove its inhabitants inland. After its abandonment, the town was buried under drifting sands, protecting much of what remained from being looted for later building projects.

Free to wander among overgrown ruins and tumbled column capitals decorated with winding leaves and flowers, it is clear that the site still has many secrets to uncover. The first excavations took place in the 1880s but there are many areas yet to be investigated beneath the trees and sand dunes. The monuments that have been excavated, however, are spectacular; and while each is carefully labelled, the site is not cluttered with information boards. You can easily meander and form your own impressions. This meditative atmosphere is enhanced by its picturesque position overlooking the sea. Salamis feels cut off from the noise of traffic and modern hubbub – but wherever you are on the site, the murmur of waves forms a constant background to your thoughts.

Roman remains
One of the ancient town’s most striking features is the gymnasium, its dazzling white columns towering against the sky and providing welcome respite from the heat of the sun. Sharp-eyed visitors might notice that these are somewhat mismatched: this is thanks to well-intentioned Byzantines who, after the columns were toppled by an earthquake in the 4th century, patched together the remains with masonry scavenged from all over the site. Its elegant colonnades and porticos could be mistaken for the ruins of a palace or a grand public building. In fact they once marked out a huge exercise yard. The baths that formed part of this complex can still be seen nearby, with plunge pools and hypocausts exposed to view alongside stunning floral, geometric, and mythological mosaics – and public latrines seating up to 44 visitors at a time.

About 100m to the south lies another arresting sight: Salamis’ theatre, built during the reign of Augustus. Just 18 of its original 50 rows of seats remain, though it could once accommodate 15,000 spectators and is still used today for summer concerts. All around the theatre are niches that once housed statues, many of which were later smashed and cast into drains by Christians scandalised by the marble nudes. Most that remain are missing their heads or have had their faces chiselled away – an eerie sight.

Yet these destructive impulses were tempered with creativity, and towards the end of the 4th century, Salamis’ Christian population built immense basilicas among the pagan ruins. St Epiphanios was once the largest building of its kind in Cyprus, stumps of its formerly mighty columns marking out aisles measuring 190ft by 130ft. The remains of hypocausts suggest that its baptistery had underfloor heating, perhaps to make winter submersions less painful. At the far end of the site, another Christian building, the Kambanopetra basilica, has intricate mosaic flooring.

As you leave, it is worth stopping at St Barnabas’ Monastery, opposite the turnoff to the archaeological site. Dedicated to a 1st-century local preacher and companion of the apostle Paul, the monastery now houses a small archaeological museum with an extensive collection of finds from Salamis, as well as pottery from the nearby Bronze Age site at Enkomi.