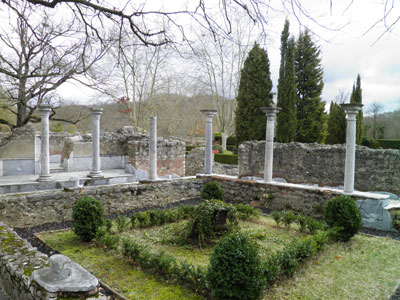 The idyllic setting and picturesque ruins of the Gallo-Roman villa at Montmaurin certainly would have appealed to the Romantics of the late 18th and 19th centuries. Set in a rural landscape against the backdrop of grazing animals and the distant white peaks of the Pyrenees, the ruined walls rise up through overgrown foliage, between trees, and around small gardens. Yet, as was often the case in the 18th and 19th centuries, this was no haphazard arrangement but a carefully stylised scene to create an overall effect that was inviting and peaceful. Today is no different. Furthermore, on both of my visits, I have had the site almost completely to myself, sharing it with only a custodian and two other visitors, and could walk freely around the site at my leisure.

The whole experience is immensely pleasurable, but rather contrary to how it would have felt in Antiquity. All those lovely views of the surrounding countryside afforded by the ruined walls would have been more limited and carefully framed by the architectural superstructure. With more than 200 rooms, the villa would have been a hive of activity.

The visual connection with the countryside today, however, is a reminder of the villa’s primary function: agricultural production, owned and controlled by a member of the local elite. The site at Montmaurin is among the few Roman villas in Western Europe that give a sense not only of their general architectural and decorative plan, but also of their vital connection with the landscape.

The presence of the villa at Montmaurin has never been a secret: it was never totally destroyed – although its walls were robbed, its masonry reused to build houses in the village – nor was it ever covered over. Indeed, it was used as an important marker in the landscape, particularly when it defined the territorial boundaries of the villages of Larroque and Montmaurin.

It is located about 75km (47 miles) south-west of Toulouse, and 25km (15 miles) north of Saint-Bertrand-de-Comminges – both important regional urban centres in the Roman period. The valley in which the villa sits is one of a series created by small rivers that fan out from the Pyrenees and flow into the Garonne. These valleys are rich in alluvial soil, making them ideal for cereal cultivation as well as the raising of animals – specifically goats, sheep, and cows, which today still dominate modern agricultural activity of the area. The river Save is located less than 100m (330ft) from the villa, and would have played a pivotal role not only providing water to the site, but also, when water levels permitted, as a transport route through the valley.

Early excavation
The first excavations of the site were undertaken between 1879 and 1882 by a local priest and magistrate who wanted to uncover more of the site and publish some of the decorative elements from the villa. Explorations of the site continued through the first half of the 20th century, though without any real systematised effort or accompanying publications. Numerous fine marble sculptures and architectural decorations were recovered during this period. Sadly, many were subsequently lost or sold, but some do remain and are on display in the small museum in the village. The site was then systematically excavated from 1947 to 1960, under the direction of Georges Fouet, who uncovered the whole plan of the residential sector or villa urbana.

This is by far the better known part of the site. The agricultural sector, or villa rustica, is only known from a few trenches to the south-west of the residential complex. From these trenches, it was hypothesised that the villa complex was laid out on a rectangular plan, enclosed by circuit walls, with the main residential compound at one end and the outbuildings for agricultural workers and processing along the other; the whole complex was probably surrounded by the fields of the estate. This design is very similar to the ‘courtyard type’ villas found throughout Roman Gaul and Germany in the Imperial period.

The first phase villa urbana, which dates from the mid-1st century to the 3rd century AD, consisted of a series of rooms around a central courtyard, measuring 22m × 25m (72ft × 82ft), and two side wings with further rooms fronted by porticos. Several large rooms were located beyond the central courtyard to the north-east. The residential villa of this phase was substantial, displaying a level of luxury reserved for the elite residents of Aquitania.

In the 4th century AD, the villa was remodelled along the same axis, and greatly embellished. This Late Roman villa contained several new architectural features, including an enormous semi-circular, porticoed entrance courtyard; a temple or shrine building; a large bath complex with nymphaeum; and a suite of raised entertaining rooms in the north-east sector. Structured on a symmetrical basis, this villa contains all the features of the Late Roman villa ‘type’ that have been noted at other sites, such as Piazza Armerina in Sicily, Carranque in central Spain, and neighbouring Valentine in France.

In the 5th century AD, the villa went into decline, and showed signs of a short-lived productive transformation, as was common at villas throughout Italy and the western provinces before final abandonment.