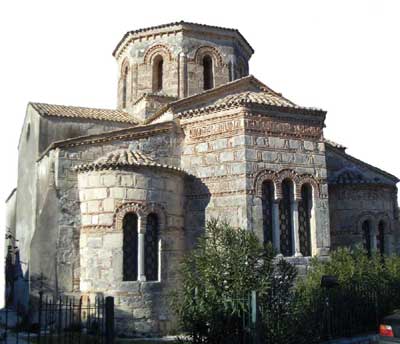 The light is the first thing you notice on arriving at Corfu. It is dazzling and uplifting. Perhaps this is why it has drawn tourists for so long. Now, millions fly into Kapodistra airport, 3km from the main town. Situated off the north-west coast of Greece, the northernmost of the Ionian chain of islands, for nearly three millennia it has been at the centre of Mediterranean history. Most tourists who land at Corfu’s cramped airport miss the fact that they are walking over the remains of a great archaeological site buried well beneath the tarmac. For here – sealed by the dried out Venetian salt-pans – lay the metropolitan sized colony founded by the Corinthians that today is the serene suburb of Corfu known as Palaeopolis.

Corfu remains a lustrous miniature Venice. The Venetians held the island for most of the 12th to 18th centuries, making it a major port for their merchant venturers bound for the Levant. The Venetian imprint abounds: it can be seen most clearly in the architecture of the old town, now a UNESCO World Heritage Site, as well as in the town’s massive eastern fortress, which dates from this turbulent time. The mighty fortifications withstood three Ottoman sieges and thereby halted Turkish designs on Western Europe. Napoleon terminated the Venetian hegemony in 1797, but was soon to lose it to the British, who left their own mark in the form of a Governor’s Palace, a graceful building reminiscent of the age of Jane Austen, dating to 1824 and now the Asian Art Museum. Three kilometres to the south, the Governor’s residence was built at Mon Repos on Kanoni Hill above Palaeopolis, in the very centre of the ruins of ancient Corcyra. The British left in 1864, benignly bequeathing this jewel of an island to the Ionian League, who at once joined the fledgling state of Greece.

It was during the British mandate that the first major traces of the ancient Greek city of Corcyra came to light. First, on Kanoni Hill, the well-preserved Doric temple at Kardiki (c.500 BC) was discovered as workmen prospected for a new water-source for the gardens of the Governor’s residence. Then, shortly afterwards, the discrete Temple of Artemis was discovered on the edge of the reclaimed salterns (clay huts used for early salt production), 300m east of the airport.

The pedimental sculptures, now the centrepiece of the Archaeological Museum (just off Garitsa Bay), from the Artemision immediately generated international interest. Depicting the same scene at each gable end of the temple, these imposing reliefs of c.590-570 BC are among the earliest stone pedimental sculptures known from Greece.

The far more complete west pediment preserves an apotropaic (to ward off evil) running figure of the gorgon Medusa, flanked by her two children, born from the neck of her decapitated torso, Pegasus to her left and Chrysaor to her right. On either side of Medusa and her children is a crouching panther. Of the other anthropomorphic figures on the pediment, only Zeus in the left corner is certainly identifiable (by his thunderbolt), felling a Titan or giant. In the other corner, a seated figure is perhaps either Priam, King of Troy, or Kronos, father of Zeus.

The two temples, rather modest by comparison with temples on the mainland at Delphi or Olympia, hint at the importance of ancient Corfu. Now, with EU funding, the city has injected new life into its ancient past in an attempt to illustrate its significance. The Governor’s residence of Mon Repos has been restored and opened as a museum dedicated to the ruins of ancient Corcyra, while a simple trail leads through the blissful wooded grounds up past the acropolis and the complex of temples dedicated to Apollo and on to the temple of Kardiki. From here, if you peep through the trees, there is a commanding vista down the Ionian seaway. New trails, too, lead the visitor through the maze of backstreets in the modern town to other features of the ancient city’s grandiose topography. Apart from the Temple of Artemis, these include the Byzantine church of Palaeopolis, full of spolia prised from ancient buildings, brazenly sitting directly on top of the Graeco-Roman agora. Other features include a short section of the 5th century BC Greek city wall, which survives to a good height thanks to the fact that it was incorporated into the 11th century church of Panayia Neradziha, and a pair of Roman townhouses situated on the edge of the agora. Traces survive, too, of the north facing frontage of the ancient port. Finally, in the strip of building between the ancient city and the present one, one street back from Garitsa Bay, the new trail invites the visitor to pause at the elegantly circular tomb (c.625-600 BC) of the Locrian Proxenos, Menekrates, who was drowned at sea – one of hundreds of tombs known from the cemeteries largely obliterated by insatiable Venetian and British builders.