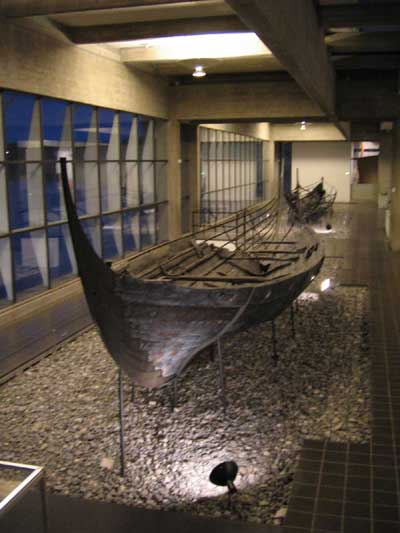 I have always seen Denmark through Klavs Randsborg’s eyes. Randsborg, the Danes’ most distinguished archaeologist, has a passion for the architecture and history of his country and particularly, its capital, Copenhagen.

As I write, Copenhagen is dressed in Christmas vestments. But the affluence of the country is as conspicuous as it ever was; perhaps more so. It is then with some curiosity that we set out for three places that summon up the extraordinary culture of the country in which Ole Worm created a legendary antiquities collection during the Renaissance and made a parish by parish record of all monuments in Denmark and Norway; and where in the early 19th century C J Thomsen invented the now universal Three Age dating system of the Stone, Bronze and Iron Ages.

The range of buildings brought here and reerected is astonishing – from a Faroe Island farm with its little mill powered by a trickle of water, held at a simple sluice, to an immense Jutland manor house. The visionary behind this place seduces the visitor with little ecological tracts from each of the landscapes from which the building has been extracted. So there are Jutland gardens behind the meanly furnished farmhouse from that region and a sense of the affluent rolling ambience surrounding the Zealand watermill.

The museum is free and on this bright morning more than a thousand people are strolling around, exchanging one Danish world for another.

A new part is under construction, too. Beside the village shop from the 1930s (in which the community is line-dancing in a back room), a railway station – appropriately enough – is going to be built. Two very different experiences are melded together here. First, the intelligent conservation and curation of these buildings is a telling illustration of the Danish fascination for buildings and settlements – something pioneers of British archaeology learnt by attending Danish digs in the 1950s. Second, there is no kitsch and the didactic material is discrete. Visitors – almost all Danes – are drawn by the simple beauty of their heritage, skilfully fashioned in this suburban park to feel like the open countryside to appeal to urbanised adults and children alike.

The Mesolithic museum at Søllerød is also designed to appeal to adults and children alike. A punctual bus-ride to the north of the Open Air Museum, Søllerød community opened the museum more than thirty years ago in the stables of the elegant late baroque manor house close to where a cemetery of the 5th millennium BC was discovered in rescue excavations. The exhibition is in two parts.

In the room to the left of the entrance hall is a traditional display of excavated skeletons with their accompanying lithics, as well as cases of flints. To the right of the entrance hall is a passage that traces a winding path through the deciduous woods down to a beach beside an inlet on a fjord where the Mesolithic dead were found. The little journey is essentially designed for children: each section is illustrated with tableaux of stuffed animals and the associated hunting equipment of the age. Beside each case are replica tools and bones for the children to touch as they listen to the medley of woodland sounds. More than twenty thousand people visit this little museum each year, half of them school-children experiencing for the first time the earliest human origins of the woodlands and inlets of prehistoric Copenhagen.

Of all Denmark’s museums – and it has breathtaking examples at Ribe illustrating the Viking town, and Trelleborg beside the Viking fort – the ship museum on the fjord at Roskilde is peerless. As the Vikings under Harald Bluetooth in the later 10th century shaped a nation state modelled upon Anglo-Saxon England and Ottonian Germany, Roskilde was chosen as a capital. A great church was set on the hilltop overlooking the fjord. The cathedral remains the pride of the modern city, an Unesco World Heritage Site, accommodating the graves of Denmark’s monarchs ever since the formidable Harald Bluetooth, even though the capital by 1400 had been transferred to Copenhagen some 30 kms to the east. The comparative architecture of the royal graves is a major tourist attraction, but the city’s status today – as its brochures proudly convey – rests upon an underwater excavation made in the late 50s at the north entrance of the fjord by two young archaeologists – Ole Crumlin-Pedersen and Olaf Olsen – and led to the making of a ship museum beside the water. A sweep of hillslope separates the cathedral from the ship museum, making the church’s outline an imprint on the skyline from any point by the fjord. The city has clearly understood how to connect their foremost assets to engender a spirit of antiquity and place.

The ship museum is built in that brutalist style familiar to many Britons from London’s South Bank (and parts of the University of East Anglia where I teach), but this is a rare case where the architect’s work does not detract from the sublime setting on the shore. Instead, the heavy structure encases a great gallery for the six restored vessels found by the young team almost 50 years ago – illuminated by the serene light reflected from the fjord.

The six ships were deliberately sunk to block the north entrance of the fjord during an 11th-century emergency, leaving Roskilde’s citizens a difficult, little-known, passage out, should that have proved necessary. The boats include an old warship made in Dublin, a North Atlantic trading vessel and a smaller cargo ship. Each is an object of wonderment. Discretely located in the passages are displays including benign reconstructions of Viking daily life, while at the end of the hall are two reconstructed ships intended for children to board and savour maritime life, but a sure-fire magnet to every visitor of all ages. Below ground is a theatre. Here the film made in the early 1960s with its nuanced academic tone has been replaced by an admirable documentary that gives pride of place to the museum’s modern innovation – replica boats that ply the fjord. The replicas are lined up on the grass in front of the museum, each a marvel of engineering. In summertime these ships are launched beside the newly constructed, adjacent visitor centre. (During construction many more Danish seafaring boats were discovered unexpectedly and lend promise to an even greater exhibition in the future.) The new centre occupies an island and comprises a cluster of more discrete modern buildings offering a hint of a maritime village. Here shipwrights work and examples of small skiffs from all over Scandinavia are assembled. There is of course a children’s activity centre as well as a café and administrative offices. No archaeologist can fail to be impressed.

Will each museum survive the expedient tendencies of our new age, as architects and curators vie to distract us with familiar trophy art? I very much hope so. Like the punctual trains of Denmark, for me these archaeological museums conjure up the essence of the country’s long and civilized approach to its past.