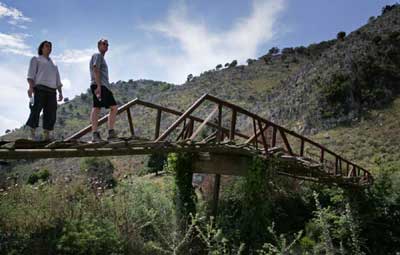 Cape Styllo is a kind of no-man’s land between Greece and Albania. The bustle of Corfu has always seemed so much more palpable as one looks across the crystalline waters of the Straits of Corfu to this rocky Balkan corner. No contrast could be greater.

Cape Styllo is today at the most south-western point of Albania, a wild, treeless massif of denuded knolls. After the Greek army took this area in 1913 it was assumed that all of southern Albania would be ceded to Greece at the Treaty of London. Earl Grey, the chairman of the Great Powers, went so far as to propose this. The Italians reacted angrily. Under no circumstances could Greece control both sides of the Straits of Corfu. If this happened, so the Italian delegation informed Grey, Italy would bomb Vlora (the Albanian capital) and Saranda (then the Greek minority capital)! Grey found a compromise. Cape Styllo along with Korca (in southeastern Albania) would become Albanian while Greece would gain some Aegean islands in their stead. After six months of wrangling, Grey got his way and Cape Styllo is one of the two places named in the making of Albania in August 1913.

Currently, Cape Styllo is deserted, though a 1940 track running like a scar diagonally from the extraordinary ‘bridge of death’ over the Pavlass River, constructed for advancing Italian tanks, now serves smugglers. Before 1997 a daily convoy of mules would take Albanian milk up the track to some spot near Sagiada where, for pennies, it gained fraudulent EU sanction. Fish, too, from time to time doubtless were carted in panniers this way, as was less wholesome merchandise.

The proximity of this block of unspoilt land to Butrint has always fascinated me. Its very wildness adds an extra arc of mystery to the Graeco-Roman World Heritage Site. Protecting Cape Styllo has always been important for the Butrint Foundation [of which Hodges is the Scientific Director]. When Prime Minister Fatos Nano wanted ‘to conserve it’ with 42 gated villas in 2003, the Foundation used every ploy to prevent him succeeding. This threat also encouraged us to try to understand the promontory better.

So, emboldened by necessity, a team set out over ‘the bridge of death’, an amazing contraption of rusting old tubes and unthreading wires with split planks and rope, and climbed into the hills beyond.

On a rocky outcrop with a blissful view high up, known as Shën Koll, a spread of Late Bronze Age sherds was found close to an intriguing if incomplete enclosure. The surrounding land falls off steeply to the north, and the high point of the site commands spectacular views over the south-eastern valley approach, and has vistas to Butrint and almost the whole of the eastern side of the island of Corfu.

In June 2006 we returned with a team to survey Shën Koll. Leaving shortly after dawn, we all inched our way warily over the bridge, while Mondi – one of our workmen from the local village of Vrina – rode through the swift waters of the Pavlass on his mule laden with our equipment and stores. Then we hiked for an hour, winding our way through the scrub past dogs, their backs arched in anger, guarding flocks. The walk, my companions told me, was never dull because the view at the end was simply ethereal. And so it was this late spring day.

‘Corfu lies like a sickle beside the flanks of the mainland’, Lawrence Durrell reminds us in The Greek Islands (1978), ‘forming a great calm bay, which narrows at both ends so that the tides are squeezed and calmed as they pass it.’ From this extraordinary setting, it is perfectly clear that Butrint commands the sea-routes up the Adriatic Sea to Venice, across to Sicily and Spain, and south through the Ionian islands to the Aegean.

On this day, the abandoned ancient and medieval port was located on a sparkling finger of water.

Ilir Gjipali is the director of this project. Being based in Tirana, he takes every opportunity to stride into the wilds of south Albania seeking out prehistoric sites. With him is Dave Bescoby from Norwich, responsible for the surveying, Sarah Lima from Cincinnati, and two young graduate students from Tirana – Rovenna Curta and Rudenc Ruka.

They have found indistinct traces of an enclosure which covers much of the hilltop, an elongated area measuring some c.160 x 95m. In areas where the wall is absent, elements of natural rock formations were incorporated into the fabric of the enclosure. Elsewhere piles and spreads of tumbled stones from the wall are evident on the downslopes. Several sections of wall survive to a height of between 0.80-1.50m. Among the apparently later sections are curved elements which may potentially have been parts of internal structures.

Over the course of three weeks, this little team dug test trenches in the interior at selected intervals adjacent to its southern wall and a further trench dug on the hilltop beside the only real tree hereabouts. One trench too was sited within a potential structure and a second in proximity to a possible gate. Each trench revealed thin deposits of rendzina soils overlying bedrock. The Late Bronze age potsherds occurred in concentrations at various depths and no stratified deposits unfortunately could be identified.

Along with two ceramic beads and a flint hammerstone, the excavations produced several thousand potsherds. Some of these proved diagnostic and serve to confirm the Bronze and early Iron Age date of the site indicated by the collection made in 2003. A fabric study on the nondiagnostic material revealed five principal types.

These include local handmade coarsewares, some resembling examples from the 1990s excavations made by Kati Hadzis on the Acropolis of Butrint.

Ilir Gjipali was fairly certain that the enclosure initially served a pastoral community perhaps temporarily protecting their herds. Similar sites exist further north along the Albanian coast in the Himara region where enclosures have been associated with the fortifications of pastoral communities. Yet digging here – with the mesmerizing flow of a hundred or more ferries passing by like toys every day – the site’s elevation and prominence in the landscape, particularly its visualcontact with Corfu, Butrint and the waters in between, means that an interpretation of this place as a refuge, watch station or signalling point cannot be ruled out. Indeed, the relationship and interactions of Shën Koll with Bronze Age Butrint and Corfu certainly call out to be explored.

Mondi took me back to the ‘bridge of death’ by another route. I followed the mule who was now moving more freely having left the kit behind. The narrow path cut its way down to the edge of the Pavlass where a branch of the river needed to be traversed. My companion ordered me onto his bony pack-creature, its wooden saddle cutting into my fleshy thighs. Then he leapt onto the mule’s haunches and urged the poor animal forwards into the water. The creature moved onwards with ungainly purpose, bisecting a beam of dancing sunlight that had penetrated the low canopy of trees. Then it struggled onto the far bank and the little adventure was almost over. I nervously retraced my way over the ‘bridge of death’ and a mile onwards my colleague Oliver Gilkes, from the Institute of World Archaeology at the University of East Anglia, picked me up to return me to the placid comforts of the excavations inside Butrint.

When I told Oliver about crossing the Pavlass on the mule, he exclaimed in envious admiration.

Our forebears until the road was made to Butrint for Nikita Khruschchev’s visit in 1959 all arrived here on mules or by boat and all, as a result, appreciated how sublimely remote this angle of Albania was.

Today only Cape Styllo retains that remoteness. It is a discrete seamark that offers a hint of the wild beauty of Albania’s unspoilt places.