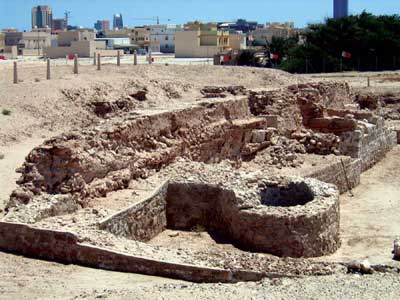 Celebrating the Garden of Eden Last month, CWA joined a host of international archaeologists on Bahrain in the Arabian Gulf, to celebrate the 50th anniversary of archaeological excavations on the island. This provided an opportunity for us to witness some of Bahrain’s key ancient sites and to hear of future plans and concerns.

Bahrain is for the most part a dusty white landscape out of which rise scores of new unimaginative building developments, surrounded by cerulean seas, and all slowly baked by the sun. It is a small island, just 665km sq, and prior to recent massive building work, its most significant feature was the numerous enigmatic burial mounds: in the 1950s, there were an estimated 100,000.

Built of local compacted stone and coral, the burial mounds rise sandy white out of the ground to heights of about 1.5m, though about twenty ‘royal’ mounds are major affairs, towering up to 12m high. Owing to the copious mounds, ancient Bahrain was thought to have operated chiefly, if not exclusively, as one huge cemetery for the surrounding Gulf lands.

However, the Danish archaeologist Professor P. V. Glob, decided to investigate whether this was an accurate judgement. He discovered that the island was not just a necropolis, but that it had been heavily populated for millennia. Moreover, he soon became convinced that Bahrain was in fact the ancient land of Dilmun, the likely inspiration for the Bible’s story of the Garden of Eden.

The bountiful and blessed land of Dilmun is known from the Mesopotamian texts. They describe it in terms of a great civilisation that lay on the trade route between the civilisations of Mesopotamia and the Indus Valley in Pakistan at around 2000 BC.

One of the key sites to support the Dilmun-Bahrain connection is that of the Barbar temple, discovered by Glob in 1954. Excavations by the Danes revealed the remains of three limestone temples, each built atop the previous one over the course of a millennium: the first was built around 2,500 BC, while the second more elaborate version was constructed around 2200 BC, and the third temple was built in the early 2nd millennium.

The temple was built upon a water spring, above which the ancients built the basin of a well surrounded by stone walls and approached by a staircase from the upper structure of the temple. This area is thought to have been a sacred place for ablution or washing for the worshippers. Moreover the location of the temple fits with the beliefs that Enki, one of the gods to whom the temple seems to have been dedicated, lived in a watery subterranean abode. The Mesopotamian god Enki was also the god of wisdom and freshwater, holding magical purifying powers of water.

The temple also appears to have been built in honour of Enki’s wife, Ninkhursag. The famous epic of paradise, apparently adopted by the Bible, revolves around Enki and Ninkhursag.

A second important site that adds fuel to the Dilmun-Bahrain connection is that of Qalat al-Bahrain, the island’s erstwhile capital. Complete with major harbour and numerous industrial areas, it was occupied for a massive period – between the early 3rd millennium BC until around AD 1400. Within the site, the excavators have uncovered good evidence – including cylinder and stamp seals – for ancient trading connections with Mesopotamia and Pakistan.

In addition, simpler Dilmun settlement sites have also been uncovered on Bahrain, including the 2nd millennium BC village of Sar. Sar seems to have been an extremely well-organised settlement. Thus, almost all of its known houses comprise two to three rooms, all built according to the same repetitive L-shaped plan, and all built of limestone slabs. The settlement is neatly divided by surprisingly wide roads, and towards the centre of the settlement is a temple, with two altars still in situ. While to the east of the town is an intriguing burial complex that covers around 100m by 60m, and packed with graves interwoven in a recurring honeycomb pattern.

However, a major modern highway cuts across the cemetery. This draws attention to the swift rates of development on the island, and the associated destruction of its archaeology. Indeed, local archaeologist, Abdul-Wahab Al-Khaja spoke passionately of the need to implement methods of protecting Bahrain’s heritage from excessive development, potentially through the proper development of archaeological tourism.

Action must be taken soon: it was obvious from our visit to the Barbar temple that it has been falling into a certain degree of disrepair since excavations were completed, and the site has been left open to the elements. Moreover, since 1950, around 75,000 of the burial mounds have been destroyed.

Land is at a premium on Bahrain and prices have been soaring since the island, being depleted of oil, turned its attentions to becoming the banking capital of Arabia, and a holiday hot-spot for those in search of sun and sea. Clearly, the Garden of Eden risks falling to new temptations.