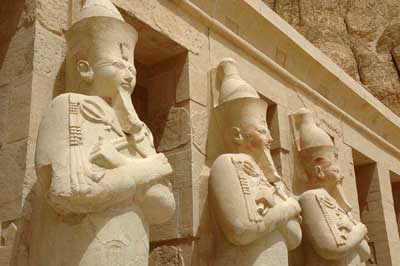 Hassle, headaches and horror, or a new luxury at Luxor? How does travelling in Egypt today compare to the experience of some 30 years ago? Egyptologist Bob Partridge reflects.

It is just over 30 years since my first visit to Egypt in 1978, so 2008 saw my Heb-Sed (Egyptian Pharaohs celebrated their Heb-Sed festival when they reigned for 30 years) and I celebrated it with a trip to the Oases of the Western Desert. This is the second time I have made this trip, which ended with a splendid day in Luxor.

I was travelling with a small group of friends and the conversations over meals, mint teas, Egyptian beers and shisha pipes often turned to memories of earlier visits (I have lost count, but it is well over 50 now). I am often asked how much Egypt has changed for the visitor in the time span I have been visiting; the assumption, I think, is always that it must have been so much ‘better’ in the past. On reflection, however, I am not necessarily sure that is actually the case – although it is more than usual to view one’s own past through slightly rose-tinted spectacles.

Using Luxor as an example, it is true that the town has changed and grown remarkably over the last 30 years, but the same can be said of my home town in Cheshire and any number of towns and cities around the world. While all the changes in Luxor may not be to everyone’s liking, towns and cities have to change, adapt and grow to meet the needs of their residents. Modern towns need good sewage systems, new roads, car parking, and facilities and perhaps Luxor has simply been a little slow in catching up with the modern world. Understandably, this may be seen as a negative aspect to visitors; but the idea of visiting anywhere, frozen in time, and not necessarily a good point in time from the resident’s point of view, is a little blinkered.

So what is different? Well, in 1978 there were far fewer tourists, hotels and facilities. Meals in hotels had sometimes to be regarded as ‘fuel intakes’ rather than pleasant culinary experiences. I remember my first pizza in Egypt; it was, effectively, little more than cheese on toast, but it was served by a smiling Egyptian waiter, who had learnt the word ‘ciao’… It was not long before real pizzas were being served in hotels that were keen to adapt and improve their hospitality towards visitors from other countries.
Egypt was still not an easy or a cheap place to visit; most tourists tended to be seasoned travellers or retired people – those lucky enough to be able to afford the trip, which, from recollection, cost me around £350. In hindsight, this is a remarkable amount, for it is possible today to buy holidays in Egypt for less than that 30 years on!

Egypt was then a quiet place, with far less hassle from shopkeepers and souvenir-sellers, a fact brought home to me recently in the Western Desert at Siwa Oasis, where visitors are still treated with polite curiosity, friendly waves and smiles. This is very much like my first memories of Egypt, and where the shopping and souvenir-hunting is pleasant and relatively hassle-free.

Some aspects of Egypt have perhaps become too commercial. In places like Luxor it is impossible to enjoy an uninterrupted walk along the river, without having to fend off a variety of people offering (very politely and always with a smile) felucca rides, taxis, guided tours, or trying to encourage one to enter their shops. The ‘shopping experience’ is not what it used to be with most shops now selling ‘souvenirs’ made in China, seemingly imported by the container-load, and which I can actually buy in the UK. I long for a time when the shops sell good Egyptian made souvenirs and replicas of antiquities.

But what of the reason I first visited Egypt and the factor which keeps pulling me back year after year – the antiquities? Here I have to say the change is quite remarkable, and perhaps not necessarily always evident to visitors today, who may assume that things in this respect have always been the same.

Thanks to the work of the Egyptian Supreme Council of Antiquities, and Egyptian and foreign missions working at the sites, there have been some significant changes, undoubtedly for the better.

Impressive as the monuments were 30 years ago, many of them appeared (in retrospect) to be somewhat neglected and run-down. More tourists have generated extra income and an interest in preserving the sites, in improving tourist access and providing information about them.

To illustrate such changes: on the West Bank of the Nile at Luxor, the Ramesseum and the temple of Medinet Habu have seen extensive restoration, conservation and cleaning; the temple of Amenhotep III is being excavated and parts are being reconstructed; the temple of Merenptah and its new museum were just a mound of rubble in 1978; and Hatshepsut’s temple is dramatically different, with the major and impressive restoration of the upper terrace, which was simply just not there on my first visit.

A few more tombs on the West Bank are now open to the public, their walls are protected by glass screens and they are properly lit. I can remember when the only light in the tomb of Sennedjem was a single 30-watt light bulb on a very long cable, which the custodian took down into the tomb every time someone visited. It may have been a more interesting experience, but not necessarily the best way to see the tomb.

On the East Bank, the temples of Luxor and Karnak are now far more accessible and protected from salt damage thanks to the very successful recent de-watering projects. Many parts of the temples have been cleaned and conserved. Also in Luxor (and indeed elsewhere in Egypt) there are new museums: the extended Luxor Museum and the nearby Mummification Museum.

I could list similar stories for other sites all over Egypt. The antiquities are now far better protected and conserved, and with various new plans will continue to be preserved for visitors in the immediate and, more importantly, the longer-term future.

The trouble with tourists

Increased tourist numbers have presented major problems at many sites, hence the need to allow better access for coaches, for parking and just even moving around the monuments. This problem is particularly apparent at places such as the Valley of the Kings, where tourists’ coaches park some way away from the valley and where a new Visitor Centre gives some background to the site before electric trains take visitors to the valley proper. In the tombs, where space is restricted, no guiding is now allowed in them and numbers are sometimes limited and controlled at busy times.

One solution to the over-crowding of tombs is currently being addressed and a specialist Spanish company is laser scanning the tombs of Seti I, Tutankhamun, and, I believe, Nefertari, as a first step to making exact replicas of the tombs. This has already been done for the tomb of Thutmose III, and an exact replica of the burial chamber has been on tour around the world. Having seen it in Edinburgh, it really is excellent and every bit as good as the real thing. The idea will be for most visitors to visit replicas with the real tombs open (presumably at a higher entrance fee) to a limited number of people.

It was still recently a struggle to get across the Hypostyle Hall in the temple of Karnak a few weeks ago because of the dense crowds of people there (I think my visit coincided with that of the Red Sea day-trippers) but the sites are large and if you have the time and patience, it is still possible to visit them when they are not too overcrowded.

As for things I would like to see change/improve in the future? It is a little sad to see the growth of modern houses on the West Bank of the Nile at Luxor, where once there were just the Theban Mountains and waving palm trees, but people do have to live and work there. I would definitely like to see the river boats moved from in front of Luxor Temple and the Winter Palace area, where they block what is (and could be) still a remarkable and unique view, and pollute the air with diesel fumes and the constant roar of their engines. This move is planned, but I understand it may be a few years before the new facilities are available for the boats further upstream.

The clearance of houses on the West bank from above the tombs has caused some controversy, but damage was being caused to the tombs beneath houses and work there in the last few months has already revealed some important tombs thought to be ‘lost’ for decades or more.

The new large open spaces around Luxor temple, and Karnak in particular, are not to everyone’s liking, and involved the demolition of houses and the removal of many people living and working there. The main reason for this is to protect the monuments, to define the boundaries, where possible, of archaeological sites and to avoid future encroachment. Too many people and crops (especially sugar cane) near the temples introduce water to the area, which in the past has caused severe and, sometimes, permanent damage to the monuments.

The future of Egypt’s past

Changes like this will continue, both to protect the monuments and to enable them to cope with ever-increasing numbers of tourists. I understand plans are under consideration to remove the buildings in front of the Temple of Medinet Habu. I can already hear the howls of protest, but a friend in Luxor reminded me that just 30 years ago the front of the temple was completely clear of buildings and could be seen from the river. Moving buildings and gardens (and inevitably people) is in some cases essential for the long term preservation of the monuments. In the case of Medinet Habu it would be effectively turning the clock back 30 years.

The Egyptian Supreme Council of Antiquities is doing an excellent job in looking after the monuments, but it is not always easy if the needs of the monuments conflict with the requirements of the modern population of Egypt. Change is inevitable, but hopefully it will be for the better as the Egyptian authorities try to manage the difficult balancing act of the needs and hopes of the local inhabitants, the needs of tourists, and the protection of and access to the antiquities, which, after all, is what people visit Egypt to see.

I know Egypt will continue to fascinate me and attract me back, as it does many people. I learnt on my first trip that the Egyptian people are among the friendliest in the world, and over the years I have made many good friends around the country and I look forward to that continuing. It is always a new experience to visit the familiar sites and see the changes and improvements being made. This means there is often genuinely something new to see – a good reason for making a return trip to Egypt. Long may this continue.