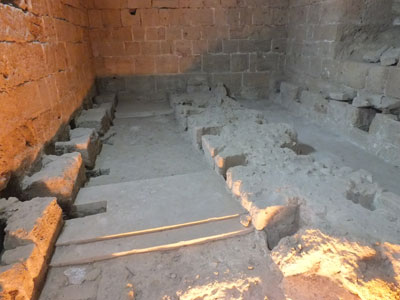 To most of us, lavatories are ‘yuck’, but to archaeologists they can be gold – especially if you can get a research grant to study their contents. Biological anthropologist Dr Piers Mitchell of Cambridge University has been doing just that, having a good dig around in the 900-year-old ‘soil’ from a crusader latrine.

This grand 35-seat affair was constructed as one of the 13th-century mod cons at the headquarters of the Knights Hospitallers of the Order of St John of Jerusalem in the city of Acre. Specifically, Dr Mitchell is looking for the microscopic eggs of different types of intestinal parasite as part of his wider study of the spread of disease during the Medieval period.

People from Europe, Africa, and Asia were brought together in some numbers for the first time in several centuries, when hundreds of thousands of Europeans travelled to the eastern Mediterranean in the 12th and 13th centuries as pilgrims, traders, and crusaders. This long-distance travel has been blamed for bringing the plague to Europe. It is quite possible that syphilis also originated in the east, as well as many of the skin conditions that Medieval physicians lumped together as the Biblical ‘leprosy’.

But the spread of disease was not in one direction only. Among the eggs found in the crusader latrines are those of fish tapeworm, which is native to Scandinavia, western Russia, and the Baltics. Dr Mitchell’s study shows that the parasite was not in Asia before the crusades, but spread southwards and eastwards in salted, smoked, or dried fish, and ‘is a great example of how migrations in the past can move diseases around the planet’.

Dr Mitchell now plans to extend his research even further back in time: he is looking for human faeces across the Fertile Crescent, from Jordan to Iran, to see what impact the change from hunter-gatherer lifestyles to urban and agricultural settlements had on human health.

One wonders what the reaction is at dinner parties when, in reply to questions about his work, he says ‘I am trying to find out when intestinal parasites first become common in humans and what impact the invention of the communal toilet had on public health’.

Just as some rock stars insist on private facilities for their own exclusive use in return for appearing at such festivals as Glastonbury, where the state of the loos is often far from ideal, so the key to the executive toilet is one of the enduring symbols of power and status, along with the ceremonial robes, the chauffeur-driven transport, the deference, and the titles. It has ever been thus, as MOLA, the London-based archaeological unit, has found out while excavating part of the Medieval Guildhall in the City of London.

Their investigations have led to the discovery of a Medieval toilet in the Phene Neal Room (named after Sir Phene Neal, Lord Mayor in 1930-1931), where Lord Mayors would once don their ceremonial clothes before entering the grand public hall. The removal of the modern concrete floor has revealed the original vaulted drain and cesspit. It appears that the garderobe was built in the early 1400s, during John Croxtone’s renovations of the Guildhall. Since Dick (Richard) Whittington was Lord Mayor of London on no less than four separate occasions between 1397 and 1420, it is almost certain that he would have used it.

Medieval toilets were also used for storing clothes in the belief that the ammonia from the urine in the cesspit would kill or deter lice and fleas. That is why the Medieval word for toilet was ‘garderobe’. It turns out that the American term ‘cloakroom’ is not just a euphemism for lavatory, but is a faint echo of that Medieval belief.

If you were an American soldier serving in the Second World War and your duties took you to the ruins of Hitler’s Berghof residence, set high in the Bavarian Alps, where Hitler entertained some of the Reich’s most notorious war criminals, what would you consider slipping into your knapsack as a memento? If we are to believe Michael Borch, his father chose to ‘liberate’ Hitler’s lavatory seat and send it back home to the USA in the ordinary post. Borch recently publicised his father’s deed because ‘I think it’s time the story of the toilet should be told’.

Tabloid journalists not only enjoyed reporting this story under such punning headlines as ‘The turd Reich… toilet looted from Hitler’s lair’, they also revealed the existence of two more seats once used by Hitler. Another apparently came from the dictator’s private yacht, the Aviso Grille, and is now installed at a car-repair garage in Florence, New Jersey, where people come to take pictures and even sit upon it.

A third was put up for sale in 1969 by Guy Harris, a retired RAF wing commander, who said he removed it from the German leader’s private apartment in the chancellery bunker in Berlin, where Hitler and Eva Braun committed suicide shortly before the city was taken by Russian troops in 1945.

Harris said that the Russians had stripped the apartment of all other souvenirs, including the panelling on the walls. The mahogany seat was all that was left. He installed the seat in his Thames yacht then moved it to his Twickenham home, commissioning a metal plate inscribed with an account of the seat’s history.

Where there are toilets, can graffiti ever be far way? The British Museum exhibition Life and Death in Pompeii and Herculaneum has some prime examples, and reveals that the desire to leave a mark on the walls is one of the oldest forms of human expression. Some of these ancient scribbles are designed to warn fellow visitors what to expect by way of hospitality in the city – a sort of ancient Roman TripAdvisor: Viator Pompeis Panem Gustas Nuceriae Bibes, says one example (‘Traveller: eat bread in Pompeii but drink in Nuceria’ – today’s Nocera, on the inland side of Vesuvius).

In the same vein, another graffito warned that the landlord was a drunkard who over-diluted his wine: ‘he drinks the wine and serves water to his customers’, it says. In another bar, graffiti suggest that the staff might be available for sexual encounters: ‘Acria sold herself for 4 asses’, says one scrawl while Prima Donna (‘First Lady’), despite her name, could only command 1.5 asses. To get an idea of what these figures meant, the price list in a third Pompeiian bar said ‘good wine at 1 ass, better for 2 and Falernian [the best] for 4 asses’.

Toilet scrawls record the names of people who have made use of the facilities, including one servant whose name – Martha – suggests she might have been a member of Pompeii’s Jewish community, while another graffito in the well-appointed latrine of the House of the Gem records that Apollinaris Medicus Titus Imp Hic Cacavit Bene (‘Apollinaris, Doctor to Emperor Titus, had a good s**t here’). As a medical man, he no doubt appreciated the health benefits of regular and unforced bowel movements.

Elsewhere there is evidence that using the latrine was considered to be fraught with potential danger: a fresco from yet another Pompeiian tavern shows the goddess Fortuna standing guard over a squatting figure and the words Cacator Cave Malu[m] (‘S**tter beware the evil eye’), suggesting that whatever malign forces were out to get you, they will probably attack when you are at your most vulnerable.

Some graffiti record the completion of work tasks: Balneus Lavatur, says one (‘Bath cleaned’), and Exem[p]ta Stercora A[ssibus] XI says another (‘S**t from cesspit emptied for 11 asses’), while a third says ‘house gone through’, which is taken to be a sign that someone had salvaged (or looted) the house contents. For it is a myth that Pompeii remained untouched after the eruption: people returned to sift through the volcanic debris from Vesuvius once it had cooled, and anything portable and valuable was taken.

Frescoes, however, remained in situ, and the city’s most endearing example of ancient graffiti consists of a series of animals, probably made by children, gouged with a sharp point into the painted plaster in the House of the Cryptoporticus. Anyone whose child has ever used the walls of the house as a canvas for their juvenile artistic experiments can imagine what the parents must have felt when they discovered what their offspring had done to the new and expensive fresco in the best guest dining-room.