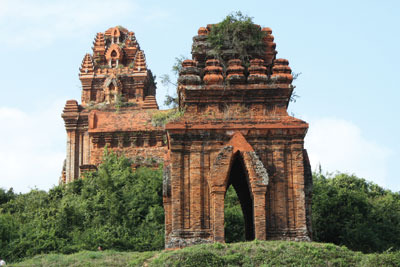 Older readers will recall the television career of Sir Mortimer Wheeler, and his enormous impact on budding young archaeologists through the programme Animal, Vegetable, Mineral? Chaired by Glyn Daniel, it involved three panellists being challenged by a museum through the middleman and fixer David Attenborough to identity a range of objects from its collections. It was hugely popular, and Sir Mortimer, the undoubted star, was voted TV personality of the year in 1954, with Glyn receiving the same accolade a year later. Sir Mortimer was also chairman of Swan Hellenic Cruises, and his lectures, both on board and on site, are legendary. He once stood before the Lion Gate at Mycenae and intoned: ‘Out of that gate marched Agamemnon to the siege of Troy.’

I am now lucky enough to be a regular guest speaker with the same company, and recently returned from a cruise from Hong Kong to Singapore, calling at ports in Vietnam, Cambodia, and Thailand. There is nothing quite like the first gin and tonic of the day in the Wheeler Bar, its walls adorned with images of the great man, after a day visiting archaeological sites.

Archaeologically, the cruise was very special, as we were able to visit several sites of one of the most mysterious and least known civilisations of Southeast Asia, the Chams. For centuries, the Chams were rivals of Angkor. A naval battle between their respective forces is depicted on the walls of the Bayon temple. Yet, while tourists threaten to overwhelm Angkor, few are to be seen at the great Cham centre of My Son.

We drove there from our anchorage at Da Nang, near China Beach where the French landed in 1858 to take possession of Vietnam, and where the Americans followed a century later. My Son is a concentration of brick sanctuaries, dedicated by a succession of kings over a period of at least ten centuries, beginning in the 4th century AD. These temples were for the worship of the Hindu gods Siva, Visnu, and Brahma, linked to the name of the ruling sovereign. In its heyday, My Son was serene and beautiful, bordering on the spectacular. Excavations began in 1903-1904 under the direction of Henri Parmentier, and many of the fine Cham sculptures were taken to the museum in Da Nang that, until 1963, bore his name.

Even today, there are still some fine reliefs. One in particular that caught my eye was of a group of musicians and dancers engaged in a lively performance. In 1999, the cultural significance of My Son was finally recognised when it became a World Heritage Site. Sadly, today one cannot visit without confronting one of the worst cultural disasters of the Vietnamese war: a landscape littered with bombs, the result of American air strikes that reduced some of the temples to rubble, and badly damaged others.

From Da Nang, we sailed south to Qui Nhon, to visit the Cham temples of Banh It. These are superbly located on the summit of a hill, commanding views of the coastal plain that stretches west to the foothills of the Truong Son cordillera. The rice fields give the impression of an endless carpet of emerald green, for here the constant supply of river water is diverted to irrigate the rice even during the height of the dry season. The sanctuaries date to the 11th century, and again the fine statues have been removed, most to the Cham Museum in Da Nang, but naturally the finest to France and the collections in the Musée Guimet.

The temples of Po Nagar lie in the centre of the port city of Nha Trang. This was the centre of the Cham state of Kauthara, and an inscription records that King Satyavarman restored the temples in AD 781 after their destruction by ‘men living on food more horrible than cadavers, frightful, completely black and gaunt, dreadful and evil as death’. The temple towers have been considerably restored, and, unlike the other two sites, are centres of worship, music, and dance to this day. I even saw a Cham there.

But who were the Chams? Their descendants still speak an Austronesian language most closely akin to that spoken in Borneo. Their civilisation follows directly from the Iron Age Sa Huynh culture, which flourished along the coast of Central Vietnam from at least 500 BC. These people interred their dead in large, lidded urns together with iron tools and weapons, and a fine range of glass, agate, and carnelian ornaments – most prominent of which is an earring in the form of a double-horned animal known as a saola. These incredibly rare bovids were only discovered in the remote forests of Vietnam in 1992. Most specialists maintain that the Sa Huynh people came to Vietnam from Borneo, and prospered there through rice cultivation and an extensive maritime trade network. It was they who were to enter history as the Chams.

Though the Chams were vulnerable to piratical attacks from the sea, their nemesis came by land from the north. Freed of Chinese domination in the 9th century AD, the land-hungry Vietnamese began expanding to the south, lopping off individual Cham statelets as they progressed. The final blow came as recently as 1832, when the Vietnamese Emperor Minh Mang destroyed their last bastion, the kingdom of Panduranga. The Chams, once the proud contemporaries of Angkor, are now a byline in the history of Vietnam.

Our cruise involved five guest speakers, and, to my surprise, I found that one was not only a Rear Admiral, but also a fellow archaeologist. John Lippiett is the chief executive of the Mary Rose Trust. One evening, he held us spellbound with his description of Henry VIII’s flagship sailing out from Portsmouth on 19 July 1545 to engage with the French fleet, and sinking with virtually all hands when a freak wind turned the ship sideways, and water poured through the open gun ports.

I was invited, some years ago, behind the scenes at the Mary Rose headquarters to see the English longbows, wooden platters still with knife-marks on them, and everyday items such as nit combs and shoes. But John delved still deeper into the excavation of this most famous of English wreck sites, describing the contents of the surgeon’s chest, the golden coins, and the human remains. All the excavations and the delicate work of conservation, not to mention the cost of conserving and displaying the ship herself, is undertaken without a single penny from the British Government. So, if you are ever in or near Portsmouth, don’t miss the newly opened Mary Rose Museum; visit the website www.maryrose.org and become a friend!

Another of our guest speakers, Michael Saunders, described the sad end of two great British warships, the battleship Prince of Wales and the battle-cruiser Repulse, both sent to the Far East by Winston Churchill to stem the advance of the Japanese into Malaya and Singapore. On the fateful 10 December 1941, they were identified by the Japanese airforce, and both were sunk in shallow waters.

Our captain agreed to divert to the spot where they went down, and there we stopped for a most moving memorial service conducted by another guest speaker, Richard Harries, the former Bishop of Oxford. We all sang ‘Eternal Father, strong to save’, and scattered flowers on the calm waters. It was as we lay, stationary and silent, that we noticed a most remarkable sight: oil still leaking from the Prince of Wales covered the sea – we could even smell it, 71 years after she was sunk.