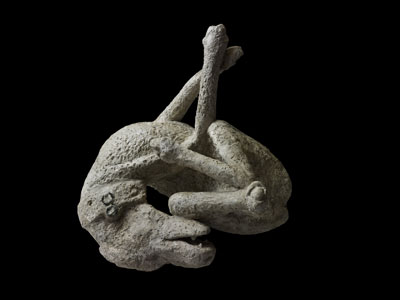 What was life like in Roman Empire? The new exhibition at the British Museum will give visitors a unique opportunity to find out. Curator Paul Roberts explains his ambitious project to recreate a typical 1st century AD house and garden, bringing a slice of Pompeii and Herculaneum to London.

When it came, the destruction of Pompeii and its smaller sister Herculaneum was rapid and final. As result, these two very different towns of the 1st century AD, one inland and one on the coast, afford us the unique opportunity to study the lives of ordinary people in intimate detail.

Apart from the spectacular manner of their final moments, both Pompeii and Herculaneum were typical of their day. And, because they were entombed by volcanic ash and pyroclastic flows, their public buildings, shops, and private homes were preserved along with much of their decoration and contents –and even some of their inhabitants – giving us a vivid picture of life in the 1st century AD during the Roman Empire.

The British Museum is presenting an exhibition on Pompeii and Herculaneum, the first in its history. But what makes this particularly exciting is that, unlike previous exhibitions that have shown life in the city as a whole, this focuses on the daily lives of ordinary Romans through that most universal context, the home. The house in the exhibition is a wealthy one, but such homes contained elements of all social classes from the master and his family to the slaves, ex-slaves, and relatives. It is therefore an ideal vehicle to explore wider cultural and social themes, such as the role of women, slaves, and former slaves; the importance of commerce; and the presence of Greek cultural influence.

When Vesuvius erupted in AD 79, it buried great swathes of the region around the Bay of Naples beneath volcanic ash, and pyroclastic flows – avalanches of superheated gas and debris. Pompeii and Herculaneum remained entombed until their discovery in the 18th century. Although early excavation was not carried out to the standards we expect today, undoubtedly resulting in lost information, modern technology and new methods of research are putting together a composite picture of how citizens, freed men and women, and slaves lived, worked, and died in the Roman state during the 1st century AD.

Pompeii and Herculaneum are often linked together, yet they are two very different towns. Pompeii was the commercial and industrial heart of the region, with a population of up to about 15,000; Herculaneum, on the coast, had a population of 4,000-5,000. The manner of their destruction was different, too. Because of the way the wind was blowing, Pompeii was the first to suffer. A tall eruptive column rose nearly 30km (20 miles) into the air. At the top, the pumice (lapilli) was blown south-east, blotting out the sun and raining down over Pompeii to such an extent that in places the town was buried nearly 3m (9ft) deep.

Roofs collapsed under the weight, and streets became blocked, impeding escape. Herculaneum, much closer to the volcano but to the west, was untouched by this phase of the eruption. However, when the column collapsed, great clouds of hot gases mixed with ash plummeted down the side of the mountain with devastating force, destroying everything in their path and submerging the town.

No living thing could survive the intense heat, about 400-500°C, which instantly carbonised –thereby preserving – wood and other organic material. The town was buried beneath about 24m (80ft) of fine dust, which pervaded even the tiniest of spaces and then set solid.

Pompeii’s ordeal continued. Further surges, probably carrying toxic gases and at temperatures as high as 100-400° C, swept across the town, destroying those parts of buildings not already submerged by the pumice, and covering it with further layers of ash up to about 1.8m (6ft) deep.

It is possible parts of the city were still visible for some time after, and there are signs that people– whether survivors or looters – did return in an attempt to retrieve abandoned possessions.

The exhibition gives an idea of the different spaces of the home, from the street and the shops that fronted the house to the atrium (entrance area), bedroom, garden, living room, and kitchen. Through the use of over 300 artefacts in context, some familiar, others very new, from wall paintings and sculptures to furniture and cooking pots, it looks at the daily activities in each of these spaces, and the people who performed them. About 10% of the artefacts are from the British Museum, while all the others form part of the reserve and display collections of the Soprintendenza Archeologica Speciale di Napoli e Pompei– including the National Archaeological Museum of Naples, and the archaeological sites of Pompeii and Herculaneum.

Naples Museum has vast reserves, including the gated areas or cells, affectionately known as ‘Sing-Sing’ after the New York prison. These produced several important pieces including a small bronze statue from Pompeii. It shows a man in Greek military armour, holding a sword and spear (now missing) and wearing the protective aegis (cape) of Athena over his shoulder.

His armour is decorated with silver inlay showing the god Apollo in a four-horse chariot. This statue almost certainly represents Alexander the Great, and is evidence of the impact of Greek history and culture on Roman society. Greek poetry, history, and mythology were well-known to cultured Romans, and were widely shown in paintings, sculptures, mosaics, and other art forms, all of which owed a huge debt to the Greeks.

Another masterpiece is the icon of this exhibition, the famous painting of Terentius Neo and his wife from the House of Terentius Neo in Pompeii. They gaze out at us. His finely dressed wife holds a writing tablet in her left hand and in her right a writing stylus, brought to her lips in a gesture of contemplation.

Terentius Neo, wearing a white toga, is perhaps a contender for political office, and grasps a papyrus scroll. Interestingly, his wife stands in the foreground and only she is writing. The painting is intended to be a realistic portrait of the young couple: literate, even learned, and equal stakeholders in business, the household, and Roman society.

We have a full-length statue of the lady Eumachia, shown as a matrona (the lady of the household), who represents the wider civic context of the home. She was extremely wealthy, and paid for the largest building on the forum at Pompeii, where this statue was found. Women were not equal to men: they could not vote or stand for office, but they could own and dispose of personal wealth, and had considerable influence.

As it was buried under 24m (80ft) of volcanic ash that hardened to rock, it is perhaps surprising that Herculaneum has preserved some of the most fragile and perishable evidence of daily life. One three-legged table retrieved from Herculaneum is remarkably similar to one depicted in a fresco of a house from the same town.

The intense heat and the rapid burial of Herculaneum preserved organic material such as wood, leather, and even foodstuffs by carbonising them. Indeed, the reserves in Herculaneum contain the world’s largest and finest collection of Roman wooden furniture. One of the most striking pieces is a baby’s cradle, its two curved rocking supports still acting as stands. Fewer pieces connect us more poignantly with the day-to-day lives of ordinary people: when it was found, it still contained the remains of its nine-month-old occupant.

There are also little reminders that city life can be fraught: a marble double-sided plaque from a street is almost certainly the result of a boundary dispute, resolved by city magistrates.

Pompeii is famous for its extensive ruined cityscape, but it also has large reserve collections. One piece never before loaned is a single-footed table or monopodium. This was originally a display table (cartibulum) in an atrium, where the family conspicuously displayed their wealth and status – a major consideration in Roman society – through fine and valuable silver. The podium is shaped as a panther, the sacred animal of the god Bacchus.

Many of the inhabitants of the cities met their end in the eruption. Their skeletons have been discovered since the earliest days of the excavations, the ash around them sometimes preserving the imprint of their long-vanished bodies and even their clothing. In 1863, Giuseppe Fiorelli, the director of the excavations at Pompeii, poured plaster of Paris into voids in the ash around the bones, and revealed detailed casts of bodies. Now, in addition to the buildings and the artefacts, there were people, and with the necessary respect they, too, have a rightful place in the exhibition. As the statesman and writer Luigi Settembrini remarked ‘…you, oh my Fiorelli, have uncovered human suffering and whoever has an ounce of humanity will feel it’.

In the 1960s, archaeologists excavating a large house in the west of the city discovered under a staircase the bodies of a family, two adults and two children who had died there. The two adults, a man and woman with a child struggling up from her lap, were found side by side. The woman had many gold and silver coins, and a massive gold armlet/bracelet, weighing over 600g (21oz) –hence the name ‘The House of the Golden Bracelet’.

Both adults have their arms raised in the pugilist pose, seen in bodies exposed to extreme heat, in which tendons contract. This is also seen in the little child found nearby, a four- to five-year-old with very well-preserved features and clothing – possibly the most moving of all the casts.

The House of the Golden Bracelet had one other secret, a suite of rooms looking out over a garden, which once had stunning views of the sea. Domestic gardens provided otium (relaxation) in beautiful surroundings. One of the rooms was a summer triclinium (dining room), covered in fine marble and frescoes.

Next to it was a smaller room, perhaps a bedroom or study, with even more amazing decor. All around was a painted gardenscape, with fountains and decorative marbles, flowers, bushes, trees, and birds.

The north wall is the best preserved. A scalloped fountain is flanked by marble panels on herms, plinths topped with heads – in this case a maenad and satyr, followers of Bacchus, god of wine and of gardens. A wilder landscape invades the man-made. The fountain base is hidden by marigolds and ivy, with lilies, roses, and poppies rising around, and larger bushes such as oleander, plane, and palm trees. Birds are everywhere; wood pigeons, swallows, magpies, golden orioles, and blackbirds perch on bushes and take to the skies. These birds and plants would never normally all be seen together, but perhaps had symbolic significance – or perhaps the owner and painters simply wanted to create something very beautiful?

In a final, exquisite detail from the south wall, a nightingale perches on a rosebush – the depiction is so closely observed even the tie securing the bush is shown.

These and the other fascinating exhibits were commissioned or bought, used, and admired by the people of the cities in the course of their daily domestic lives. We hope the exhibition, through these artefacts, will bring the real Romans that much closer.

For more on the latest research from Pompeii and Herculaneum, see CWA 51