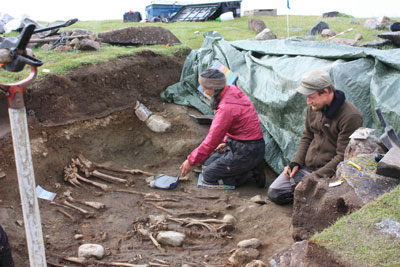 The mystery of what happened to Greenland’s Norse population is one step closer to being solved, as new evidence suggests that the colony did not die out because its inhabitants were unable to adapt to their new environment.

The first Viking settlers arrived in c.AD 1000, and over time their population swelled to around 3,000 people. By the 15th century, however, they had vanished, with no explanation provided by contemporary written sources. This disappearance has long been debated by archaeologists, with some suggesting that the farming communities were defeated by climate change, which made it difficult to cultivate cereal crops for bread and beer, and limited wild plant resources.

Research published in the Journal of the North Atlantic suggests that the Norse colonists simply adapted their diet to cope with their new circumstances, developing a taste for seals.

A team of Danish and Canadian archaeologists have examined 80 skeletons excavated from Norse settlement sites in western and south-western Greenland. Isotope analysis revealed that the population adopted an increasingly marine-based diet, with 50%-80% of their food consisting of seal meat by the 14th century.

Niels Lynnerup of the University of Copenhagen said: ‘Nothing suggests that the Norse disappeared as a result of a natural disaster. If anything, they might have become bored with eating seals out on the edge of the world.’

He added: ‘Young women are underrepresented in graves towards the end of the Norse settlement, indicating that the young in particular were leaving Greenland. When the number of fertile women drops, the population cannot support itself.’