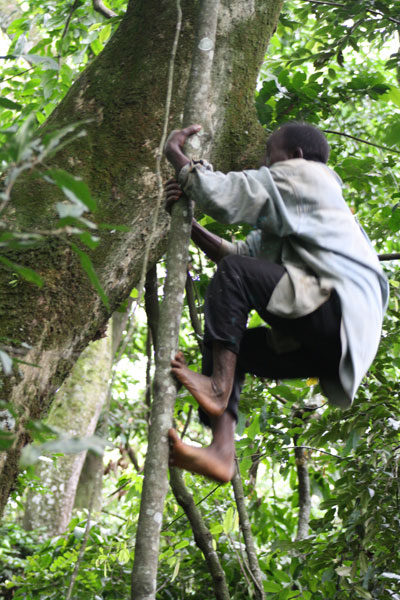 Australopithecus afarensis such as ‘Lucy’ (CWA 32) may not represent the moment hominids finally came down from the trees after all, newly published research suggests.

Ground-dwelling bipedalism is often held up by anthropologists as an essential marker of ‘human-ness’, setting us apart from all other great apes living today, who spend at least some of their time in the trees.

This development was traditionally associated with A. afarensis around 3.5 million years ago, as they were the first human ancestor to possess a rigid ankle and non-grasping foot like ours. It had been previously assumed that such traits would making climbing difficult and necessitate a terrestrial life, but new findings, published in the Proceedings of the National Academy of Science, indicate that this might not have been the case.

Anthropologists from Dartmouth College, New Hampshire, have looked to modern hunter-gatherer communities in Uganda and the Philippines to see how people with feet adapted for an earthbound life could still be effective tree-climbers. The Twa and the Agta both regularly climb trees to harvest honey, and have developed a distinctive style of ‘walking’ up trees with the soles of their feet directly against the trunk, moving their legs and arms alternately.

In order to do this, the climbers were able to bend their feet towards the shin at a dramatic angle, but the researchers found that their leg and ankle bones were no different to those of nearby agriculturalist communities who did not regularly climb. Instead, through frequent climbing, they had developed significantly longer fibres in their calf muscles, allowing for much greater flexibility.

This suggests that anatomically modern feet and ankles might not mean an inability to climb, the team suggest – and that our descent from the trees could have been more gradual than previously thought.