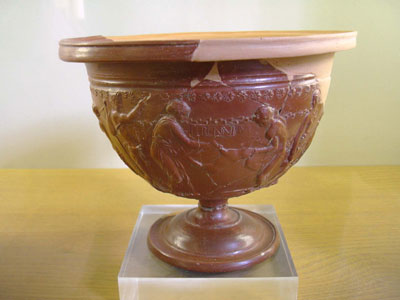 More than 150 archaeologists from 24 different countries gathered in Catania, Sicily, to share their interest in, their knowledge of, and their uncertainties about Roman pottery. Philip Kenrick reports on the Rei Cretariae Romanae Fautores (Devotees of Roman Pottery), which met for its 28th International Congress in September 2012.

The RCRF was founded in 1957 on the joint initiative of an American, Howard Comfort, who was an expert in Italian and Gaulish terra sigillata (known more commonly in Britain as Samian ware), and of Elisabeth Ettlinger, a Swiss scholar working on the Rhine frontier of the Roman Empire. Comfort maintained a wide correspondence, but felt that the pursuit of mutual interests would be much advanced if those studying the field of Roman pottery could get to know one another face-to-face.

His letters are in my possession: they are a delight to read, and a model of courtesy. In March 1957 he wrote to those who had responded to his idea of a meeting to be held at Brugg in Switzerland in conjunction with the Third Congress of Roman Frontier Studies. His letter concludes: ‘Allow me to express my own thanks for the good-will and helpfulness of you who have received and replied to my previous circular, especially by suggesting the names of others who might be invited to participate, and my own personal anticipation of the pleasure of meeting at Brugg with as many of you as may find it possible to attend. It should be a significant occasion – perhaps even historic.’

Almost from the start, there was a programme of lectures, but there was also a regular emphasis on meeting together socially in order to get to know one another. Founder members included Donald Atkinson, Kathleen Kenyon, Eric Birley, and John Gillam. Felix Oswald, though over 90, was briefly an honorary member prior to his death in 1958. Since those early days, the number of participants has grown steadily, and individual membership of the association currently stands at well over 300.

The location of each congress depends on one (or more) of our number offering to host it and, happily, we are not short of offers. The 2014 congress will be held at Xanten on the Rhine, and for 2016 a difficult choice had to be made between invitations to meet at Lisbon in Portugal or at Alexandria in Egypt. The Fautores (as they are known for short) have never yet met in either country. Lisbon won the vote on this occasion by a narrow margin. 2018 is some way off, but potential hosts are already talking of inviting us to Greece or to the Crimea – certainly one of the remoter fringes! (The Bosporan Kingdom was only very briefly a province of the Roman Empire, but ‘Pontic’ sigillata and amphorae from the Black Sea region are found widely in the Mediterranean.)

Material world
As the number of participants has grown, so the character of the congresses has inevitably changed. We meet for a week, and try to break up the dense sessions of lectures with half- or whole-day excursions to archaeological sites in the vicinity. Particularly valued are hands-on displays of pottery. It is on these occasions that those displaying their material may discover from a visitor the identity of some piece that is puzzling them, or that those working in another part of the Roman Empire may recognise objects that they are used to seeing only as rare imports. It can be very entertaining to watch the acknowledged experts arguing over something which has been proffered to them for identification.

The number of lectures is limited to around 50, but since the York meeting in 1996 we have admitted posters on an equal footing – indeed, tabular or numerical material is often much better suited to presentation as a poster than as a lecture.

We always seek to include and to encourage young researchers. By presenting papers or posters, they make known their interests; many fruitful contacts are forged
during meals or coffee breaks, both with their contemporaries who share similar enthusiasms and with more established scholars, whom they can easily tap on the shoulder and ask for advice. Participants frequently produce sherds from their pockets and ask for comments.

Community spirit
Attendance at the congresses is not cheap, but the number of attendees continues to rise, which is a good sign. The organiser of the Catania meeting in September 2012, Daniele Malfitana, first attended a meeting of the RCRF in 1998 as a research student. Now, his own students are following in his footsteps; their evident enjoyment of the event and its inclusive atmosphere is ‘the best result to come from a conference,’ he insists.

The length of the congress and the provision of communal meals in the middle of the day foster academic and social exchanges. Other consequences are apparent to the extent that members who used to work in – and report on – researches in their home region are increasingly presenting papers about research in quite different parts of the Roman world: it is clear that the relationships formed at these meetings are leading to new collaborations between scholars from different countries.

The study of Roman pottery can seem an isolated and dreary occupation at times, when one is shut away in a museum store with endless crates of potsherds. However, meetings such as those of the RCRF, with their very high participation levels – around 90% of those attending present papers or posters – remind us that it is nonetheless a dynamic field of enquiry that can significantly enrich our understanding of Roman history and daily life.