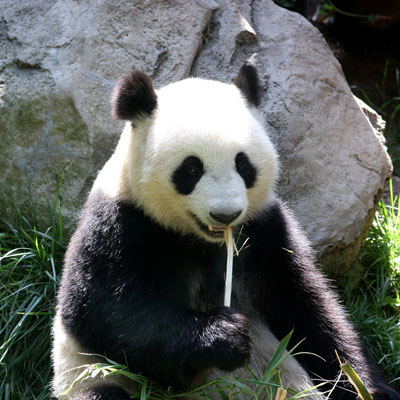 The dogs of archaeology
Dogs have long been used in police work and truffle hunting, and their ability to find people buried beneath the snow of an avalanche has saved many a life, but now their acute sense of smell is being used by archaeologists in Australia to help them find ancient graves.

Migaloo recently broke the world record for canine bone detection (did anyone know there was such a thing?) by finding a 600-year-old grave. Prior to that, the oldest grave detected by a sniffer dog was that of a soldier who had died in the Battle of Snake Hill in Ontario, Canada, on 14-15 August 1814, found by detection dog Candy in 1987.

The dog’s owner, cultural heritage consultant Bud Streten, uses her in his work of locating and protecting traditional burial sites. ‘At the moment in the world of archaeology, there is no other tool that can tell you there are human remains underground,’ he said. ‘Migaloo hits bone fragments with 100 per cent certainty every time.’

Man the meat-eater
Archaeologist Keryn Walshe, of the South Australian Museum, watched Migaloo at work and observed that ‘nobody ever thought there would be any scent left on these old bones’. To the dismay of vegetarians everywhere, it is probably the smell of meat that sniffer dogs are able to detect, for there has been a slew of research recently to suggest that meat-eating made us human and started a very long time ago.

It has long been theorised that a meat-based high protein diet might be the reason why humans developed their big brains and relatively gracile bodies – a vegetable diet by contrast would have involved bulky food that took a lot of chewing, leaving us with gorilla-like bodies – all stomach and jaw and relatively small brained.

The challenge for archaeologists was to find evidence of meat consumption at the period when early hominids were developing their powerful brains. Until recently, the oldest unambiguous evidence of human hunting came from a 400,000-year-old site in Germany.

In September 2012, however, that date for systematic hunting was pushed back thanks to work undertaken by a team led by Professor Henry Bunn of Wisconsin University, who dated the bones from a butchery site in the Olduvai Gorge in Tanzania. The carcasses of wildebeest, antelopes, and gazelles that had been brought to the site for defleshing – most probably by members of the species Homo habilis – proved to be 1.8 million years old.

Ancient anaemia
As if to confirm this new dating, a separate team of researchers working in the Olduvai Gorge as part of the Colorado University Denver Tanzania Field School announced the discovery of a 1.5 million-year-old skull fragment belonging to a two-year-old child suffering from a form of anaemia associated with the sudden deficiency of vitamin B12 (cobalamin): foods of animal origin are practically the only source of this vitamin and though this type of anaemia is often encountered among prehistoric populations, this is the first time it has been found so far back in time.

‘The presence of anaemia-induced porotic hyperostosis indicates that by at least the early Pleistocene meat had become so essential to proper hominin functioning that its paucity or lack led to deleterious pathological conditions,’ reports the study, published in the journal PLoS ONE, adding that ‘this suggests we have only scratched the surface in our understanding of nutrition and health in ancestral populations of the deep past.’

Panda meat
Professor Martin Bell, who specialises in food archaeology, once said that a lot of people must have died in the past before we found out which foods were safe to eat. Indeed, it is perhaps more accurate to describe humans as omnivores than carnivores, since there is probably nothing that we have not tried eating in the past – even, it now turns out, those precious pandas that modern conservationists spend so much time fussing over and trying to persuade to breed.

The evidence comes in a laconic report from Chongqing, in south-west China, where Wei Guangbiao, head of the Institute of Three Gorges Paleoanthropology, announced recently the discovery of large numbers of butchered panda bones at a prehistoric site in the city.

Pandas have always been rare, of course, and were unknown to Western science until 1869. It is now officially a ‘conservation-reliant endangered species’, with some 300 individuals kept in captivity, and perhaps 1,500 to 2,000 living in the wild. Today, you could be sentenced to several years in prison for killing a panda, so even those restaurants that are famous for serving rare and exotic dishes might draw the line at panda meat.

The trial of Leng Zhizhong in China in April 1983 suggests that the meat is not that palatable anyway: hoping to catch musk deer and wild pig in his snares, he one day found a dead panda instead. When the judge asked him what he did with the meat, he replied: ‘My wife cooked it with turnips. We ate some. It did not taste good. So we fed it to the pigs.’

Stonehenge strongmen
Pigs were the food of choice of the people who built Stonehenge, as demonstrated by the huge numbers of porcine bones found by the archaeologists who excavated their houses and food pits at nearby Durrington Walls. Now the journal Antiquity has published a paper arguing that the Neolithic in Britain was based almost entirely on the domestication of animals, and that arable farming, long thought to have been the other leg of the agricultural revolution, was a later development of the Copper and Bronze ages.

There is evidence that crop-cultivation was practised early on in the Neolithic, from around 4000 BC, but that the type of wheat, barley, and legumes introduced from the Continent did not do well in the British climate. Archaeobotanists Chris Stevens of Wessex Archaeology and Dorian Fuller of University College London argue on the basis of 700 assemblages of food remains from 198 Neolithic sites that Britain’s first farmers therefore concentrated on cattle, sheep, and pigs, while continuing to forage for wild fruit, nuts, and seeds.

Neolithic Britain was therefore populated by roaming pastoralists who collaborated to build stone and wood structures like Stonehenge and the adjacent timber circles at Woodhenge and Durrington Walls as a way of staying in touch: Stevens and Fuller say that big midwinter gatherings allowed different groups to hold ritual feasts, arrange alliance-building marriages, and cross-breed their herds. New crops more suited to the northern climate – peas, beans, and spelt – appeared around 3,500 years ago, when the first storage pits and granaries also become a feature of British sites, suggesting a second agricultural revolution in the Bronze Age.

Friendly relations
Mention of marriage brings us to the latest thinking on whether or not modern humans and our Neanderthal cousins ever engaged in a little bit of cross-breeding. Scientists at Harvard and the Max Planck Institute are sure that they did, despite cold water being poured on the idea a few months ago by Cambridge-based scientists who argued that the DNA we h