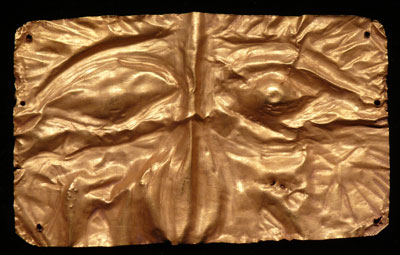 During a recent visit to Mycenae – as a guest speaker with Swan Hellenic – my wife Polly and I were amused by the overheard conversation of another couple, clearly American tourists who, I hastily add, were not from our cruise. Rather overweight
and clearly feeling the heat, the lady sat
on a large rock as her husband explored round the corner. ‘Anything there?’, she enquired. ‘Just more of the same,’ he drawled in response.

Being at Mycenae took me back to my first visit in 1960, when my brother Richard and I spent a long, hot summer roaming round Greece. There was a heady mix of the scent of pine needles and the droning of the cicadas, and the prospect of bottle of retsina at sunset. We walked up to Mycenae then. There was no ticket office, barely a single tourist, and we wandered through the Lion Gate to explore the shaft graves in the company of a few sheep.

On both occasions, thoughts of Heinrich Schliemann surfaced, his discovery of the gold masks, and that famous cable ‘Today I have gazed upon the face of Agamemnon’. We had already seen the masks in Athens, enough to whet any young appetite to become an archaeologist.

However, when digging in Thailand, the word tong (gold) is not one that I want to hear. But at Noen U-Loke, deep into the mound and opening an Iron Age cemetery, the word rang out. I hastened to the scene, and there, being exposed by one of my Thai assistants, was a necklace of gold and agate beads.

The dread is that the word will spread, and rumours of wealth will bring in looters. I assigned a trusted worker to sleep in the square that night, and in the morning, we recovered all the beads for safety. Then we found, in another part of the site, a skull adorned with silver ear coils covered in gold foil. We were fortunate. There was to be no looting, and the local headman secured funds to ring this site, which was the size of Maiden Castle, with a barbed-wire fence for protection.

This would never happen in neighbouring Cambodia or Vietnam. A year after we finished at Noen U-Loke, I received a devastating email from a German colleague saying that an Iron Age site had been discovered by villagers in the north-west of Cambodia, and it was being ransacked by looters who were bent on digging out carnelian and agate beads for an army of locust dealers to take to the Bangkok and Phnom Penh markets. He asked if I could do anything. I managed to secure the help of Dougald O’Reilly, from Australia National University, who rallied together a team of students from Otago and Cambodia to try to rescue at least something.

When I reached the site, it looked as if the entire village had been hit by mortar bombs. There were looting holes everywhere, heaps of human bones, and smashed pots. In one area, the looters’ holes were ordered in straight lines: the police, who had been sent in to stop the villagers, had sold concessions, then sat back and watched.

These Iron Age sites in mainland South-east Asia are crucially important in tracing the origins of early civilisations. In the late 1st millennium BC, Southeast Asia was joined to China, India, and the Mediterranean world in a maritime trade network involving ideas, people, and exotic goods. The result? Iron Age cemeteries in which the new elites were laden with precious jewellery. And this brings me back to Mycenae and the face of Agamemnon.

With great secrecy, in a nodal Vietnamese coastal site on this exchange route near the delta of the Mekong River, three golden masks have been professionally excavated. They have holes in each corner for attachment, perhaps to a wooden backing. One of the graves also contained an iron sword and Chinese coins first minted in the 2nd century BC, which give a good estimate of the site’s age.

A Golden Age
The same secrecy has not been accorded two contemporary sites just over the border in Cambodia. When the site of Bit Meas was recognised, literally thousands descended on it, bought rights from the landowner, and ransacked it. Nothing was left.

The same fate befell the village of Prohear, but here, thankfully, my colleague Andreas Reinecke has embarked on a superb and courageous programme of education and rescue. Mercifully, the road through the village was not dug up, only mined from the edges. He has been teaching the villagers what can be gained from careful digging, and demonstrated this by excavating along the line of the road. His results have been published in a book, The First Golden Age of Cambodia, and they are astonishing.

One old woman was found interred with her head in a bronze Dong Son drum. The villagers told him how they had dug out over 30 drums that must have been imported from Northern Vietnam. She wore a golden bracelet, earrings, hair ornaments, and finger rings. Another bracelet in bronze was decorated with water buffalo horns.

Perhaps the most intriguing of many golden ornaments was a ring from burial 18, which has the image of a man riding a horse. This is the earliest evidence for horse riding in Southeast Asia. But it does not mean that horses were present at Prohear, for the ring was almost certainly imported.

A bronze bowl that covered the skull of another burial has a lead isotope signature that suggests it originated in southern China. A detailed analysis of the gold, silver, and electrum ornaments has provided a detailed insight into the very high level of technical skill on the part of the goldsmiths. Several silver ornaments, for example, were embellished by fusion gilding that required controlled heating to 600-900°C (1,100-1,650°F) to fuse the two metals.

In the 2nd century BC, the Imperial Han began to expand their empire into southern China, where they encountered sophisticated chiefly societies, one of which – the Yelang – buried their dead with their heads in that symbol of elite status, the bronze drum. They also made bracelets decorated with buffalo horns. Andreas Reinecke has given the origins of early civilisations in Southeast Asia a new twist by his entirely plausible suggestion that Yelang immigrants, escaping from Han dominance, came to the lower Mekong area with their new ideas and social order. We are beginning to learn more about the people behind the gold masks.