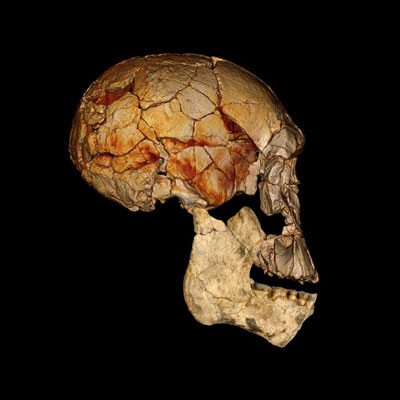 A fossilised face and two lower jaws excavated in Kenya may confirm that Homo erectus, our direct ancestor, coexisted with multiple species of early humans 2 million years ago.

Palaeoanthropologists agree that both Homo erectus and Homo habilis inhabited East Africa during the Pleistocene epoch, but these new discoveries, published in Nature, could settle a 40-year debate about whether there was a third species of our genus present at this time.

In 1972, the Koobi Fora Research Project (KFRP) found ‘1470’, an enigmatic skull whose unusual size and long, flat face prompted some experts to declare it a new species, Homo rudolfensis. Others insisted it was a Homo habilis fossil showing natural geographical or sexual variation, and as 1470 had no teeth or lower jaw, comparisons with other fossils were limited.

Now these new discoveries – found within a 10km radius of where 1470 was excavated – may help to determine where the skull fits in the human family tree.

Dated to between 1.78 million and 1.95 million years old, the fossils include a flat face with a well-preserved upper jaw containing almost all of its molars, allowing palaeoanthropologists to speculate for the first time what kind of lower jaw the individual may have had. The two jaws discovered – which include the most complete mandible of an early member of our genus ever discovered – are a good match, allowing us to reconstruct how a complete skull may have looked.

‘For the past 40 years we have looked long and hard in the vast expanse of sediments around Lake Turkana for fossils that confirm the unique features of 1470’s face and show us what its teeth and lower jaw would have looked like,’ said project leader Meave Leakey. ‘At last we have some answers.’

Dr Fred Spoor, who has led analysis of the new finds, added: ‘Combined, the three new fossils give a much clearer picture of what 1470 looked like. As a result, it is now clear that two species of early Homo lived alongside Homo erectus. The new fossils will greatly help in unravelling how our branch of human evolution first emerged and flourished almost two million years ago.’