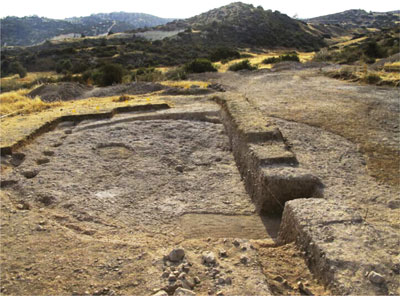 A recently discovered Neolithic site on Cyprus is the oldest farming settlement on any Mediterranean island, reshaping our understanding of the movement of prehistoric farmers.

Excavations at Klimonas have uncovered the remains of a village, dated by stone tools and buildings found at the site to c.9000 BC – centuries earlier than previous evidence of agriculture on the island.

Investigations led by the French Archaeological Mission uncovered a circular mudbrick structure, 10m in diameter, which the research team say is similar to large communal buildings found in the Levant and dated to c.9500-9400 BC. Surrounded by smaller dwellings that have not yet been fully excavated, it has been interpreted as a granary.

Within the village, archaeologists also discovered the carbonised remains of locally grown plants introduced from the Levant, including emmer wheat, one of the earliest grains to be cultivated, as well as the bones of domestic cats and dogs thought to have been introduced from the Middle East.

Until recently it was believed that prehistoric farmers had not settled in Cyprus until 1,000 years after the birth of agriculture in the Middle East in the 10th millennium BC. Archaeologists had known that people visited the island at this time, but there were no signs of crop cultivation and permanent settlement pre-dating c.8400 BC.