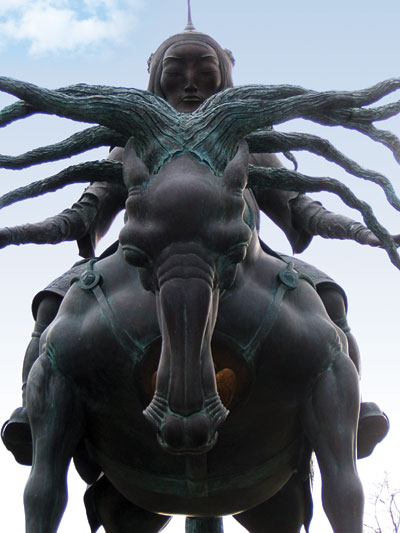 Droit du seigneur
One of life’s most uncomfortable experiences is to be engaged in conversation by a family-history buff. Often these are people who have selflessly devoted their retirement years to tracing all the branches of their family tree. This rapidly becomes an all-absorbing obsession, and there is a huge international industry devoted to taking money off family historians by persuading them to buy computer programs, pay for access to censuses or birth, marriage, and death registers, and purchase family coats of arms, tartans or specially bound books in which to record the results of their research.

Seated next to a family-history obsessive on, say, a long coach trip, you are likely to be treated to a step-by-step account of that person’s journey into their own ancestral past. Like the wedding guest who is stopped on his way to the feast by the Ancient Mariner in Coleridge’s poem, you are doomed, once the narrative starts, to hear the story out as, with growing excitement, the teller of this tale emphasises the archival skill that was needed to track down one particularly elusive relation. You, trapped into listening to this tedious narrative, know exactly where it is leading, because the climax of this story is always the same: when the big family secret is finally revealed, guess what… ‘it turns out that my great, great, great (etc) grandmother was the illegitimate daughter of the queen (or the king, or the earl, or whatever)’. Having finished the story, the narrator sits back with a smile of pride as if to say: ‘you are sitting next to royalty, you know’.

The progeny of Genghis Khan
Well, guess what again… archaeologist and historian Laura Betzig, of Ann Arbor University, Michigan, has found that nearly everybody is descended from a king or emperor if you go back far enough, because one of the perks of the male elite in the past was the right to take the virginity of his female subjects.

Laura has studied the emergence of civilisations in Mesopotamia, Egypt, India, China, Mexico, and Peru and says that the emperors in each case had state-based systems whereby the emperor ‘harvested’ and systematically impregnated the fairest in the land. The religious justification was that the emperor was semi-divine, the representative of the gods on the earth, the guarantor of fertility – a woman giving her virginity to her lord was supposed to be a privilege and a way of ensuring the well-being of the whole community. Well, that was his story, anyway. The practical result is that for every 100,000 people alive on the planet today, 99,920 of us carry the genes of an ancient ruler, compared with a mere 800 who are descended from the common man. Something like 16 million people on the planet are said to be descended from Genghis Khan alone.

Dr Betzig blames farming and the hierarchical society that developed with it. In her paper, published in the journal Evolution and Human Behaviour, she paints a somewhat idealistic picture of hunter-gatherers as egalitarian. ‘If the group got taken over by a big guy who tried to control resources, the others could simply leave and find somewhere else,’ she says. Farming and land-ownership changed all that and made mobility impossible, creating the conditions for the emergence of rulers and tyrants. One of the unexpected benefits, then, of modern democracy is the right to say ‘no thanks’ when a royal comes knocking and demanding lordly rights.

Witches welcome
Another of the democratic rights that underpins the modern world is religious freedom, and it is heart-warming to see that the US military is now catering for the pagans, Druids, and witches serving in the armed forces, as well as for the Christian soldiers who have long had their chapels and padres. The US Air Force Academy in Colorado Springs has looked to Stonehenge, southern England’s mysterious Neolithic stone circle, as the inspiration for a new temple that it has built for cadets who follow ‘earth-based’ religions, including Druidism, Wicca, and various Native American faiths. Built for $80,000 (£50,000), the stone circle is sited on top of a wooded hill and has a propane-fuelled fire pit to allow witches to cast spells and pagans to form ‘circles of power’ by night.

Needless to say, this recognition of pagan belief has not gone down well with conservative Americans, like Bob Barr, a former Republican Congressman, who asks ‘What next? Will armoured divisions be forced to travel with sacrificial animals for Satanic rituals? Will Rastafarians demand the inclusion of ritualistic marijuana cigarettes in their rations?’ But the move has been endorsed by Lt Gen Mike C Gould, Superintendent of the US Air Force Academy, whose statement on the Academy’s website says that it is all about having respect for earth-centred religions based on rights outlined in the US Constitution, and is simply ‘the latest addition to a collection of worship areas that already include Protestant, Catholic, Jewish, Muslim, and Buddhist sacred spaces’.

Mithras is coming home
If the idea of soldiers worshipping cosmic forces sounds far-fetched, consider the case of the Romano-British army: before the Emperor Constantine came along and fought the Battle of the Milvian Bridge under the sign of the Cross, ushering in the Christian era, many a Roman soldier worshipped Mithras, whose initiates met in dark underground temples for highly secretive rituals involving the slaying of a bull and (metaphorical) feasting on its flesh, blood, and semen.

So exotic was the religion that curious Londoners queued for hours for the chance to visit the excavation of a newly discovered Roman temple to the cult that was found in London in 1954. The temple was found on land due to be developed for an office block. Stirred up by all the newspaper coverage of the find, popular opinion strongly favoured its preservation, so the prime minister, Winston Churchill, convened a special Cabinet meeting to discuss its fate. Like the ancient Egyptian temples flooded by the Aswan Dam, it was decided that the Temple of Mithras had to be moved, so it was dismantled, stone by stone, and rebuilt – on the roof of an underground car park. The cost of moving the temple was born by the developer, Legal and General, and it cost so much that one newspaper published a cartoon in which the foreman threatened to sack any worker who found anything Roman. Nearly 60 years later, the temple site is being developed once again – this time by Bloomberg LP, the global business and financial information company, which has decided that it would be quite special to have a Roman temple in the atrium of its new European headquarters building, and so has offered to pay the price of bringing the peripatetic temple back home. Remarkably, the original foundations of the temple were not bulldozed in 1954 and have been re-excavated to serve as the base for the rebuilt temple, with its seven symbolic pairs of pillars leading to the altar and ritual well. Once restored, the dramatically lit underground temple will be open to the public; one wonders, too, whether the cult of Mithras will be born again among Bloomberg’s staff, giving an entirely new meaning to the concept of a bull run.

Heritage crime
At the moment, a bull market seems like a very remote possibility; far more likely is continuing global recession. In the scramble to make easy money in these difficult times, heritage crime has been burgeoning, from the theft of lead from church roofs and of bronze from war memorials and public sculpture in the UK, to tomb-robbing in China.

It is a very sad business to be sure that sees the destruction of anything archaeological in the name of selfish greed, but you cannot help wondering what is the story behind some recent crimes. Is there, for example, somebody out there whose passion for the ultimate interior design accessory is such that they arranged for the theft of Spain’s finest Roman mosaic, depicting the wine god Bacchus, from the Roman spa at Baños de Valdearados? And why would you steal a large non-working model of an American jet fighter? The 10m-long model of a Lockheed Starfighter mysteriously disappeared from the Museum Vliegbasis Deelen, in the Netherlands, recently. The curators are hoping that the theft is a prank, and not the work of scrap-metal thieves. Even respectable pillars of the community are not immune from heritage lust. In the United States, a 63-year-old academic specialising in American constitutional history has just been convicted of stealing 10,000 documents and objects of cultural heritage from libraries and archives.

And what excess of despair, married to tales of secret buried treasure, lie behind the recent arrest of a Greek Orthodox priest and a church elder? Villagers in Fyska, north of Thessaloniki, reported loud drilling noises coming from their church. Police investigated, to find the priest and three others allegedly digging for treasure in the chancel of the church using a pneumatic drill. Heritage experts – honest ones, that is – are fighting back: a team at Glasgow University has been awarded a £1m grant from the European Research Council to study the illegal trade in antiquities. Led by Neil Brodie, they will spend the next four years gathering and analysing data on movements and motives of traffickers and their clients. Let’s hope they come up with some useful ideas for tackling the problem before there is nothing left to steal.