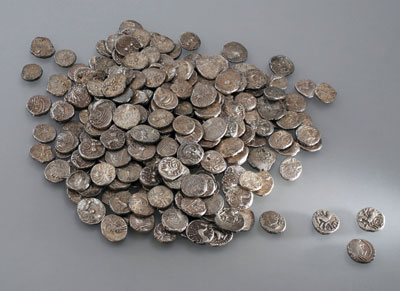 In Füllinsdorf, archaeologists have announced the discovery of the largest hoard of Iron Age silver coins ever to be found in Switzerland.

Almost 300 Celtic coins were found in farmland during a survey by Baselland Archaeology. Cantonal archaeologist Dr Reto Marti told CWA that the coins were buried together in 70 BC or 80 BC, but had been scattered by modern ploughing. ‘In the Celtic period there were no banks, so it was common to bury money to protect it,’ said Dr Marti. ‘Sometimes this was done in a sanctuary because it was believed that the gods would look after the hoard. This could have been the case in Füllinsdorf.’

The 293 coins are decorated with stylised faces and horses, mostly representing the ‘Kaletedou-Quinaren’ type, so-called because they are marked in Greek letters with the word Kaletedou, perhaps the name of a chieftain. In the late La Téne period (150-80 BC) the area around Füllinsdorf was inhabited by the Rauraci tribe, who between 58-15 BC were gradually subdued by the Romans along with the other Celtic peoples of Central and Western Europe. The Füllinsdorf hoard is on display at the Museum.BL in Liestal until 23 September.