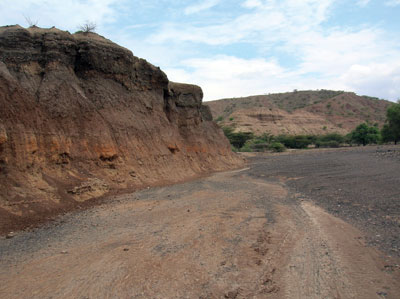 Handaxes and flakes recovered from the shores of Lake Turkana, in the remote north- western part of Kenya, are being hailed as the oldest ‘advanced’ stone tools yet discovered in the world. The mudstone sediment in which the tools were found has been dated to 1.76 million years ago, some 360,000 years older than the Konso tools from Ethiopia, until now the earliest stone tools of their kind. Older, so-called Oldowan tools, named after the Olduvai gorge in Tanzania, date from up to 2.6 million years ago; they consist of split pebbles, used for chopping and crushing bone. These tools – called Acheulian after Saint-Acheul, now a suburb of Amiens in France, where they were first found and described in 1859 – are deliberately shaped on both faces using stone knapping and flaking techniques to create axes with a symmetrical teardrop shape.

The switch from Oldowan to Acheulian is seen by archaeologists as marking a crucial stage in human development, from using found tools (a trait shared by other animals) to the creation of tools to conform to a preconceived shape, requiring both dexterity and imaginative powers thought to be uniquely human. ‘Acheulian tools represent a great technological leap,’ said Dennis Kent, one of the researchers who made the discovery in a region called Kokiselei in Kenya’s Rift Valley, an area relatively rich in human and animal fossils and tools.

The leader of the research team is Christopher Lepre, who says that these tools were found in association with the bones of primitive and now-extinct predecessors of today’s hippopotamuses, rhinos, horses, antelopes, hyenas, and big cats. The tools were probably made by Homo erectus, an ancestor of modern humans, though this poses the question why advanced tools of this type are absent from H. erectus sites outside Africa – for example, at the 1.8m-year-old cave site in Dmanisi in Georgia. Did H. erectus lose their tool- making skills for some reason after migrating from Africa to Asia?
Chris Stringer, Research Leader in Human origins at the Natural History Museum in London, has a much more radical suggestion: he believes that H. erectus probably migrated out of Africa long before advanced Acheulian tools were developed. He also suggests that these newly found Kokiselei tools should not be seen as marking the start of the Acheulian; they are, he says, ‘very crude by the standards of later examples’, and might represent one of many experiments in tool-making that occurred in the deep past. ‘With small populations that were prone to local or wider extinctions, innovations did not always take hold and spread. Novelties like blade tools, and bows and arrows may have been invented and reinvented many times over, due to the loss of individuals and populations, and the knowledge they carried. Populations could have experimented with bifacial working many times before it took hold more widely around 1.6 million years ago.’