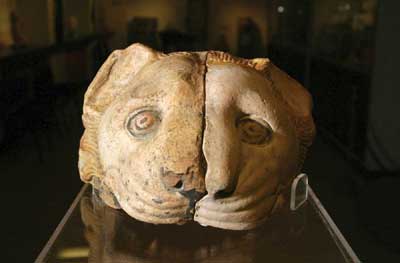 Two halves of a sculpture dating from 500 BC have been reunited after spending most of their existence apart. They were brought together following an international search that began with an expert’s hunch twenty years ago, and led him on a trail from Newcastle in England, to Zurich in Switzerland, via Ohio in the USA.
The sculpture, a terracotta lion’s head, would once have formed the upper portion of a waterspout from the guttering (sima) of a small shrine or temple. The head is likely to have come originally from a Greek sanctuary at San Biagio, near the Greek colony of Metaponto in Southern Italy, where a complete head of the same type was recently excavated.
One half of the sculpture – the right-hand side – has been on display at Newcastle University since the 1970s when it was purchased from Christie’s by the late Lionel Jacobson, a major benefactor of the University’s Greek collection, and given on loan to Newcastle University’s Shefton Museum of Greek Art and Archaeology.
Miraculously, while looking through the catalogue of an exhibition of animals in ancient art, the Museum’s founder, Brian Shefton, came across what appeared to be the other half of the head.
Professor Shefton traced the second half of the sculpture to Switzerland, and the collection of Dr Leo Mildenberg, a renowned collector of ancient art, especially depictions of animals. It so happened that the Mildenberg collection was on tour in the USA, but Dr Jennifer Neils, a museum curator in Ohio, made a plaster cast of the broken edge of the Swiss lion and sent it to Newcastle University.
The cast was an almost perfect fit with the Newcastle half. There was a slight discrepancy because the Newcastle piece still had traces of soil on its broken edges. Furthermore, fragments of the original decoration – the eye and whiskers – are still clearly visible on the Swiss half, while on the Newcastle half, there is less paint remaining and the overall colour is much paler. But these differences simply suggest that the two halves have been subjected to different methods of cleaning. Professor Shefton’s suspicion that the two halves were part of the same head was correct.
Upon his death in 2001, Dr Mildenberg left his half of the lion to the Shefton Museum of Greek Art and Archaeology as a bequest in his will, and subsequently, the Jacobson family donated their half to the Museum. Finally, the two halves are reunited, and on permanent display.
The 85 years old Professor Shefton said of this fortuitous rejoining: ‘I had been immensely pleased to get our half of the lion’s head, and I thought that there was absolutely no chance of the other half ever being found.’