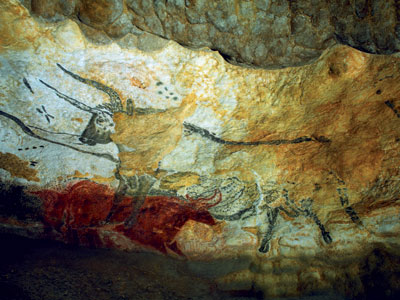 A paper by Paul Mellars and Jennifer French, published in Science, contributes to the widely debated question of why European Neanderthals were replaced by modern human populations from Africa between 45,000 and 35,000 years ago.

Mellars and French point to a population explosion among modern humans in the Aquitaine region of south-western France, with a tenfold increase in population density during that period.  If that finding is typical of the whole of Europe, numerical supremacy would have resulted in direct competition for resources, with modern humans winning through their better survival tactics. Aquitaine – centred on the Dordogne, with its world-renowned cave art – was chosen as the study area because it contains the highest density of Neanderthal and early modern human sites recorded in Europe. A simple increase over time in the number of occupied sites was ruled out as the main indicator of population growth, as this could simply reflect changing patterns of mobility. Instead, density of occupation was chosen as a proxy for population size, as measured by the quantity and weight of retouched stone tools and associated animal food remains found at each site.

The authors say that the precise technological, economic, biological, social, and other adaptive mechanisms that led to a rapid growth in populations of Homo sapiens are still a matter of debate, but they are likely to have included improved hunting, food-processing and food-storage technology, as well as increased social integration that involved mating and alliance networks between different groups. They add that the proliferation of symbolic, artistic, and ceremonial practices suggest enhanced planning capacities and developed social relationships.

A range of climatic and associated environmental factors could also have played a critical role in the demographic replacement and extinction process – above all, the sudden climatic cooling associated with Heinrich event 4 (named after the German climatologist Hartmut Heinrich) in the oceanic records that occurred around 40,000 years ago.