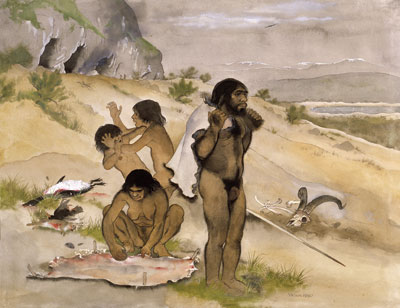 A paper in Science argues that modern humans gained significant health benefits from interbreeding with Neanderthals. Scientists last year suggested that interbreeding had taken place between 90,000 and 65,000 years ago in western or central Asia, and that all of the world’s non-African populations owed up to 4 per cent of their genome to Neanderthals. Peter Parham, Professor of Immunology at Stanford Medical School  in California, now argues that what we gained from Neanderthals was  a ‘ready-mixed cocktail of disease-resistant genes’. These are responsible for the functioning of our immune system, in particular a group known as the HLA class I genes, which govern the body’s ability to recognise and destroy dangerous pathogens.

Matt Pope, of the Institute of Archaeology in London, specialises in Neanderthal research. He says: ‘rather than having to evolve disease resistance from scratch as they moved out of Africa and into Asia and Europe, this interaction provided humans with a fast track to adapting to new environments.’

The downside, says Professor Paul Norman, co-author of the paper, is that the same gene group can trigger autoimmune disease, when the body mistakes its own tissues as foreign and potentially dangerous. ‘It looks to me like modern humans acquired these genes, but were not prepared for them; we had not grown up with them, and in some circumstances, they can start to attack us as well as viruses and other pathogens,’ he says.