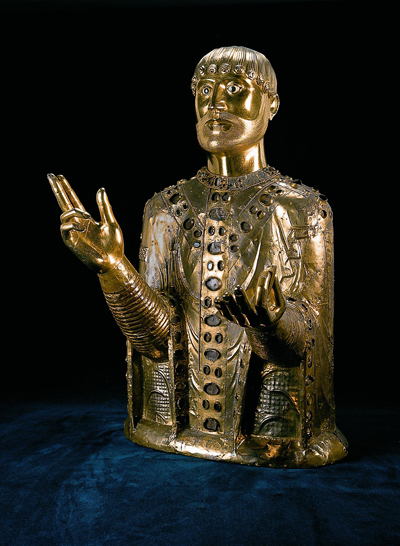 Religion was an intrinsic part of the Medieval world, unquestioned and all pervasive. In an age when medical knowledge was limited and life harsh, such objects were imbued with significance well beyond their earthly manifestations. To touch a fragment of human remains believed to be holy, was to connect directly with the divine, the saint in question mediating with God on the penitent’s behalf. The 4th-century theologian Basil of Caesarea wrote: ‘Those who touch the bones of one of the martyrs participate in their sanctity.’ To the average worshipper, there was nothing ghoulish or macabre about bits of bone, dried body parts, or teeth – indeed, the most skilled artisans of the day were employed to design and create stunning receptacles made of precious metals and stones in which to keep these precious fragments.

Nor is there anything unique about this desire to acquire objects associated with significant people: a jacket belonging to Michael Jackson was sold recently for more than £1m; one of Margaret Thatcher’s handbags went for £25,000 earlier this year; and anything once owned by Princess Diana is guaranteed to fetch a good price – certainly more than its inherent value.

The cult of saints emerges from the early Christian Roman Empire and reaches its climax just before the Reformation at the beginning of the 16th century. The change from cremation to inhumation in the 2nd century AD, as the wealthier strata of Roman society adopted the fashion for elaborately carved marble structures – usually with gabled lids to mimic the roof of a house – meant that human remains were preserved. Such early tombs were often below ground in catacombs outside residential areas, with the rich being interred in ornate sarcophagi, and the poorer laid out on carved shelves or loculi. Attitudes to the dead were very different from today: feasts were often held at the burial site by relatives of the dead to celebrate the lives of the deceased on the anniversary of their death, birthday, or other significant event. Scenes of such celebrations are often depicted on the sarcophagi and in the decorations around tombs of the period; and from this practice, the festivities marking the anniversary of the deaths of the early Christian martyrs at their tombs eventually evolved – the precursor of recognised saints’ days.

These observances, in turn, developed into regular pilgrimages by the devout, their routes determined by the locations of saintly remains. Attracting a steady stream of visitors to a site brought with it obvious financial benefits, much as the tourist industry does today. In the 6th century, the shrine of St Menas – martyred at the end of the 3rd or beginning of the 4th century – in Egypt was responsible for a whole pilgrims’ city at Abu Mina, supporting hostels, baths, shops, and other peripheral services. Small terracotta flasks, stamped with the name and image of Menas, have been found throughout the Mediterranean area. These would have been filled with water or oil that had been poured over the bones of the martyr and collected from the bottom of his sarcophagus.

To ensure healthy traffic, it was vital that a local saint kept up his or her quota of miracles and divine interventions. Those who did not were ‘punished’ by public humiliation: the saint’s tomb would be covered with thorns, and during church services the relics placed on a special penance mat laid out in front of the altar. The liturgy would then be celebrated in a minimal way, in a lowered voice, with no pomp, ceremony or special clothing. Such rituals were eventually banned by the Second Council of Lyon in 1274.

But those relics considered powerful were displayed with great pride in reliquaries of superb craftsmanship. It was not necessary to have the whole body: tiny pieces of bone, hair, or bodily fluids were carefully wrapped in cloth and labelled, and then set in bejewelled containers that were portable – and more palatable to look at than decayed body parts.