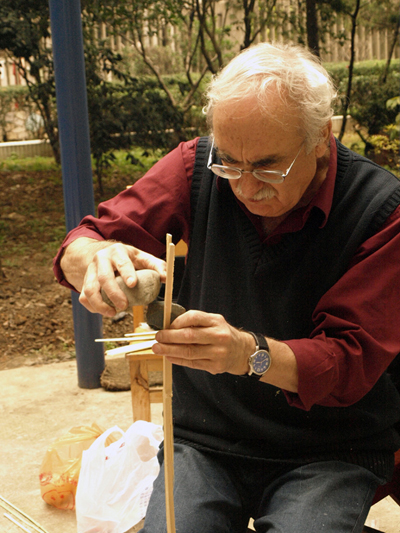 Bamboo was probably used as an alternative to stone in South East Asia, scientists believe. The lack of a diverse and sophisticated ‘toolkit’ of stone tools at Prehistoric sites in the region, as found at sites of similar date in other parts of the world, has long puzzled archaeologists, who have concluded that some other, bio-degradable, material must have been used for making the earliest tools – such as the bamboo that grows so plentifully in the region.

Archaeologists who set out to find out more about bamboo tools have published their findings in the journal Quaternary International; they confirm that crudely knapped stone tools performed remarkably well for chopping down bamboo and for making bamboo knives. The latter were efficient at cutting up meat, though not animal hide. Team member Ofer Bar-Yosef, Professor of Prehistoric Archaeology at Harvard, was even able to make sharp bamboo spears capable of killing animals.

To make the bamboo tools, the researchers used simple flaked cobbles like those found on Paleolithic sites in present-day China, Brunei, Cambodia, Indonesia, Laos, parts of Malaysia, Myanmar, Philippines, Thailand, East Timor, and Vietnam. Typically, these consist of hand axes, cleavers, and choppers made by flaking one side of water-eroded pebbles.

Such rudimentary tools should not be taken to imply that our human ancestors were culturally less advanced in South East Asia compared with their cousins in Africa or western Eurasia. On the contrary, says archaeologist Metin Eren, the stone knapper who crafted the tools used for the study, the stone choppers performed remarkably well for sawing, shaving, splitting, peeling, and chopping bamboo, even when wielded by modern people, inexperienced in working bamboo.

Using pork purchased from a local market, the researchers found that they could use the knives for butchery, but not for cutting through tougher materials, such as hide. The replicated stone tools also enabled them to produce strips of bamboo thin enough for weaving into baskets.