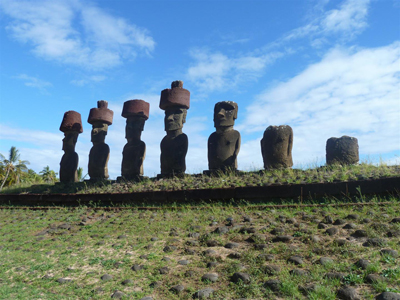 The first settlements on Rapa Nui (Easter Island), Hawai’i, and New Zealand have been dated to the period between AD 1190 and 1290 thanks to a massive carbon dating exercise, the results of which have just been published in the Proceedings of the National Academy of Sciences of the USA (108: 1815–1820).

Janet Wilmshurst and her colleagues worked on some 1,400 carbon samples of organic material found in middens on these remote Pacific and Polynesian islands, favouring materials such as short-lived plant matter, the eggshells of land birds, and twigs that had been gnawed by the Polynesian rat Rattus exulans, which can only have reached these islands by travelling with humans in their boats.

Focussing on such material helps to eliminate residual dates from matter – such as marine shells or wood – that might already be old by the time it is deposited in the midden.

The results give a consistent picture of the rapid and relatively late settlement of islands that are but dots in the vast spaces of the Pacific Ocean, such that navigating to them counts as one of humanity’s most impressive achievements.

The islands of the western Pacific had already been settled by Lapita people, probably from Taiwan, by about 1000 BC; but it was not until the 11th century that people set out to explore the eastern and southern ocean, travelling immense distances with no navigational aids, guided only by the stars.

The new analysis suggests that eastward expansion began from the Samoa-Tonga region between AD 1025 and 1121, reaching the Society Islands, some 1,250 miles (2,000km) away, and possibly as far as the Gambier archipelago. This was followed by a major wave of expansion eastwards, northwards, and southwards in the 13th century, at a time when European Crusaders were fighting to reconquer the Holy Land from Saladin, and King John was battling the barons in England over rights that would be enshrined in the Magna Carta
‘These remote islands, from the tropic to sub-Antarctic oceans, were all colonised in one major pulse between AD 1190 and 1293,’ the team members say. Dating the first settlements on Rapa Nui to around AD 1200–1253, on New Zealand to 1230–1282, on the Marquesas to AD 1200–1277, and on Hawai’i to AD 1219–1266, they claim that ‘Polynesian seafarers discovered nearly every island of the eastern Pacific within about one century, a rate of dispersal unprecedented in oceanic prehistory’.

The team explains this as the result of rapid population growth on relatively small islands, purposeful exploration, and technical innovation in sailing vessels, such as the advent of the double canoe. They also note that the 13th century was marked by an El Niño peak; the resulting increase in frequency of tropical westerly and subtropical easterly winds would have helped in the discovery of the more remote islands.

Whereas previously it was believed that the islands had been settled as early as the 7th century AD, these new dates have implications for anyone studying the impact of human occupation on island ecosystems, says Dr Wilmshurst, who argues that deforestation and the extinction of native plant and animal species as a result of human settlement should now be measured in decades rather than centuries.

‘Whereas these declines were thought to have occurred over a thousand years or more, it now appears that, in most cases, several hundred years was all it took,’ the team concludes: ‘Impacts were immediate, severe, and continuous.’