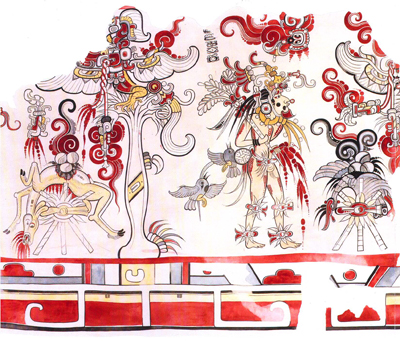 When first discovered in 2001 by the archaeologist William Saturno of Boston University, the mural-covered room at San Bartolo, a remote and ancient Maya city site in the Guatemalan rainforest, was described as the ‘Sistine Chapel of the Maya’, because of the quality of the paintings. The publication of The Murals of San Bartolo, El PetÈn, Guatemala, by the Boundary End Archaeology Research Center in North Carolina, now makes it possible for everyone to see what has, until now, been witnessed only by a handful of scholars crawling through a narrow tunnel into the room, located at the centre of a temple-pyramid associated with the oldest known Maya royal tomb.

The murals themselves have been carbon-dated to around 100 BC, making them the oldest yet known examples of Maya art. There is nothing primitive or tentative about this art, which depicts a procession of elaborately dressed men bringing offerings to a figure identified as the maize god, who was also flanked by kneeling women presenting further offerings. In another scene, an exploding gourd brings forth four naked infants and a fifth wearing a headband and ear-ornaments.

Further scenes depict offerings of deer, turkey, and fish, representing the fruits of the land, air, and water, and the figure of Hun Ahaw – one of the protagonists of the great Maya creation epic – thrusting a long pointed stick through his penis, an early instance of blood-sacrifice that was to become such a notable feature of later Maya religious observance.

The sophistication of the art and the complexity of its iconography show that the Maya creation myth predates by several centuries the famous Classic Maya murals of Bonampak in Mexico, dating from AD 790. The authors also argue that the San Bartolo discoveries require a rethink of the existing division of Mayan culture into the Preclassic period, from 1200 BC onwards, characterised by small farming villages, with temple-based cities emerging in the so-called Classic period of AD 300–900, manifest in such familiar sites as Tikal, Palenque, and Chichén Itzá.

Equally important is the evidence for the Maya writing system, which is, of all the scripts known from the pre-Hispanic Americas, the most complex. Most Maya texts date from the 4th century AD onwards, but here a well-preserved enthronement scene – showing a figure being presented with an elaborate royal headdress by a figure in an intricately woven cloak – has a column of early Maya hieroglyphs, including the sign that reads ahaw or ‘king’. Earlier inscriptions, dating from the 4th century BC, were found on the inscribed blocks used to construct the pyramid tomb, described by Dr Saturno as consisting of a succession of buildings, one inside the other like Russian dolls, with some of the materials for each new structure robbed from its partly demolished predecessor.