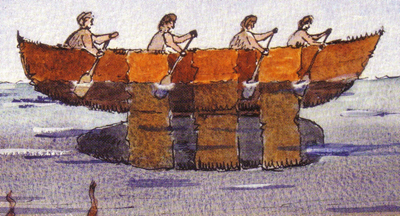 Francesco Benozzo, of the University of Bologna, studies the continuity of Palaeolithic words into recent languages as a means of understanding ancient societies. In The European Archaeologist, he reports on recent field research near the Portuguese megalithic site of Almendres, where the name used to indicate a megalithic stone is ventrecurgo, and near Kercado, in the Morbihan region of Brittany, where the word bronbag is used. Both words mean the same, he says: ventre means ‘belly’ and curgo is the Celtic word for ‘boat’, found in Irish currach and Welsh cwrgw (the origin of English ‘coracle’); while bron is the Breton word for ‘breast’, and bag is the Breton word for ‘boat’.

Benozzo believes these dialect names confirm the hypothesis that the large slabs of stone used for building megalithic monuments were transported by lashing them to the bottom of a skin-covered boat. This hypothesis was first proposed by Geraldine and Matthew Stout in their book on the passage tomb at Newgrange (Newgrange, published by Cork University Press), based on the practice of the quarrymen in Ireland who, until the 19th century, transported 3-tonne blocks of stone in this way, waiting for the tide to lift the boat and its underhung cargo of stone, which weighed far less under water.

‘The words ventrecurgo and bronbag indicate that the stone was seen and described as the ‘breast’ or ‘belly’ of the boat and the two words preserve a memory of the prehistoric transportation of stones by sea,’ Benozzo argues, adding that the two words corroborate linguistically an explanation that was previously ‘a brilliant archaeological conjecture’.