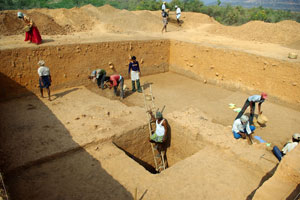 Volcanic ash from the Eyjafjallajokull eruption in Iceland caused airline havoc in April 2010, but the far bigger Toba volcanic eruption that occurred on the Indonesian island of Sumatra 74,000 years ago nearly wiped out human life in Asia. Now, an international multidisciplinary research team, led by Oxford University in collaboration with Indian institutions, is using the ash from the Toba super-eruption as a key dating aid. Just as the eruption of Vesuvius in AD 79 provides a frozen moment in time, so the ash from Toba provides an archaeological horizon that tells us where people were living and what tools they were using immediately before and after the eruption occurred.

Focussing on the Billasurgam cave complex, in Kurnool, Andhra Pradesh, the team found deposits ranging in date from at least 100,000 years ago to the present. They contain a wealth of animal bones such as wild cattle, carnivores and monkeys, as well as worked stone cores and flakes lying beneath the ash, proving that human populations were present in India prior to 74,000 years ago, which is about 15,000 years earlier than some have predicted.

Another key discovery is that tools of similar type are also found soon after the Toba super-eruption, suggesting that the people who survived the eruption were the same populations, using the same kinds of tools, and not later migrants. Although some scholars have speculated that the Toba volcano led to wholesale environmental destruction, this research implies the existence of a mosaic of ecological settings, and that some areas experienced a relatively rapid recovery after the volcanic event.

Project Director Dr Michael Petraglia, Senior Research Fellow in the School of Archaeology at the University of Oxford, said: ‘This exciting new information questions the idea that the Toba super-eruption caused a worldwide environmental catastrophe. That is not to say that there were no ecological effects. We do have evidence that the ash temporarily disrupted vegetative communities and it certainly choked and polluted some fresh water sources, probably causing harm to wildlife and maybe even humans.’