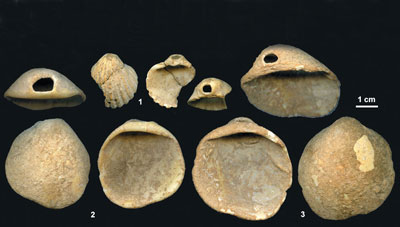 Professor João Zilhão and colleagues at the University of Bristol, UK, have found pigment-stained and perforated marine shells at two Neanderthal-associated sites in south-east Spain (the Cueva de los Aviones and the Cueva Antón, both in the province of Murcia) which prove that Neanderthals wore neck pendants and used red, black and yellow pigments for body ornamentation.

The discovery, says Zilhão, finally puts paid to ‘the widespread view of Neanderthals as cognitively inferior to early modern humans’. Writing in the Proceedings of the National Academy of Sciences, Professor Zilhão said: ‘This is the first secure evidence that, some 50,000 years ago – ten millennia before modern humans are first recorded in Europe – the behaviour of Neanderthals was symbolically organised.’

Similar finds of colourant have been made before at Neanderthal sites, but have been explained as the result of Neanderthal scavenging of abandoned modern human sites, or Neanderthal imitation of behaviours observed among contemporary modern human groups. Accurate radiocarbon dating of the shell and charcoal samples from the two caves (undertaken at the University of Oxford’s Radiocarbon Accelerator Unit) was crucial to proving that they predate the arrival of modern humans.

Professor  Zilhão has also long argued that perforated and grooved teeth and decorated bone awls found in the Châtelperronian culture of France are Neanderthal. The Murcian results, he says, ‘remove the last clouds of uncertainty concerning the modernity of the behaviour and cognition of the last Neanderthals and, by implication, shows that there is no reason any more to continue to question the Neanderthal authorship of the symbolic artefacts of the Châtelperronian culture; we should recognise that identical levels of cultural achievement had been reached by both Neanderthals and modern humans by the time they came into contact in Europe’.