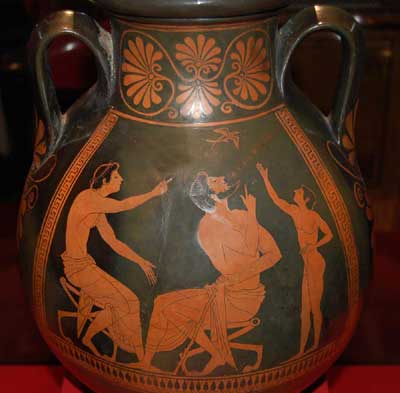 I do not think I quite believe the main theme of the new exhibition at Somerset House – The Road to Byzantium: Luxury Arts of Antiquity. Their theme is that classicism survived right down into the Christian culture of the Byzantine Empire: the buzz word is ‘continuity’ and the exhibition, a collection of some of the finest classical pieces from the State Hermitage Museum in St Petersburg sets out to demonstrate this.

I think the roots of the argument lie in the sources of the collections at the Hermitage. There are two main ones. Firstly the classical material derived ultimately from the Greek colonists who established some very successful colonies around the Black Sea – though some of the best pieces come from the barrows of the native Scythians. Then there is a fascinating and more recent collection of material from Siberia where Byzantine goods were traded, or presented in gift exchange, to the fur traders of what we would call the Byzantine period, in the late 1st millennium AD.

The classical group is perhaps best represented by one of the star pieces of the exhibition – the ‘First Swallow of Spring’ vase. This is a superb red figure vase that must have been potted around 510 BC in Athens. There are three figures looking up at a swallow and, cartoon fashion, there is a text under each. The left hand figure is saying ‘Look a Swallow’ to which the central figure replies ‘Yes by Heracles’ and the boy on the right cries ‘There she is’ and the whole scene is drawn together by the words overhead ‘It is already Spring’. On the other side is an equally superb painting of two wrestlers – note how their limbs are drawn mostly in a single continuous line – I wish I could draw like that. The vase has an interesting modern history. It was found in an Etruscan tomb in Vulci in 1835 and acquired by the Russian Ambassador who took it back to Moscow. However his descendent then lost it in a card game to AA Abaza who gave it to the Hermitage in 1901.

Compare this, however, with another superb piece at the other end of the chronological scale. This is a dish of the 12th century AD showing the flight of Alexander the Great into heaven. Alexander the Great wanted to ascend into Heaven, so he harnessed two Griffins to his Chariot. He then held pieces of meat on long sticks above the griffins – he can be seen doing this in the medallion – and the griffins, desiring to get at the meat, flew ever upward into heaven; getting into heaven is very easy, if you know how. The medallion is surrounded by additional engraved images and scenes including Pegasus and Bellerophon and King David on his throne. The dish was almost certainly made in Constantinople in the 12th century AD.

It was found however rather far away and, according to the catalogue, ‘among a collection of silver objects in the village of Lopkhari in the Shuryshkarsky district of the Yamalo-Nenets autonomous region in 1982’. It was then presented as a gift to the Hermitage Museum by the government of the region; one would love to know the real story behind this. I have now tracked down the find place in an atlas, and it appears to be a very, very long way away. It is on the other side of the Urals in the valley of the River Ob, and only 100 miles or so from the Arctic Ocean. This is real Siberia, today rich in oil and minerals but yesterday rich only in fish and furs. What was this dish doing there (if that is where it really came from)? The answer, surely, is that here we see the barbarian fur traders, who have somewhat tardily acquired a taste for classicism, obtaining by gift or exchange a superb bowl from Byzantine craftsman who were delighted to produce a work of art in the old and virtually forbidden classical tradition. It would not do at all on the home market, but was just the thing for the barbarians. Lucky barbarians!

The exhibition, organised by the Courtauld Institute of Art and the State Hermitage Museum is at Somerset House in the Strand, London (tel: 020 7845 4631) until 3 September 2006, admission £5. The catalogue The Road to Byzantium is published by Fontana for £20.