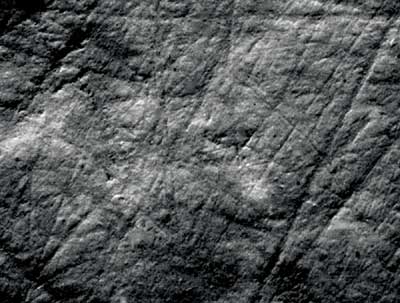 According to a second analysis of teeth, undertaken by a team led by Peter Ungar, Professor of Anthropology at the University of Arkansas, our forebear, Homo erectus, favoured crunchy, brittle and tough foods, while other early humans seemed to favour softer fare.

Homo erectus, who lived between c. two million to 400,000 years ago, was the first known hominid to walk upright and to fashion significant tools. Just like modern humans, there is clear evidence that H.erectus ate a variety of foods and crunched and chewed on diverse foods, such as tough meat and hardy root vegetables. This omnivorous trait is not apparently shared by other early hominids, such as the ‘handyman’ and adept tool-maker H. habilis, who lived around 2.3 to 1.6 million years ago.

Ungar’s conclusions are based on marks on 18 teeth belonging to these two species together with examples from unconfirmed proto-humans. Ungar and his team initially determined how food affects teeth by first studying the chopping tools of existent primate species and two recent foraging groups, the Aleut and the Arikara. They then took this data to inform their analysis of the hominid teeth, which they magnified and studied using computer software.

They observed that the H.erectus teeth exhibit scratches and pits caused by eating tough leaves and crunchy foods. The scratches result from the teeth scraping and cutting across meats, while the pits come from pounding down on brittle foods such as nuts, seeds, roots and tubers. By contrast the teeth of H. habilis, had a far greater number of pits and striations suggestive of pulling down on fruit and leaves. It appears that H. habilis was therefore more of a fruit and vegetable eater than the apparent omnivore H. erectus.

‘Both species probably focused on high energy-yield, easy-to-consume foods, such as soft fruits when they could get them,’ explained Ungar. ‘The differences between the teeth of H. habilis and H. erectus suggest that the latter may have focused a bit more on tough foods including meat, tough tubers or other items.’

But why? The reason for H.erectus’ adoption of a more flexible diet may be the result of the change in climate and food sources around 2.5 million years ago. At that time, cooling and drying appear to have spread across Africa which probably converted forests to grasslands and increased overall climate variation.