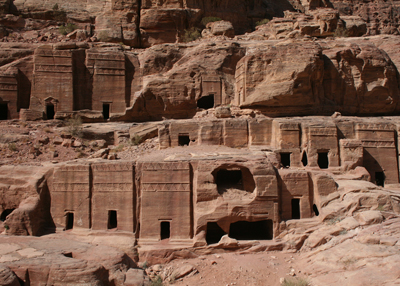 Before 1812, Petra was one of the ancient world’s ‘lost cities’: it was known from historical references, but the site had not been located on the ground. The Swiss traveller, explorer, and antiquarian Jean-Louis Burckhardt (1784-1817) set out on a long expedition in 1810, whose ostensible purpose was to locate the source of the River Niger. In fact, he got no further than the Sudan before contracting dysentery and dying in Cairo in 1817. In the meantime, however, he had become an accomplished Arabist and recorded a wealth of geographical, ethnographic, and archaeological data in a secret journal – secret because the dangers of the Orient were such that he was forced to travel in disguise, passing himself off as an Indian Muslim trader.

Hearing rumours about a lost city, he employed a local guide and told him that he was a pilgrim seeking the Tomb of Aaron (overlooking ancient Petra). Burckhardt managed to see some of the antiquities; but he began to attract suspicion, so his investigations had to be cut short. Nonetheless, he correctly identified the site as Petra, and the publication of Travels in Syria and the Holy Land in 1822 brought the ancient city to the attention of world scholarship.

The ancient city lies in a wide wadi fed by winter flood-waters, with steep, craggy mountains on either side. The mountains are pitted by some 800 rock-cut tombs. Most are relatively simple, presumably the mausolea of prosperous but fairly ordinary families. Some are more elaborate, perhaps representing a wealthier mercantile elite, while a few – ‘royal tombs’ of one sort or another – rank among the greatest monuments of antiquity. Most famous is ‘The Treasury’, which stands almost 50m high, dominating the approach through the Siq, the narrow, steep-sided gorge which gives access to the site from the east. In the wadi beyond lies the city itself, its colonnaded street lined with massive temples rising in tiers of steps and platforms on either side. Higher up the slopes lie the houses, business premises, and rubbish dumps of the ancient residents, still lying beneath metres of rubble, almost entirely unexcavated.

The availability of water made Petra an important stopping-place for desert caravans arriving from Iraq and Arabia with cargoes of luxury goods bound for Mediterranean markets. Because of this, the site became a place of burial for the nomadic tribes who controlled the trade-routes. The expansion of Graeco-Roman civilisation increased the demand for luxury goods, enriched the Nabataean Arab tribal-mercantile elite, and made it possible for them to found a city and fill it with monumental architecture and grand houses. For a brief period, from the 2nd century BC to the 1st century AD, surpluses accumulated through trade between the Orient and the Mediterranean made it possible for Arab merchants to carry out an ‘urban revolution’ at Petra.

In doing this, they appropriated the cultural forms of their neighbours, so that the art and architecture of Nabataean Petra, particularly those of its tomb monuments, represent a fusion of Mesopotamian, Egyptian, and Graeco-Roman influences. This distinctive ancient Arab urban style anticipates the spectacular fusion of Persian and Byzantine influences which would characterise Early Islamic culture. The people of the desert, both in the 2nd century BC and in the 7th century AD, brought their language, religion, and customs with them; but in creating (or recreating) urban life, they were compelled to draw on the ready-made traditions they inherited from others.

Petra at a glance

What is it? An ancient caravan city and necropolis
When was it built? 2nd century BC-1st century AD
Who built it? Nabataean Arab traders
Who discovered it? Jean-Louis Burckhardt
When was it discovered? 1812