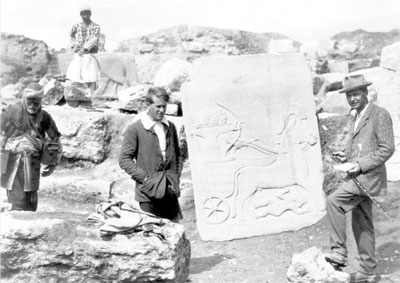 Imperial rivalry and a growing awareness that little was known of a major Anatolian civilisation of Late Bronze Age and Early Iron Age date – the Hittite Empire – led to a British Museum-funded expedition to explore the remains at Carchemish immediately before the First World War.

The Hittites were represented by monumental masonry, sculpture, and hieroglyphics at a number of sites – most importantly Boghazköy and Yazilikaya in central Anatolia – and by references in Egyptian documents discovered at Al-Amarna in the 1880s. The archaeology testified to a rich and extensive civilisation. The Amarna tablets told of a great imperial power in the 14th century BC.

Middle Eastern excavations were national prestige projects and diplomatic (even espionage) opportunities. There was intense rivalry among British, French, and German teams to secure the concessions for major sites – usually those with strong Biblical or Classical associations.

The British Museum, which first worked at Carchemish in 1878, obtained permission from the Ottoman authorities to resume work. The expedition was headed by David Hogarth and Campbell Thompson, assisted by Leonard Woolley and Thomas Edward Lawrence. The former would later make his name as the excavator of the Royal Tombs at Ur; the latter made his during WWI. The 200- to 300-strong Arab workforce was managed by Lawrence, who thus became an accomplished Arabist as well as archaeologist by 1914.

The site comprises a strongly fortified ‘inner town’ containing citadel, palace, and associated buildings, and a ‘lower town’ presumably once occupied by a community of traders, artisans, and labourers. The former was the main focus of the 1911-1914 excavations.

Preservation of the citadel itself was generally poor due to destruction and rebuilding in the Assyrian period, but the excavators did reveal a monumental stairway leading to a wide terrace. This was lined with rows of relief-sculptures depicting gods, kings, priests, and warriors, together with hieroglyphic inscriptions.

Below the citadel, the remains of a water-gate on the banks of the Euphrates and parts of the Hittite palace were uncovered. The water-gate was flanked by great lions carved from dolerite stone and inscribed with hieroglyphics. The palace yielded yet more monumental relief-sculptures, arranged in alternating slabs of black dolerite and white limestone. The finest showed what appeared to be two kings followed by eight children and a woman carrying a baby, identified by hieroglyphic inscriptions. On the opposite side of the portal where these reliefs were displayed were matching slabs showing royal ministers and servants.

Soundings at the site showed that occupation extended back to the mid-3rd millennium BC, with major phases in the Early Bronze Age, the Late Bronze Age, and the Early Iron Age. The latter two were Hittite occupations, confirming the longevity of this civilisation. The scale of the site, the monumentality of the defences, the citadel, and the palace, and the quality of the art threw new light on the success of Hittite civilisation. Like other Middle Eastern empires – Egyptian, Assyrian, Babylonian, Achaemenid – the artistic repertoire reveals a preoccupation with rulers, courts, armies, and the pageantry of imperial power.

Sadly, much has been lost. Carchemish straddles the modern Turkish-Syrian border, and there have been no excavations since the 1920s. Little of the sculpture had been moved when the pre-war excavations were forced suddenly to end. Woolley reported on its fate: ‘A Turkish army officer… decided to move the stones… Many were smashed, the rest put on railway trucks, but pitched off on to the embankment, where they remained until 1921 or later. Some pieces were stolen or sold; one lion’s head ultimately came to the British Museum by purchase (much to my disgust) and other bits to the Louvre.’