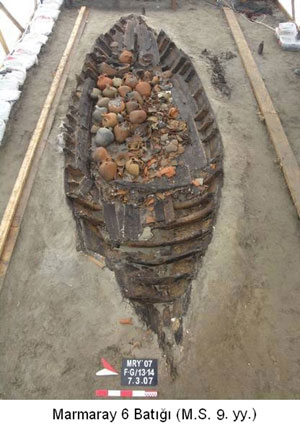 As the capital of two great empires, Istanbul (and in its previous incarnation as Constantinople) contains a great wealth of culturally important material. Little wonder that it has been named Europe’s Capital of Culture 2010. The latest big archaeological story comes from the Marmaray rail link project, which will connect the European and Asian continents via a tunnel under the Bosphorus. The treasures brought to light in the course of this work, and carefully excavated in a series of archaeological projects, have already made a significant contribution to Istanbul’s cultural history.

Of particular note are the discoveries from the Yenikapi, a district known for hundreds of years as Istanbul’s fruit and vegetable garden. In fact, Yenipaki was also once the site of the Harbour of Theodosius. Commissioned by Emperor Theodosius I (379-395 AD), it was built to meet the needs of the Eastern Roman Empire’s rapidly growing new capital, and was one of the most important harbours of the Byzantine period. Though the location of the harbour was already known – both from written sources and ancient maps – no-one knew its layout, size or exact position. As the new project demonstrates, the Harbour of Theodosius no longer lies on the shore but about 1.5km inland. This is because, over time, the area was silted up with alluvium carried by the Lycos (Bayrampas, a) River, and was then further reclaimed by farming activity and construction in the city.

Yet, beneath the silt and vegetable gardens, we have found a total of 34 ships: 13 in the aforementioned Marmaray project and a further 21 in additional excavations prior to the establishment of a local Metro link to the area. Most of the shipwrecks have been found to the east of the site – near the original entrance to the harbour mouth. Indeed, it is thought that the harbour silted up from the western end to the eastern end and remained in use until a natural disaster at the end of the 10th or the beginning of the 11th century AD – and that perhaps a particularly violent lodos (a South wind, or tsunami of sorts) largely destroyed the ships anchored here.

The wrecks provide much useful information about ships and ship-building in this era. We have discovered close to 25,000 artefacts in the Yenikapı excavations, which are shedding new light on trade, everyday life, the economy and religious beliefs in the period. Finds such as baked clay tablets inscribed with the names and places of origin of ship owners, stone and iron anchors, as well as ships’ capstans and hawsers are helping us to build up a much fuller picture of shipping and ship types in the period. Additional finds include almost 2,500 wooden items such as bath clogs, combs and spoons of a dozen different varieties. A scale weight in the shape of a bust of Athena, a bronze balance and weights, lead tablets, bread stamps, a Christ figure, glass bowls with images of Christ, leather sandals, and tools made of bone and ivory reflect everyday life in the period.

The Marmaray excavations will continue until we reach bedrock. For those who wish to see more, an exhibition entitled 8000 Years of Istanbul In The Day Light containing an array of finds will be on show in Istanbul until the end of summer 2010; and a second is due to be held later in the year.

Our research into the ships and their contents will continue for many years yet but, in the meantime, the wide and varied material found in these excavations has surpassed our expectations and added much new information to the city’s history.