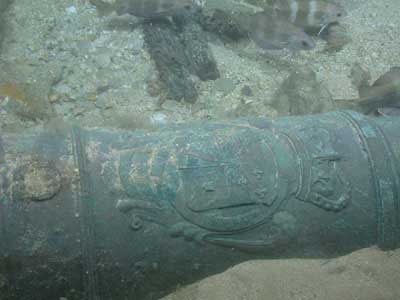 In the second instalment of his exclusive on deep-sea archaeology, Sean Kingsley reports from the English Channel, where Odyssey Marine Exploration has discovered the long-sought shipwreck of HMS Victory, lost in a ferocious storm in 1744.

Thursday 4 October 1744 was a day like every other in the city of London. The Daily Advertiser announced a lecture in Physick and Midwifry by Sir Richard Manningham at the Lying-in Infirmary on Jermyn Street. The Conscious Lover was playing at the theatre on Haymarket and the Turkey-Stone that ‘by a few Times rubbing to the Teeth, it renders them white as Ivory’ went on sale near the Royal Exchange.

Yet, within 24 hours, Britain would suffer a shock as profound as the loss of the Titanic would be on Edwardian society. Unbeknownst to the world, HMS Victory, the majestic 100-gun flagship of the Royal Navy and the greatest warship in the world, was losing her final battle against Poseidon in the English Channel. On what should have been a straightforward sail home after a successful cruise down to the River Tagus in Portugal, where she had liberated a victualling convoy blockaded by France, a ferocious storm swallowed Victory whole on 5 October 1744.

The 74-year-old Admiral Sir John Balchin, the greatest seaman of his age, was lost following 58 years of service – 34 more than Nelson – along with all hands. As The Biographical Magazine of 1776 would reminisce, ‘early in the morning the ship sunk, and every person on board perished. She was manned with eleven hundred of the most expert seamen in the royal navy, exclusive of fifty gentlemen of family and fortune, who went as volunteers. Thus one of the most experienced admirals, with eleven hundred and fifty men were lost in a moment, and passed together through the gloomy valley that separates time from eternity.’

Zeus seeks the deep
Since 2005, Odyssey Marine Exploration has been conducting an extensive survey of the English Channel, painstakingly undertaking a tedious operation that uses side-scan sonar and magnetometers to map the seabed remotely. In early 2008, Ernie Tapanes stooped over a printout of an anomaly. The pin-prick sized smudge was enough to make him list Site 25C as worthy of visual investigation by Odyssey’s 8-ton Remotely-Operated Vehicle, known as Zeus, the eyes and hands of the archaeologist in deep seas.

ROV Zeus measuring the bore of a bronze cannon in situ. Soon after, Project Managers Tom Dettweiler and Andrew Craig sent Zeus over the side of the Odyssey Explorer. The visibility at 100m was appalling as algae and sand swirled through the water column. Yet within minutes the ROV’s cameras locked onto a bronze cannon lying on its side, then another appeared – and another. A huge field of bronze cannon began taking shape. Dettweiler lost no time calling Odyssey founder and Chief Executive Greg Stemm on the satellite phone to Tampa, Florida. Stemm, Craig and Dettweiler, three of the most experienced men in the world of deep-sea exploration, agreed that the Explorer should immediately move off site. Too many eyes were watching her movements using AIS (an Automatic Identification System beacon installed as a tracking device on all vessels by law). As he hung up, Greg Stemm wondered if this discovery might turn out to be the big one.

While Odyssey intermittently conducted a non-disturbance survey of the wreckage of Site 25C between May and October 2008, with the agreement of the UK Ministry of Defence, Greg Stemm was confident that he had found Victory, yet he was still perplexed. Every living expert is convinced that Victory was lost off the Casquets, a sprawling line of malicious black rocks near Alderney. No fewer than 392 wrecks dating between 1278 and 1962 cluster around Alderney, Guernsey and Sark. Not without very good reasons are the Casquets renowned as the graveyard of the English Channel.
Yet Site 25C lies around 100km to the west. Could over 250 years of historical records and scholarship be wrong?

The Victory shipwreck?
Contemporary eyewitness accounts and physical evidence certainly seemed to place the Victory near the Casquets on 5 October 1744. Witnesses on Alderney and Guernsey allegedly heard around 100 warning gunshots firing off, according to The Daily Gazetteer of 22 October, this being the standard practice for a ship warning other vessels of navigational dangers in the area. The deeply entrenched public image of Victory’s loss at this location was supported by wreckage washed onto the Channel Isles. On 19 October 1744, The Daily Advertiser published a letter written by Guernsey merchant Nicholas Dobree, who advised that ‘This last Week there has been… Pieces of Wreck found upon our Coast; among others, two Topmasts, one 74, the other 64 Feet long, mark’d in white lead VICT; and also a Topsail-Yard, 64 Feet long, mark’s also in white lead Victy; upon the Head of the Naile to the Masts and Yard is the Arrow; to that we greatly fear the Victory has been lost upon our Coasts.’
Cannon C5 in situ with modern plastic contamination in the background.
The Royal Navy swiftly dispatched the Falkland and the Fly sloop on a fact-finding mission. The results were seemingly conclusive, with The Daily Advertiser of 22 October 1744 confirming how ‘in their Cruize they met with several Pieces of Wreck, v.z. several yards, part of a Mast, and part of the carv’d-work Stern, all which believe to belong to the Victory… there is not the least Hopes left of ever hearing of her.’ Finally, when the Casquet’s lighthouse manager was accused by court martial of failing to keep the lights burning on the fateful night of Victory’s disappearance, the reputation of the Casquets as the final resting place of her wreck seemed to be secured.