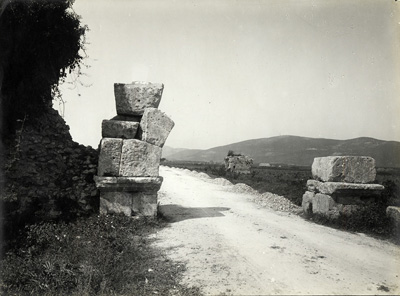 Rome is an iconic city. From Grand Tour etchings to nocturnal portraits of the cityscape, Rome’s monuments have become familiar images. Yet the British School at Rome Archive casts the metropolis and its environs in a new light, allowing us to witness the changing face of the Eternal City, and Italy itself.

Long-vanished ruins and war-torn landscapes are all preserved amongst the 80,000 images that make up the extraordinary and unique photographic archive. These rare pictures lay dormant and forgotten for many years, and it was only in the mid-1980s that the full potential of the images was grasped. The collections cover a hundred years of change from the 1860s to the 1960s, providing a fascinating and sometimes heartbreaking testimony to the often ruinous transformation of Italy during that period.

The times they are a changing

The following photographs from three of the 19th-century collections in the Archive have been selected because they reveal the wealth of the material. The first is an evocative image of the tumbled Roman arch at Priverno, in malaria-ridden countryside to the south of Rome. The ancient city of Priverno was sacked in the 4th century BC as Rome expanded across Italy, but recovered under the Empire. It faded out for good in Late Antiquity, leaving only crumbled masonry for the intrepid English Dominican priest, Father P P Mackey, when he ventured out with a camera in the 19th century.

An image of a straw village and its inhabitants near the ancient city of Gabii in the desolate Roman Campagna conveys neglect of another kind. Taken in 1894, it is a reminder of just how much the rural landscape has changed over 100 years, let alone 2,000. It is both easy and shocking to imagine that such a scene would be more familiar to Roman eyes than modern ones. The aqueduct, the Aqua Alexandrina, was photographed in 1899 where its high arches straddle the Fosso delle Centocelle. Constructed in the AD 220s, this was the last of the great aqueducts supplying Rome to be built. Its water quenched a thirst for pleasure, and fed the newly enlarged baths of Nero. The view is unrecognisable today as the whole area has been swamped by the urban sprawl of Rome’s suburbs.

It is not only the countryside that has been transformed. Father P P Mackey’s collection spans 1890-1901 and the virtue of these photographs is that they capture with remarkable clarity the vanishing world of Rome in the face of the modernising architecture of Roma capitale: Rome the capital of a unified Italy. Here we find pictures of areas of the city that would soon be lost forever, like the Medieval Torre della Legnara on the left bank of the Tiber. This tower dominated a postern in the Aurelian walls, in an area that was eventually dedicated to unloading wood from the river.

The late baroque façade of S. Maria in Cosmedin was another victim of 19th century architectural ‘improvements’ and torn down between 1894-1899. The saw mills to the right survived until 1930, before being written off as ‘shapeless shacks, perfectly suited for timber stores, scrap iron and a sack factory’. This damning epitaph reminds us that archaeology does not end with the classical world. Architectural fashion and political ambition has done away with much that subsequent ages would have found interesting.