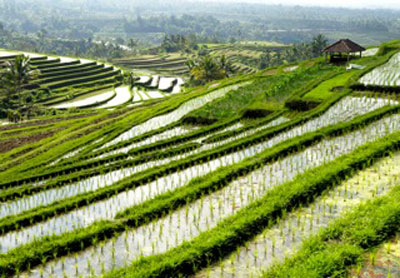 Little has changed in our relationship with water over the thousands of years from the first appearance of agriculture some 12,000 years ago into Medieval times and beyond. Even today, millions of subsistence farmers live from harvest to harvest, from one rainy season to the next, dependent on unpredictable water supplies from the heavens.

The history of humans and water can be viewed as three overlapping stages. The first goes back to the remote past and endures in places today. Water was an unreliable, often scarce, but always valuable resource, so precious that it was sacred in almost every human society. The second stage began about 2,000 years ago, accelerated during the European Middle Ages, and reached fruition during the Industrial Revolution. Water became a mere commodity: developments in technology allowed water to be pumped from deep beneath the earth and harvested on a grand scale. Water became something we could exploit without ever worrying about how much we used. Now, during the early 21st century, we are in a third stage. We are finally realising that water is a finite resource, something to be conserved and treated with a respect that we have not displayed in a long time. Looking back at how water was controlled and used in the past may be the key to understanding how best to manage it in the future.

Across the globe, there are many examples of water management by both ancient and still living small-scale societies, from the Hohokam who once resided where modern-day Phoenix stands, to Balinese rice farmers, whose irrigation is governed by ritual cycles. However, truly large-scale, arbitrary irrigation probably began with the Sumerians and Egyptians, while it was the Assyrians who put slaves to work.

The Assyrian king Shalmaneser I (1273-1244 BC), founded a small town at Kalhu, modern Nimrud, near the confluence of the Tigris and Great Zab rivers. King Assurnasirpal II (883-859 BC) chose this obscure settlement as the site for his royal palace, with an outer wall encompassing about 890 acres (360ha). Modern estimates suggest that, without irrigation, the land around Kalhu would have supported about 6,000 people. Assurnasirpal cast his eyes on the low-lying alluvial soils near the Tigris and commissioned large-scale irrigation works:

I dug a canal from the Upper Zab, cutting through the mountain to its summit, and called its name Potti- Hegalli. The meadow-land by the Tigris I irrigated abundantly and planted gardens in its area. All kinds of fruits and vines I planted and the best of them I offered to Assur my lord and to the temples of my land.

Traces of this imposing canal can still be seen in a rock-cut channel along the Great Zab. A tunnel, constructed by sinking two vertical shafts and joining them with horizontal borings, passes through a prominent bluff. The canal itself may have originated as far as 17km upstream, the tunnel serving as a regulator that irrigated about 17km².