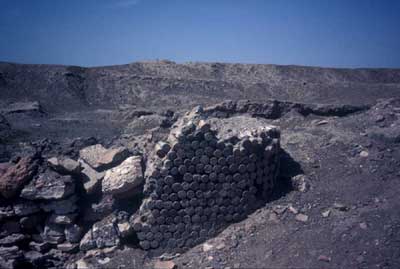 Uruk-Warka in modern south Iraq can reasonably claim to be the world’s earliest city. Today, this massive site – covering several hundred hectares – lies in the bleak desert zone between the Tigris and Euphrates rivers well to the south of Baghdad. It has an atmosphere of grandeur, abandonment, and calm.

This magnificent and uniquely important site was occupied from at least 5000 BC into Hellenistic and later times.

In the centuries around 3500- 2800 BC it expanded hugely in size at which time it boasted enormous temple complexes built of mud-brick and decorated with coloured baked clay cones and stone inlay – as on the facing page.

At about 3000 BC a massive city wall was constructed around the settlement. We estimate that the city must have housed several tens of thousands of inhabitants. It was at this time that the legendary king Gilgamesh ruled over the city of Uruk – the site’s most ancient name, which has survived into its modern name of Warka.

Moreover, the site is believed to be one and the same as the Biblical city of Erech, mentioned in Genesis as one of the first cities established after the Flood.

At sometime around 3200 BC a single person at Uruk had the bright idea of inventing writing, by using a reed or bone stylus to impress symbols and signs onto soft clay tablets. This was the start of the cuneiform (‘wedgeshaped’) script which in due course spread over the entire Near East and was employed to write at least a dozen languages, many of them totally unrelated, across Mesopotamia, Iran, the Levant, and Anatolia, until the tradition died out around the time of Christ. More than half of human history is thus recorded in the cuneiform script. Initially writing was used for administrative purposes and it was only some centuries later that it came to be used for literature, law, and to other ends.

Like all south Mesopotamian sites, Uruk-Warka was constructed largely of sun-dried mud-brick. Unfortunately for us, it does not survive the elements very well so there are no spectacular upstanding buildings to see. The one exception is the weathered remains of a ziggurat – or staged tower – dating to around 2000 BC (as shown left).

In addition to the temples and the city wall, other areas of interest include specialised craft areas for production of pottery, stone-working, and metallurgy.

Apart from fertile soil and fresh water, however, the land around the site is rather devoid of mineral resources so all metals and semi-precious stones, such as lapis lazuli and carnelian, were imported to the site from long distances, from the Iranian and Anatolian highlands.

Uruk-Warka was initially excavated by the British explorer William Loftus in the 1850s but he soon gave up, disappointed at not finding the spectacular stone wall reliefs that Layard and Botta had recently discovered in the great Assyrian cities of north Mesopotamia, at Nimrud and Nineveh. Since 1912, with some interludes, Uruk-Warka has been the focus of a long-term programme of excavation by the German Archaeological Institute, who have published many substantial volumes of reports on their work at Uruk-Warka.

I last visited Uruk-Warka in 1990. We are aware that in recent years there has been much illicit digging of archaeological sites in the region of south Iraq where many ancient sites lie in remote and unprotected areas. Nonetheless, so far it seems that local authorities have succeeded in preventing large-scale looting of Uruk-Warka.

We all greatly hope that one day – in the not too distant future – archaeologists may once again resume their work at this extraordinary archaeological site; a site of legendary kings, early writing, and Biblical fame.