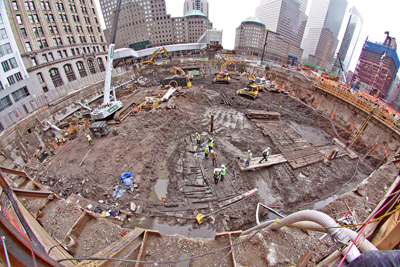 Not long after sunrise on 13 July 2010, two archaeologists descended a long aluminium ladder into a 25-ft deep pit immediately south of the World Trade Center in lower Manhattan. The archaeologists made this descent, as they and their colleagues had many mornings before over the previous months, to monitor the lumbering activities of a fleet of excavators, bulldozers, giant cranes, and a hardy crew of construction workers. Labouring to create a vast underground car park and security centre for the towering commercial and cultural complex being constructed to the north, this miniature armada was extracting millions of cubic feet of earth in rowboat-sized bucket loads. But the archaeologists had a different aim: to ensure that this wholesale redevelopment did not destroy valuable insights into the formative years of a great metropolis.

Archive documents and maps had already revealed that when Manhattan was first colonised, the site lay within the Hudson River channel. But as the settlement and trade networks grew, commercial waterfront space became increasingly desirable and progressively scarce. In the late 18th century, a programme of land reclamation allowed more sophisticated facilities to be established, paving the way for the city’s growth into a commercial powerhouse. Though a feature of most coastal cities, archaeologists are rarely able to examine these key building blocks of the urban environment, as they are invariably well below the water table and challenging to excavate. Initial assessment suggested that despite two centuries of subsequent development and redevelopment, historic layers probably sat intact beneath the modern streets and utilities. Appreciating their importance, the site’s developers ensured archaeologists were on hand to monitor construction – a precaution that yielded a history rich bounty.

Ship off the old dock

On that misty July morning, one of the archaeologists spotted an oddly curving timber protruding from the waterlogged mud of the former Hudson River bed. The possibility of a ship prompted some excited hand clearing, and, sure enough, the timber proved to be a frame, or futtock, part of the stern of an 18th-century vessel. The team’s exhilaration was only tempered by knowledge of the challenges that would accompany this remarkable find. With no time to waste, we carefully exposed the remains, protected them from the withering affects of sun and dehydration, and assembled a team of maritime archaeologists, conservators, and specialists. After a marathon week of up to 16-hour days, we had documented, disassembled, packaged, and removed the ship timbers, incorporating over 500 individual elements, some with a length of 30ft and weighing hundreds of pounds. Overall, several thousand associated artefacts and samples were collected.

Construction also exposed the anticipated landfill-retaining structures, a series of crib-like timber structures. These wooden walls served as the foundations of piers and bulkheads, forming a slip for maritime commerce from the mid 1700s until about 1830, when the area was filled in to advance the Manhattan coastline further into the Hudson. Together, ship and slip provide a vivid glimpse of the young country’s development as a commercial port. With such a wealth of material recovered, the results presented here are inevitably preliminary. Topics such as the nature of life on board the boat have yet to be addressed, while objects discarded as garbage when the land was infilled will eventually tell us much about life in early 19th-century Manhattan.