Discovering the Great Harbour of Constantinople 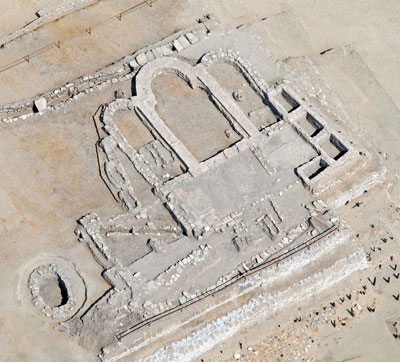 One of the most spectacular excavations in the world today is in the Great Harbour, built by Theodosius I in Constantinople (Istanbul). So far, 36 shipwrecks have been discovered – most dating to the 6th to 7th centuries AD – making it by far the biggest collection of craft known from Antiquity. How was it that such a major haul of ships was excavated? Therein lies an interesting story that Andrew Selkirk starts by looking at the transport problems of modern Istanbul.

Istanbul lies at the mouth of the Bosphorus, the narrow strip of water that provides the entrance to the Black Sea from the Mediterranean. To the mariner, the Bosphorus is alarmingly narrow, but to the land-based traveller it is alarmingly wide. When the railways arrived in the 19th century, Istanbul became the terminus of the famed Orient Express, running from Paris to Istanbul. And the 19th-century engineers prepared a splendid approach, blasting a line that followed the original city walls three-quarters of the way round the peninsula on which Istanbul stands, so that the railway ended up eventually at a grand station on the opposite, northern, side of the town. It faces onto the Golden Horn, the inlet of the sea, almost as wide as the Bosphorus, that gave Istanbul its marvellous defensive position. Thus when Agatha Christie travelled out to Baghdad, she had to leave her train and then embark on a ferry to cross over the Bosphorus to another railway station on the other side, in Asia.
In 1973, the Bosphorus was bridged by a splendid suspension bridge. But this was soon jammed with traffic, and in 1988 a second road bridge was built across the Bosphorus further up, carrying an outer motorway ring-road that should, at least in theory, keep through-traffic well away from the jams of the city itself. This, too, soon became dangerously overloaded. So it was that the idea was born to cross the Bosphorus by rail, this time in a tunnel 13km (8 miles) long, of which 1.8km (1.1 miles) would be under the Bosphorus. There were engineering problems – Istanbul lies in an earthquake zone, the North Anatolian Fault – so special flexible tunnels were designed, set in a trench on the base of the Bosphorus.

The grand project, built with the help of Japanese engineers, is called the Marmaray project, combining the name of the Marmara Sea with the Turkish word for a railway (ray). But it is not just a mainline project. Istanbul also has a problem with its underground metro system, which consists of two halves that do not join up, and which, as a result, is somewhat ramshackle. Therefore, a parallel tunnel was designed for the metro so that instead of taking just 3.6% of all journeys in the city as it does today, it would be able to accommodate 28% of all passenger journeys – similar to London and New York. And the grand interchange between the mainline Marmaray project and the metro lines would be at Yenikapı, the maritime port on the southern side of the city.

The ancient harbour
From Yenikapı, the railway dives underground and then goes under most of the ancient city of Istanbul, before crossing the Bosphorus and eventually emerging on the opposite side.
It was known that Yenikapı was also the site of the Great Harbour built by Theodosius I in the 4th century: it lies outside the walls built by Constantine but well inside those 19km (12 miles) long that Theodosius I built in 413 and that held enemies at bay for nearly 1,000 years. However, as the new railway was sited well inland from the modern harbour, it was assumed that only minor archaeological work would be needed. But as soon as construction work began they discovered that they had miscalculated.
The Theodosian harbour was much further inland than expected – silting up had taken place to a far greater extent than they had realised – and the new work would in fact go straight through the remains of the harbour in which numerous ships had capsized over the course of the centuries. Two separate archaeological teams set to work, the first to cover the work of the mainline Marmaray project, and a second team to cover the even more extensive work of the Metro project, both under the directorship of Istanbul Archaeology Museums.
The area had been gardens and allotments right up until the early 20th century. As soon as excavations began, the footings of an otherwise unknown Christian church of the 12th century were revealed. As only the foundations were discovered, with little evidence for the upper structure, it is assumed that the main building would have been of wood. But then they started discovering ships.
The Marmaray excavations are now completed. But the Metro excavations are still in full swing and when I visited, a ship was still in position under a cover building on the far side. Continuous water sprays maintained a damp atmosphere to preserve the wood. It seemed to be a massive vessel, though in fact it was a medium-sized merchantman lying on its side. The decking and the cargo had already been removed but the line of the keel was clearly visible, set bizarrely to one side of the remains. Originally, the mast step was still in position, showing that it had been essentially a sailing ship, and although this too had been removed, it was possible to ascertain the method of construction.
Mediterranean ships were built in an entirely different way to the Viking ships further north. Viking ships were clinker built, with the planks overlapping one another. Here, the planks were all fitted together with notches and wooden pegs to create a smooth surface, with the joints almost invisible to the naked eye. There had been a cargo of large container jars or amphorae, some of which contained the remains of fish bones. One always thinks of amphorae as containing wine, but in fact many of them contained garum, the Roman equivalent of Marmite, a stinking concoction made from fish – the Romans raved about it.
Several of the previously discovered ships had been very spectacular, with a large number of amphorae still in position when they sank in the harbour. Most of them were medium-sized merchantmen, but there were also several smaller vessels. Projecting out into the harbour were numerous jetties, some of which survived, though the posts once exposed to the air will inevitably disintegrate. It is a big enough task to conserve 36 boats – it is not feasible to conserve the jetties as well.
An interesting feature is a number of horse bones that were discovered alongside the jetties. Many are complete skeletons, mostly of fairly young horses. But when examined, their mouths showed traces of very hard usage. It would seem that horses were used in large numbers in the harbour, and were worked literally to death. When they died, they were simply heaved into the harbour and fresh horses were brought in to replace them.

Neolithic footsteps
Underlying the Byzantine harbour there was yet more archaeology in the form of an extensive Neolithic layer. There is little Bronze Age or Iron Age material known from Istanbul, but Neolithic material is widely scattered throughout the city. This is the first time however that the Neolithic levels have been properly uncovered.