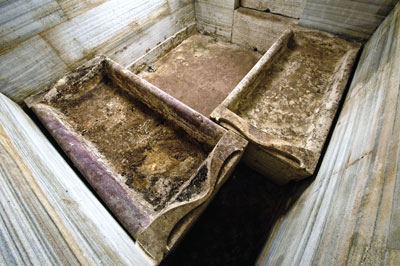 The large cluster of tumuli around Lake Kuş (Lake Manyas) – reminiscent of the Thousand Mounds of Sardis, the great royal cemetery of the father of Croesus, King Alyattes – belongs to Dascyleum. It includes burials of Phrygian, Lydian, Persian, and Macedonian nobles. Here, Kaan İren reports on recent excavations at one of these special sites: Koru.

At some point, probably in antiquity, robbers broke into the Koru tumulus, but fortunately – for whatever reason – the thief was unable to finish the job. The correct way into the tomb is through a long dromos, and from here into an antechamber and the main grave chamber beyond, both built entirely of white Proconnesian marble from Marmara Island. Four skeletons were recovered, three from the main grave chamber, the fourth from the anteroom.

These were clearly sumptuous final resting places: two Lydian-type klinai (couches) were found in the main chamber, their upper surfaces and borders still bearing traces of purple dye; and alongside them were the remains of wooden furniture, possibly a third kline.

The robbers either missed or were disturbed before finding electrum and silver coins minted in Kyzikos and dated to the 5th century BC, a gold ring with inlaid stone, little pieces of ivory appliqué, a delicate rython made of glass that was still intact, and alabaster and clay vessels – some of which still contained the remains of perfume or ointment.

Preliminary research on these artefacts suggests the graves belong to the second half of the 5th century BC and that it was built on the site of a former blacksmith’s forge. Close to the entrance of the tomb the team discovered evidence of severe burning, and further investigation revealed iron dross and discarded lead. Pottery sherds from these layers indicate the smithy fell out of use about 30 to 40 years before the tomb was constructed.

Archaeometrical research at the Koru tumulus

Soil and sediment, stone and metal, glass, textiles, leather, mortar and plaster, and archaeobotanical samples from the Koru tumulus and from Dascyleum were examined using a variety of techniques including optical microscopy, X-ray diffraction, infra-red spectrometry, and Raman Spectroscopy. In addition, microclimatic monitoring for temperature and relative humidity were undertaken in the tumulus for a period of six months.

During archaeobotanical studies at Dascyleum, the plant remains of ancient Near Eastern agriculture have been found. These include cereals (barley, durum wheat, and emmer wheat) and pulses (bitter vetch, grass pea, fava bean, and chickpea). The seed remains of alder buckthorn were also recovered from the site, which are rare in archaeobotanical assemblages of the Near East.

Rapid progress in the development of scientific and technological innovations brings with it new recording techniques: the tumulus was documented using 3D laser-scanning technique. This gave us the opportunity to collect reliable, high-resolution data in a very short time, so 3D laser-scanning has become a major tool for the documentation of archaeological sites.

Already, research is yielding exciting results. Analysis of the human skeletal remains and sediments in the Koru tumulus revealed a high metallic content, for example, which we know was caused by the site’s proximity to the ancient metal workshop that has been located nearby. Further information will be made available as scientific studies continue, and we await the results with interest.

Lying in splendour – Remains from the Koru tumulus

When we come across human remains from archaeological sites, our first question is: Who are these people? Then, where did they come from? What were they like? These were the questions I wanted to answer when Kaan İren called me to analyse the skeletons found at the Koru tumulus. Four individuals were recovered during excavations in 2010, one from the antechamber, the other three from the main chamber.

The remains of the person in the antechamber were found beneath a large stone. The skeleton had been badly damaged and was in a fragmented state – probably crushed by the stone, and possibly providing a clue as to how he met his death. The remains belong to a male of about 40 to 50 years of age, who showed signs of age-related osteoarthritis, as well as having done heavy work during his lifetime. Could it be that he was a thief, killed while trying to steal from the tomb?

By contrast, in the main, marble-lined chamber of the tumulus three skeletons were found together, surrounded by grave goods. The bones had been disturbed and scattered around the chamber, possibly by grave robbers in antiquity, but almost certainly after the bodies had decomposed.

One skeleton belongs to a female, aged about 20 or 23 years old, found under the eastern kline (couch). The second individual, a male, was discovered nearby. Traces of purple were clear on both, as well as around the grave chamber, giving us a clue to their noble status. Quantities of high-quality grave goods had been placed with the bodies, reinforcing the sense of their high status within the community. Sadly, the humid conditions in the tomb meant the remains had deteriorated too much to provide any information beyond gender and age.

However, the remains of the fourth individual, a male labelled SK1, most of which were found on the southern kline, were in better condition and may be able to give us some more answers. This skeleton belongs to an older man, possibly over 50 years of age, who was between 163cm and 168cm tall. He was healthy, although there is evidence he suffered some mild osteoarthritis in his joints and in his hands and feet. He had lost a front tooth some time before he died, but otherwise his teeth were in good condition other than a bit of plaque and thin enamel in places – but not a single cavity. He had clearly led a comfortable life, with no signs of trauma.

However, there are signs that he suffered joint inflammation caused by bony fusions around the joints. Moreover, he appears to have endured a debilitating condition that affected his backbone, inhibiting his movement. On his thoracic vertebrae there is evidence of a bony formation down the right side of the vertebrae that looks a bit like wax dripping down a candle; and two other vertebrae show signs of fusing. The symptoms suggest a condition called ‘diffuse idiopathic skeletal hyperostosis’ – or DISH, for short. While there is a genetic component to this complaint, those suffering from diabetics and/or obesity are much more at risk.

Furthermore, it should be noted that this disease is more prevalent in higher socioeconomic groups and suggests a sedentary lifestyle with a diet rich in protein and carbohydrates. While refraining from making hasty judgements, it does not seem unreasonable to suggest that, taken together, the evidence of this medical condition, the traces of purple noted on almost all the bones, the high-status grave goods, and the style of tomb, point to these individuals belonging to a wealthy, perhaps even a noble, family.

However, it is not possible to determine exactly who these individuals are from macroscopic analyses of osteological data alone. Therefore, more studies on the skeletal remains are being planned. We intend to discover their diet by analysing the carbon and nitrogen isotopes; and, by analysing the isotopes of oxygen and strontium, we will be able to ascertain whether the three skeletons in the grave and the one from the antechamber beneath the stone are local to the area, or even from the same region.