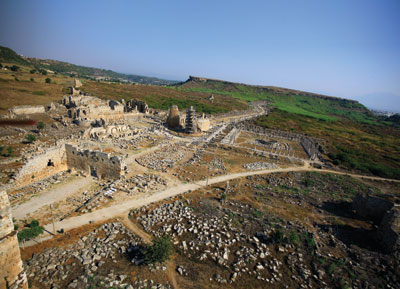 The longest-running classical excavation conducted by a Turkish University has been digging at Perge for nearly seven decades – with at least three-quarters of the city still to be uncovered.

Techniques have improved since those early days, and the trusty trowel has been joined by more high-tech equipment, including aerial photography, geo-phys, and the latest recording techniques. And, while much of what we know about Perge relates to its Greek and Roman past, we now know that the site was occupied as far back as the 5th and 4th millennia BC. Much of this evidence comes from philological studies as well as from excavation. ‘Perge’ is not a Greek word, it comes from a local Anatolian language – one of the many in the region. Nor is the great goddess of Perge, Artemis Pergaea, a Greek deity. Examination of an inscription dating to the 5th century BC that was reused on a Roman fountain, reveals that it is written in an archaic Pamphylian dialect. On it, the word ‘Preeias’ is undoubtedly an early form of the word ‘Perge’ and ‘Wanassas Preia’ translates to the later Artemis Pergaea. According to legend, the city was founded by natives of Argos, led by two famous seers Mopsus and Calchas, after the Trojan War – a version of events endorsed by the Greek historian Strabo, who called the region ‘Pamphylia, the country of all tribes’. Plinths in the courtyard of the massive Hellenistic Gateway bear inscriptions asserting this story – though, it should be noted, these do date to the Roman Imperial period. It seems probable that a settlement was already established here in the 13th century BC, and that these people merged with the newcomers. A bronze tablet discovered in 1986 at Hatussas, the capital city of the Hittites, records a border treaty between the Hittite king Tuthalia IV and the king of the Tarhuntassa called Kurunta, and it makes reference to the river ‘Ka-as-tara-ia’. This is almost certainly the Kestros. It also mentions the city Parha, which must be Perge. But solid archaeological evidence relating to the Hittite period was lacking. Therefore, in 1994 a project was set up, concentrating on the Acropolis, to shed new light on this early period in the history of Perge – or Parha. So far, we have found evidence of pottery, stone tools, and burials that suggest the site was occupied in the Late Neolithic and Early Bronze Ages during the 5th and 4th millennia BC – but, as yet, nothing that coincides with the Hittite Period of the 13th century BC. However, we have recovered sherds from the Acropolis – the oldest part of the city – that show contact with the Mycenaean world in the 12th century BC, contemporary with the ktistai (founders) mentioned in the inscriptions. In the 7th century BC, Greeks, probably from Rhodes, settled here, bringing with them their own customs, which merged with local inhabitants. At first, the city was concentrated in the Acropolis. Then, from the Archaic time, the city grew, spreading down the hillside and building defence walls on the south slope. We can assume from the style of architecture that this was an autonomous city, but with Greek influences.

Glory days
Hellenisation during the 5th century BC saw the sector on the eastern part of the hill divided into rectangular plots, and local pottery styles fell out of favour. Some walls remain from the Archaic and Classical periods, but they do not conform to any formal design.

Perge, then, enjoyed a time of great prosperity and expansion during the Hellenistic era, extending down the slope and onto the plain. The lower city was urbanised during the Late Hellenistic-Roman periods, and the new defence-works built at this time are quite different from the earlier walls around the Acropolis. Antigonus took control of the region of Pamphylia following the death of Alexander the Great. The walls of the lower city were built during the Seleucid period, 223-118 BC, and with the Pax Romana in the 1st century AD, the defence system became superfluous. The city grew once again, this time spreading out southwards. The 2nd and 3rd centuries AD, under Roman Imperial control, were the most prosperous for Perge. Almost all the standing buildings that survive today date to this glory period: the theatre, stadium, macellum (market), baths, fountains, and fine colonnaded streets. This time of splendour is best expressed by two inscriptions found during the re-erection of the remains along the main road north of the macellum. Both date to about 275/276, during the reign of the Roman emperor Tacitus. Not only do they give us information about Perge at this time, they also provide us with a wonderful insight into the pride her citizens felt for their city. The first, cut into a pier on the road, is a poem in a series of couplets, in which Perge describes herself in both the past and present:
I have been the capital of Pamphylia, since ancient times

And I was made metropolis by Zeus Tacitus

I have the appearance of a mother city

I was called ‘exceptional’ by a mighty king

He was the son of Severus; and now yes,

I am a metropolis

All the Pamphylians who live in my vicinity

Are now the chief priests of the God Tacitus.

The second inscription, engraved on the adjacent pier, is an acclamation in which the citizens praise their city, bestowing on Perge great titles of pomp and splendour:

Long live Perge! You are the only inviolable land

Long live Perge! Tacitus in you…

Long live Perge! It was Vespasian who called you ‘Neocor’

Long live Perge! You are the city famous for its Holy Banner

Long live Perge! You are the city where the silver coin was

Long live Perge! You are the treasure city of our Lord [Tacitus]

Long live Perge! You are ‘Neocor’ for the fourth time

Long live Perge! You are the first among agoras

Long live Perge! The noble senators achieve fame thanks to you

Long live Perge! The noble senators organise the contest festivities in you

Long live Perge! There is never any falsehood in your affairs

Because you have attained all these rights by the decision of the Roman Senate!

But Perge’s fortunes were linked to Rome: by the late 3rd and early 4th centuries AD, the Roman Empire was weakening and, to the north, the Isaurians were beginning to rise up in revolt. A new wall was built in the 4th century around the newest part of the city in the south.